I hope this isn’t going to be the blog post equivalent of that friend you have who sees you occasionally in the street, smiles brightly, and as they zoom off into the distance they cry breathlessly “We really should catch up for coffee sometime!” And then you don’t hear from them for three months.

I apologise for being woefully slow at updating. Sure, I have been busy, but I haven’t managed to convince Tim of my theory that since turning 22, approximately 25 minutes out of every hour just vanishes. Even now, I should be doing useful things, like washing my hair and packing for my business trip (the airport shuttle arrives at 8.00am tomorrow), re-editing my essay and maybe getting to sleep an hour ago.

A sign of my commitment: The promised peanut butter popcorn.

So, I attempted the notorious recipe on Hot Garlic’s site.
I’ll be frank, cold even: I’m not one of those sorts for whom a peanut butter sandwich is a good time. The idea of schmeering it on popcorn was faintly troubling. But, won over by enthusiastic testimonials, I gave it a go.
It was so good that after Tim and I wolfed it down like famished hyenas, I promptly made another batch. Oh sure, popcorn is good, but smothered in peanut butter and chocolate? (and you know I augmented the amount of butter that the recipe recommends) This stuff is remarkably delicious, and a testament to that old saying “the whole is greater than the sum of its parts.”
Speaking of corn and the magical forms it can take…I have a new favourite gluten-free cake. Much as I love chocolate I find those super-rich flourless cakes can be cloying, throat clogging and frankly a little samey (although yes, delicious.) I don’t mean to sound condescending and bandwagon-jumping to the genuinely intolerant, once you make this cake all fist-shaking thoughts will fly airily from your wheat-shunning minds.
I found the recipe in the New World supermarket magazine…a mag that I’m not a huge fan of but which regularly redeems itself with such finds as this.

Lemon Poppy Seed Cornmeal Cake
Disclaimer: the cat is faceplanted on my left leg and I don’t have the heart to shove him off and find the recipe so I’m transcribing it from memory. I’ll change any erroneous details asap.
250g soft butter
1 cup caster sugar
3 eggs, separated
Juice and zest of 2 lemons
1 cup cornmeal (aka polenta…not instant though!)
1/2 t baking powder
150g ground almonds (there’s no escaping them)
2 T poppyseeds (my contribution to the recipe)
Cream the butter and sugar together, add the egg yolks and lemon juice/zest. In another, non-plastic bowl, whip the egg whites till stiff. I know it’s a pain when recipes ask for separated eggs, but persevere. And don’t kick it old-school like I did and manually whisk the whites. It hurts. Add the cornmeal, baking powder, almonds and poppyseeds to the butter/yolk mix and then gently but robustly fold in the whites. Bake in a 22cm, greased and lined tin for an hour – about – at 175 C. When it comes out of the oven, squeeze over more lemon juice, mixed with a little icing sugar, which will settle deliciously into the cake.
Mine got a little (okay, very) dark in the oven, so keep an eye on it and cover with tinfoil if you’re worried. This cake is intensely good – soft, moist, tangy, lemony, ohhhh I’m drooling quite immodestly right now just thinking about it. 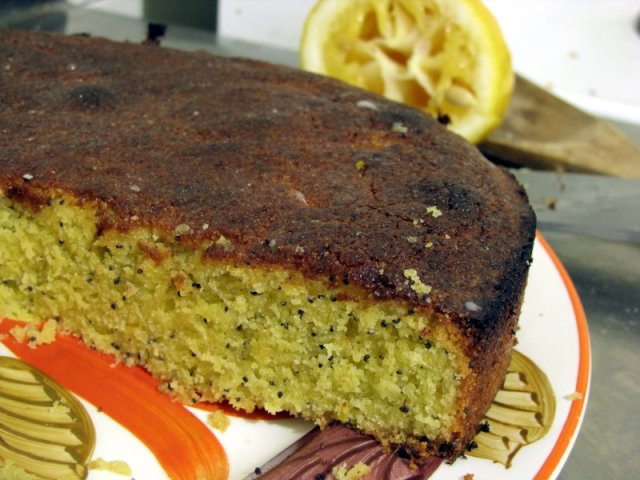 And within, a gorgeous, rich, distilled-sunshine colour. I don’t know how long it lasts because we ate it stupidly fast, but I daresay it has a few days in it.
A million thanks to those who watched and commented on dad’s protest video in my last post. And if you haven’t watched it, may I not-so-subtly direct your attention towards it with my many links? Truly though, it means so much! We’ve amassed over 700 views on youtube already, which is pretty amazing since, well, Otaua village is pretty tiny and we only have so many friends and friends-of-friends to sing its praises to. So, to those of you who actually did watch it, a heartfelt thanks. And watch it again! It’ll be grand!
Speaking of youtube I have been monumentally distracted lately by the thoroughly engaging and HILARIOUS new musical called [title of show], about two guys writing a musical about two guys writing a musical about two guys writing a musical…if you like Flight of the Conchords AND Broadway (the latter is kind of necessary, lots of it goes over my head I’m sure and I consider myself fairly well-versed) then you’ll love it. But here’s a clip giving you a little more info anyway…It’s going to close soon so if any of my readers are ridiculously fortunate enough to be living in New York, go see it!

Finally – what is that substance on our mossy, damp patio? Could it be…sunshine? Okay, so it rained all day today, but this patch o’ concrete literally hasn’t seen the sun since about February.
And I know I’m wearing odd socks, I’d like to think it represents my free-spirited, left-brained, artistic temperament but some would say it merely represents my inability to find matching socks.

9 thoughts on “Corn As High As An Elephant’s Eye”