Occasionally, in the middle of the night, I’ll lie awake possessed by such thoughts as: If the year 2006 was two years ago, and I started uni in that year, how can I have finished my three year BA course this year? Don’t even try to work that one out or your brain will dissolve like baking soda in milk. But wait, there’s more. I possess an extensively vivid imagination, which is lovely if I want to write an allegorical children’s tale about a rabbit that falls in love with a whale, but it’s not so merry when I’m losing the battle with my brain which is thinking all sorts of things when I’m supposed to be asleep: New Zealand’s worst earthquake being moments away, Tim being hit by a bus, never seeing Wicked, killer pelicans enforcing their fascist regime upon us all.

At times like these, the only thing that really soothes – nay, distracts the mind, is thinking about baking. During a particularly awake moment recently, I came up with making the Breakfast Bars from Nigella Express. I had a tin of condensed milk kicking round and wasn’t sure what to do with it – caramel slice seemed too arbitrary, and for me there’s something rather seductive (culinarily speaking that is) about rolled oats, which the breakfast bars have by the truckload. And before you conclude that I’m totally batty, trust me. We’ve all been there, you know, watched the late night news, bogged down by everything going wrong in the world, unable to sleep in case you should be bottling your own urine because of the inevitable global shortage of water…just think about making cupcakes, or indeed any kind of sweet thing. It’s a bit like saying “happy place” over and over but more practical…and with cake at the end. 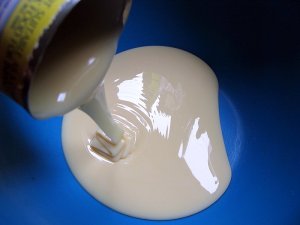 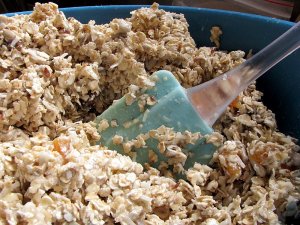 Preheat oven to 130 C, and oil a 23x33cm baking tin or throwaway foil tin. Warm the condensed milk gently in a pan till it is more liquid than solid. Remove from heat and then add the rest of the ingredients, stirring carefully with a spatula so everything is covered. Even out the surface, then bake for about an hour. Let cool for about 15 minutes then slice up. You should probably know that I left out the nuts, swapped the expensive cranberries for a cheaper mix of chopped dates and dried apricots, and that these do indeed make a brilliant breakfast on the run. 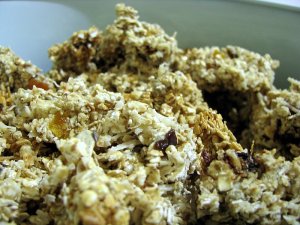 Above: They get better the longer they sit too. So if you can, try and hold off for a bit.

Something else keeping me up at night – but with happy anticipation – is the annual flat Christmas dinner which is going to be this Sunday. I cook the whole thing, the flat gets together with a few other usual suspects and we have a jolly meal before inevitably going our separate ways. It is always fun coming up with the menu, which this year needs to be both gluten free and vegetarian friendly as keeping with the needs of various people who will be attending. This isn’t a problem, you’d be amazed at how diverse Nigella’s recipes are…Here’s my menu concept so far:

2 roasted free range chickens
Cornbread stuffing (from Feast, with flour omitted to make it gluten-free)
Pear and Cranberry stuffing (from Nigella Christmas)
Roast pepper and pomegranate salad (from Nigella Christmas)
Involtini (eggplant dish from Nigella Bites as vegetarian main)
Honey Roasted Parsnips (from How To Eat)
Steamed new potatoes with mint from the garden
Peas
A big lettuce salad (ie, buy bag of salad leaves, upend into bowl)
Bread rolls (So Tim can have his requisite amount of carbs)

Pudding:
White Chocolate Almond Torte (Forever Summer)
Dark Chocolate, Walnut and Fruit Torte (basically a pavlova with all manner of good things stirred into it before baking…I’ve adapted the recipe from a few different places)
Sugar Free red and green jellies (which Tim will be in charge of)
Fresh fruit

I’m also going to try my hand at Poinsettia, a mix of white sparkling wine, Cointreau, and cranberry juice…the recipe is from Nigella Christmas and sounds completely drinkable…But you’ll hear more about all this later on in the week. It’s a lot more simplified than last year’s menu – just one meat course, veges which don’t need roasting (the fact that EVERYTHING needed oven space last year was a logistical nightmare) puddings that can be made in advance, and stuffings which are both vegetarian so I can roast whatever doesn’t fit inside the chickens and serve to everyone. We rarely eat chicken – probably once every 6-8 weeks, if that – well, I want to get the proper stuff when I do eat it but it’s soooo expensive – so I’m pretty excited about that.

10 thoughts on “Visions Of Sugarplums”