I realise most food is better for you in its most untampered, natural, unadulterated-by-animal-products form, but some things about going full raw don’t quite sit right with me, and it’s not the obvious (no butter). Take that stalwart of the non-meat eater’s reportoire, lentils. Lentils are so good for you it’s almost obscene, but how are you supposed to eat them raw? Hmm? And then what about potatoes? How do you eat them without applying heat of some kind?

Though, complex being that I am, I can get every bit as excited about the rawest of raw vegan recipes as I might over some butter-thick seven layer chocolate cake. Sometimes you read through an ingredient list and everything just makes sense. This happened when I was perusing Elle’s New England Kitchen and found this recipe for Cinnamon Rolls. The name is basically correct – there’s cinnamon in there and you roll them up – but don’t go getting a mental image of some kind of buttercream-smeared sticky bun. This is a whole different beast, and it’s probably better to think of it as a Cinnamon Roll in its own right, rather than a substitution for something else. Funny how you often have to go through these mental processes when eating ridiculously healthy food – “this is exciting, this is a treat, I’m not missing out at all“.

Anyway, I was reading through the recipe and realised I actually had all the ingredients in my pantry – even the agave nectar, which was a Christmas present last year. The method sounded fun and Elle painted an enticing picture of how the finished product tasted. So on Monday I set aside my buttery prejudices for the time being, and gave these Cinnamon Rolls a go.

It’s slightly terrifying in places – the sushi-style rolling of the mixture had me worried, plus the slicing of the now rolled up log, which threatened to crumble every time the knife came near it – I guess I’d go to pieces if someone was trying to cut me up too, haha – but overall it is very do-able, with plenty of faffing and stirring and mixing and measuring to make you feel like you’re actually doing something in the kitchen.

You can just, of course, simply call them Cinnamon Rolls, but I like to keep the “raw vegan” bit there at the start in the same way that if I actually wash the dishes I like to tell Tim about it repeatedly – why yes, I would like a medal for it, and thank you.

Don’t go freaking out at the list of ingredients – it’s all pretty simple straightforward stuff really, and most of it can be found very cheaply in both supermarkets and health food shops. Substitute honey for agave nectar if you like, if anything it would probably add a more complex depth of flavour – agave nectar is viciously sweet and not much else.

I am not the hugest fan of ground flaxseeds – the texture and flavour can be all murky and gluey. However – lesson learned – whole flaxseeds don’t really grind themselves down in a food processor. If anything, the whizzing blades make them ever more defiantly whole. Luckily this didn’t affect the finished product, however I imagine the texture would be a bit different – and probably less crumbly – if you use the ground flaxseeds that the recipe actually asks for.

Tip the flaxseeds, almonds, 1/2 tablespoon cinnamon and pinch of sea salt into a large bowl.

Blend the dates and water till very smooth. I actually soaked the dates in boiling water for about half an hour beforehand just to make them super soft. Scoop out just over half and mix it into the flaxseeds/almond mixture, along with the olive oil and agave. Mix really well – it shouldn’t be too dry but add a tiny bit more date mixture if it does.

Carefully flatten this mixture on a sheet of baking paper, making a good sized square of around half an inch thick. Add the rest of the cinnamon to the the date mixture in the blender, along with the sultanas and pulse briefly to mix. Spread this thinly and evenly over the square of mixture, making sure all surfaces are covered to the edge. Sprinkle over the nuts and a few extra sultanas.

Here comes the tricky-ish bit – using the baking paper for help, carefully roll the mixture into a tight, fat log. Don’t be afraid of it – the mixture should hold together. Keeping the log wrapped in baking paper, refrigerate for an hour or so to let it get good and firm. Slice into discs as thin or as thick as you like, using a very sharp knife. The good thing about this mixture is that if a slice looks like it might fall apart, you can simply press it back into shape using your fingers.

If you want – feel free to top it with this intriguing mixture.

Blend the cashews thoroughly with the water. Add the honey and orange juice and continue to blend till the mixture is thick and smooth. What with my palate being used to buttercream and such I wasn’t sure how to take this, but as you can imagine something that full of cashews must taste good. 6 Tablespoons seemed like a lot of honey to me, but you need it for the texture – I stopped at three though. Instead of the orange juice I used a couple of drops of Boyajian orange oil, basically because I have some in the fridge and like to think it’s a useful purchase. This becomes a thick, hummus coloured mixture that is strangely good…I think next time I make these I’d be just as happy to leave the cinnamon rolls uniced. 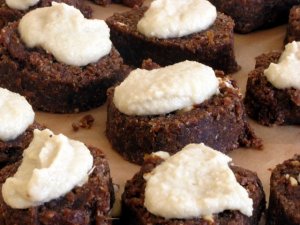 These are actually…completely delicious. Nutty, rich, wholesome but toothsome, and warm with cinnamon. One roll is pretty filling – I guess it’s all the protein and such – and keeps you full of energy for a long time. Of coure, let’s not get carried away, these are possibly hugely calorific, what with all the nuts and dried fruit and oil and so on…but – and I hate focussing on calories anyway – you can be assured that every particle, every last molecule of these is doing you good. They’d be sweet as without the topping but I guess it makes the finished product more aesthetically pleasing, as well as providing a bit of textural contrast as you bite into each disc. I’ve been eating them for breakfast for the last week and I definitely make it through to lunch without wanting to eat my body weight in chocolate – not a bad litmus test of any foodstuff, really.

Last night we saw Mamma Mia, of which New Zealand was lucky enough to host the international touring cast. A friend of ours from England is in the cast and got us tickets to their final show. The story is more lightweight than a baby kitten holding a helium balloon but it’s great fun, the cast was gloriously talented and classy and we spent the whole time grinning away, even though neither of us are what you’d call ABBA fans. Hilariously, one of the male leads was played by Michael Beckley, known to New Zealand audiences as Rhys from Home and Away…It was also a bit mind-boggling just catching up with this friend of ours in the cast – she’d been a student at the performing arts school in England that Tim and I worked at in 2005, and now she’s in the international tour of a top-selling musical. She’s the first person we’ve seen (in person, Facebook doesn’t count) from that time of our lives and it felt a bit like Glinda dropping in to see Dorothy in Kansas or something – a strange overlapping of worlds. But fun!

On Shuffle while I type:

Junk – a collaboration between Eyedea and Abilities from their album By The Throat. I love it. It’s one of those songs that cleverly combines minty freshness with the feeling that you’ve heard it a million times before already.

Next time: Everything’s been a bit plantain-heavy lately – I do get overexcited by stuff – and so I have lots to show for myself. Will try and get on to it a little swifter than I was with this post!

10 thoughts on “raw into gold”