Achtung: I’m STILL hyping myself up about being nominated for CLEO magazine/Palmolive Wonder Woman (Read more about it here.) There’s still time to help out – just email cleo@acpmagazines.co.nz with WONDER WOMAN in the subject line and “voting for Blogger: Laura Vincent” in the body of the email. (FYI – you can only vote once) I should change my name to humbleandfrozen because of how nice so many people have been about this – whether or not I get anywhere, it has still been a fun wave to flutterboard on. 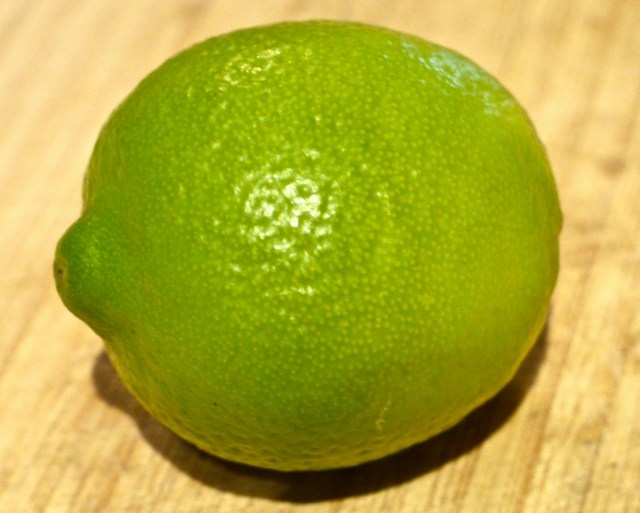 As I mentioned last time, Mum sent me a large box of gorgeously green limes. I hadn’t really done much more than sniff them luxuriantly, and throw a glossy wedge into the occasional glass of vodka and soda water. Until tonight, when I made this incredibly fantastic dressing from Nigella Lawson’s Forever Summer.

This recipe harnesses the power of one. whole. lime.
Lime Dressing
From Forever Summer
1 bunch (approx 125g) fresh coriander, or mint, or a mixture of the two
1 clove garlic, peeled
1-2 tablespoons fish sauce (you could make this vegan by using soy sauce)
1/2 a teaspoon sugar
1 green chilli, deseeded (optional)
1 lime
6 tablespoons rice bran oil
Cut the top nubby end off the lime, sit the now-flat end on a chopping board, and carefully slice off all the skin and pith. Cut off the other end, halve the now-peeled lime and flick out any seeds with a knife. Mine luckily didn’t seem to have any seeds. Throw the lime, and any juice that has collected, into a food processor with everything else except the oil. Blitz to a paste, pouring in the oil as you go. By the way, I only used half the oil because even for me that felt like a lot, but then if you were serving more people, you might want to keep the original quantities or even boost them, along with the rest of the ingredients.

This dressing is just perfect – sharp and full of lime, fragrant with coriander, deliciously salty, but not in the slightest bit oily. I could have drunk the stuff. Once I finished dinner, I not only licked the plate, I also ran a spatula around the inside of the food processor and licked that, and then finally – I’m sorry – ran my finger along the processor blade, picking up the excess dressing clinging to its slicey edges, and licked that too.
In Forever Summer, Nigella pairs this dressing in a salad draped with fried squid rings, and lovely as that sounds I didn’t have any of the ingredients. I took the liberty of pouring the dressing over a pile of flat rice noodles, carrot slices and soybeans, with a final sprinkle of black sesame seeds (Handy tip: don’t go pouring them over someone else’s plate while saying “Look! Ants!”) It might not sound like much of a dinner, to the point of barely even existing (when carrot slices are part of the main thrust of your meal it’s probably time to do some more groceries) but think again. The dressing soaked into the soft, silky noodles. The buttery, nutty soybeans contrasted marvelously with the sharp lime in the dressing. The sesame seeds provided a little crunch. The carrots…well, they were there too. But altogether it was damn special stuff. By the way, I recommend Forever Summer hard – it’s full of some of Nigella’s most inventive-yet-classic, beautiful food, and an amazing and inspiring ice cream chapter.
I had a couple of days off in lieu which was pretty amazingly blissful – not having an alarm clock in the morning was a nice feeling. All the good sleeping patterns were undone on Tuesday night however as we stayed up to watch the All Whites’ first game at the FIFA World Cup against Slovakia in South Africa, beginning 11:30pm our time. As if we were ever going to miss it – it was a thrillifying match, with Winston Reid’s equalising goal in the 93rd minute causing a complete rush of intense happiness to all of us watching. To be beaten at the World Cup is no disgrace, considering the eye-watering level of talent present, and considering New Zealand hasn’t been there in 28 years. But to draw against a team that’s miles ahead of us in the table – that was special. While what I know about sports could fit on one side of a black sesame seed, I can’t wait to see our next match against Italy – they’re one of the best teams in the world, so to simply prevent them scoring, or lose by a small margin is still some kind of victory. Although we might win…that’s what’s exciting about it, that we just could win a game. Pity the official All Whites scarves aren’t longer though – not very practical in windy Wellington to have something that doesn’t wind round the neck several times.
_______________________________________________________
Title via: Bright Eyes’ Lime Tree from his 2007 album Cassadaga. There’s only so many winsome male singer-songwriters I really ever need to listen to, but ol’ Bright Eyes makes the cut easily with his earnest, swoonsome songs. There’s something about the music behind this track that makes it sound like it could run over the opening credits of some 1930s film involving wide American plains and several scenes in a charming general store, which is more than enough reason to love it in my opinion.
_______________________________________________________
Music lately:
XXXO, MIA’s new single. I’ve long been a fan of MIA and new music from her is always greeted eagerly. It amuses me to read pearl-clutching comments on youtube (not that reading youtube comments is ever a good use of time) about how “mainstream” this sounds. I personally thought this song couldn’t be any less mainstream if it tried, but whatever. It always amazes me how MIA manages to be more or less what you’d call pop, but also a million miles removed from everyone else out there doing it. The chorus reminds me of all the best bits of those Real McCoy songs I used to adore. Can’t wait till she drops the album.
Connection by Elastica, from their self-titled album. I love gurgly opening riff and wish I could deliver anything as breezily as Justine Frischmann sings those lyrics.
Raul Esparza’s knee-wobblingly good cover of The Man That Got Away. Every particle of that man is filled with vocal talent. He needs a solo album, and fast!
______________________________________________________
Next time: Well, I still have this box filled with limes…don’t think I’m done just yet.

11 thoughts on “under the leaves of that old lime tree”