As I said in the sign off for my last post, I’m probably going to have to lay off the Nigella Kitchen recipes before I end up recreating the entire book here, because I’m not sure it would go down well with her camp (that said, there are a squillion food blogs out there and I doubt her camp is watching me. If they are…hi Nigella, you’re amazing!).

Anyway, here we are again with Kitchen. While I’m more than happy improvising dinner from what’s around, it’s nice to look at a recipe and realise you actually have everything and you don’t have to make any special trips or put it off or never even consider making it ever (like that cake in How To Be A Domestic Goddess which has about a litre of real maple syrup in it). Nigella’s crustless pizza recipe is a nice example of this as I had everything, even the more expensive cheese and chorizo, within reach. Not that there’s a lot to it. A little flour. One egg. A cup of milk. Somehow it turns into a seriously good dinner. I wish I’d known about this back when I was a hungry student. 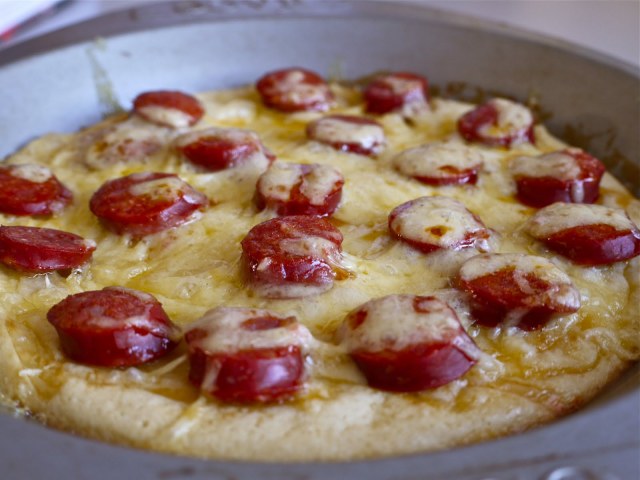 Nigella’s description of her Crustless Pizza was a little confusing – I pictured a pile of melted cheese and toppings especially when she says “think of it as a cheese toastie, without the bread”. So…just cheese then? I thought it turned out more like a giant pancake myself, but the main point is, it tastes absolutely amazing and comes together when you think you’ve got nothing in the cupboard.
Crustless Pizza

From Nigella Lawson’s Kitchen
Serves 2 – 4 but I wouldn’t want to share this with more than one other person.
1 egg
100g plain flour
250ml (1 cup) milk
100g grated cheese
Optional – 50g chorizo, sliced finely
1 round ovenproof pie dish, about 20cm diameter
Set your oven to 200 C. Whisk the egg, milk and flour with a little salt to make a smooth batter. Butter the pie dish, pour in the batter, using a spatula to make sure you get it all, and sprinkle over half the grated cheese. Bake for 30 minutes. While it’s baking, get your chorizo ready. Once this time’s up, sprinkle over the chorizo slices and remaining cheese and bake for another couple of minutes till it’s all melted. Cut into four slices. 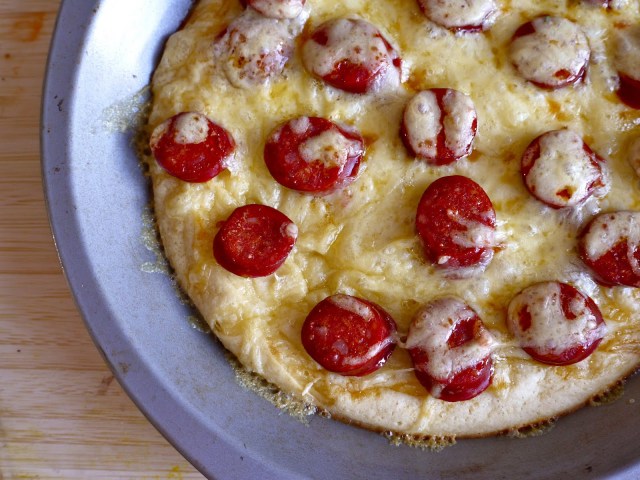 I was nervous about it sticking to the tin but using a plastic pie-lifter fish slice thing it came away easily. I did butter it pretty generously though, and if you’re worried that you’ve got a sticker of a pan on your hands maybe you could go to the trouble of cutting out a little circle of baking paper. Or, you could just eat the whole thing straight from the pan, digging it out with a fork… it’s what I’d do. 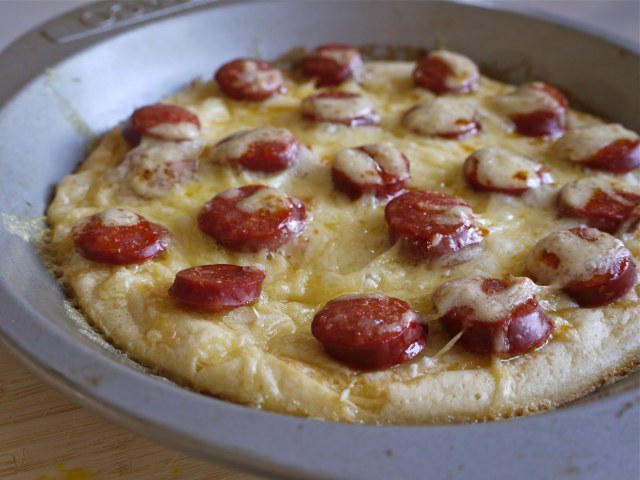 It’s not crustless at all, more like sort-of-crusted, but that just sounds bad… The egg, flour and milk forms a deliciously thick, crisped pancake-like base for the cheese and chorizo. I just loved how simple and fast it was and couldn’t believe that so few ingredients turned into something so delicious and comforting to eat – but then I just love melted cheese. You could probably replace the milk with soymilk and leave out the cheese to make the base dairy-free, but how to replace the egg is a bit beyond my skills, however if you’re a vegan maybe you’ve already got an artillary of egg-replacements up your sleeve and don’t need me to clumsily google them for you. Of course the chorizo doesn’t need to be there – although it is delicious, all oily and spicy – it could be replaced or supplemented by any number of things, the obvious one being tomatoes…
_______________________________________________
Title via: Horse The Band’s Crippled By Pizza, just one of their heavy, driven odes to pizza. Even if you don’t like their hardcore sound, there’s something likeable about an EP devoted to pizza.
_______________________________________________
Music lately:
Mara TK’s the main vocalist for Electric Wire Hustle who we saw earlier on this year electrifying the packed crowd at San Francisco Bath House. Like many local artists, he doesn’t stick to just one project, and he’s now got some solo stuff happening – check out Run (Away From the Valley of Fear) on his bandcamp site and watch out for more mightiness from him in the form of Taniwhunk, his pending EP.
On Saturday night Tim and I headed to Watusi to check out Eddie Numbers who was down from Auckland. Our flatmates brother was on the decks and while it was well, an intimate set (I guess not many people knew it was happening) it was fun and I’m glad we went. I’d already heard some of his stuff here and there (specifically Cracks In The Evening) and it was cool to see someone talented doing what they love, he even dropped a Wellington-specific freestyle on the spot. I’ve sadly forgotten the name of the guy who was on stage with him but he had a sweet voice too….
_______________________________________________
Next time: I made an awesome crumble tonight, the lighting was low and the camera battery ready to fall asleep but I managed to get a few good snaps, I also made this awesome pasta recipe from the Floridita’s cookbook…
http://www.facebook.com/plugins/like.php?href=http%3A%2F%2Fwww.hungryandfrozen.blogspot.com&layout=box_count&show_faces=true&width=450&action=like&font=arial&colorscheme=light&height=65

11 thoughts on “that one treasure, thick golden crust and a layer of cheese”