In case you missed out on the really-exciting-for-us news outlined in my last post, Tim and I are going on holiday in April! To London, Berlin, Krakow, Warsaw, and LA! I’ve been to the first four of those before but that was many, many years ago, so if you know something good we should do, or if you’d like to be so kind as to extend us a couch for the night on account of how nice we seem (seeming is believing), or just have some insider knowledge like: “there’s a new kind of currency!” or “You mean you haven’t had your wombat vaccination?” etc, we’d be hugely obliged if you’d share it.
I guess this is a pretty exciting thing in our fairly mellow lives but I’ll try to not talk about it to the point where you want to hoof your computer out a window in despair. I realised the other day that because this is our first holiday together and because it’s such a big deal to us, we sometimes dope-ily end up projecting our feelings of extreme happiness onto other people, like we’re all in this together and every single bank teller and travel-centre person and colleague and email contact are singing and dancing in jaunty formation like one of those TV ads where that sort of thing happens.
But bear with me. Till we actually leave the country we’re trying to spend as little money as possible, which means just buying bare minimum stuff (milk, soymilk, eggs, bread, frozen peas, Dust-Bix for Tim, oats for me, butter for twenty…still) and trying to get creative with what already exists in the cupboard. We’re really lucky that we live so close to a good vege market so all our greens can come from there for a cheeky tenner. As I said last time, we’ve done it before, but this time there’s something really fun to look forward to at the end.
Not everyone’s a food-loving food hoarder like me, so we’re definitely going to do okay – considering I’d absentmindedly bought two separate kilo bags of bulghur wheat. For example. I had this bottle of cream that had been leftover from when we had friends over for dinner, and half a bag of blackberries taking up space in the freezer. Neither ingredients are overly expensive but admittedly they’re also not necessarily the sort of things you’d always have mooching round waiting to be used. Unless you’re like me. 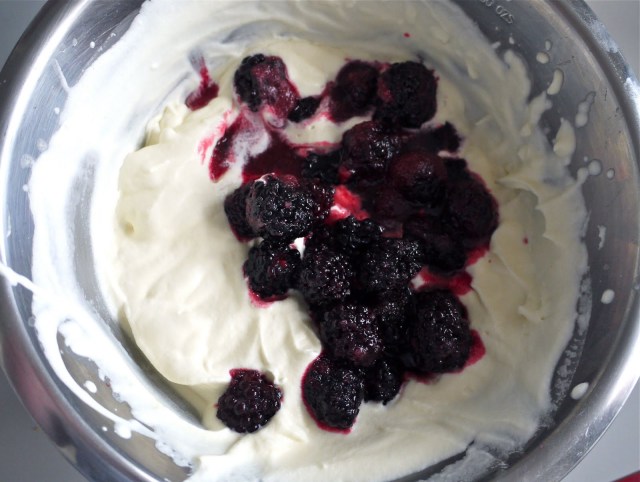 The cream needed using and a pudding – specifically, a Fool – came to mind. While the blackberries themselves could’ve sat round happily in the freezer more or less forever, the idea of a Fool wasn’t leaving my brain. By the way a fool is just a bowl of whipped cream with stuff (usually fruit) folded through it. Then eaten. It’s a simple, but bold concept.

This recipe is very, very easy. It uses but three ingredients. And for a moment, you get to pretend you’re in one of those TV ads where mixed berries and and a dairy product fly through the air at each other in slow motion to indicate how hardcore-ily fruity and authentic their product is.
Blackberry Fool For Two
1-2 cups frozen blackberries (I specify a vague quantity because I like to walk past the bowl and eat the sugary berries while they wait, so it pays to have back-up…)
1/2 cup sugar
1 300ml bottle chilled cream (or around 1 cup cream plus a splash more)
Place your berries in a bowl with the sugar, and leave for an hour or so – they’ll defrost some, and their juices will absorb sugar and create gorgeous dark purple juices and it’ll be all good.
Whisk your cream in a good-sized bowl – you can use electric beaters if this is easier for you, but I like to just whisk – until significantly thickened, and when you lift the whisk a peak of cream follows it. You don’t want it too whipped though – keep it soft and relaxed of texture.
At this point, grab a spatula and carefully fold the berries and their sugary juice through the cream for a few seconds. You’re after a kind of swirled pink and white look, not completely blended. Divide between two bowls, eat with a spoon. 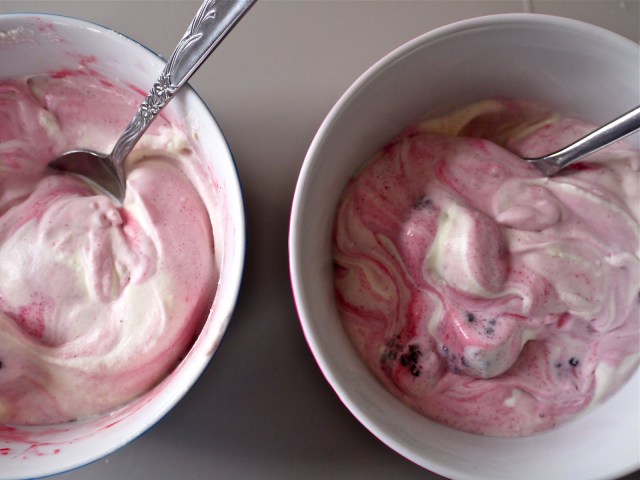 Essentially you’re eating a bowl of whipped cream, but the Fool has been around longer than all of us, with its origins in the 1500s (when it was known as ‘Foole’) and no doubt it’ll be round in centuries to come. Probably because it’s completely easy, but is still an actual thing that you can serve up with deserved pride. And importantly, it’s incredibly delicious. A soft, cool mass of creaminess colliding with sharp, collapsing, superjuicy berries. It makes so much sense.