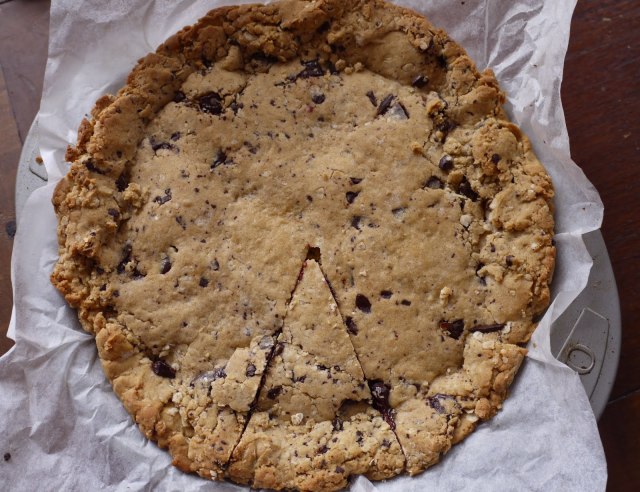 But before the pie, one thing. I’m not even sorry for lulling you into a false sense of pie-related security, that was in fact my aim.
After becoming besotted with Parks and Recreation and watching it fanatically with Tim, I couldn’t work out who the character of Ron Swanson reminded me of. And then, while looking through photos, it hit me: Rupert, our dead family cat.

I even uploaded this unfairly terrible photo of myself with Rupert so I could say: See? Look at the similar contempt in their eyes. Their comparable face shapes. Their pelts, both elegant and abundant. The resemblance doesn’t stop at the physical or the disposition, either. Like Ron, Rupert’s appetite was legendary. I’m pretty sure had we offered it to him, he wouldn’t have turned down The Swanson (that’s a turkey leg wrapped in bacon.) 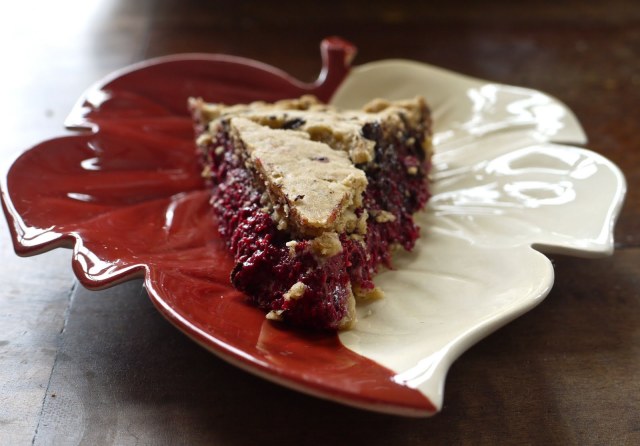 Anyway, unsparing self-indulgence aside, here’s some pie that I invented…self-indulgently.
I’ve had this idea tucked away in my brain for a week or two, but only had the time and energy to test it out this morning. That idea was: what if I made a pie, but instead of using pastry, I used cookie dough? It’d be like there was a giant cookie on top! But it’d be a pie! You can see how I got so enthusiastic about this.
I mean, I really thought this was a good idea. Luckily for me, it actually worked out well, because I can’t predict what would’ve happened to my self-esteem/general demeanour if it had tasted awful or broken in half or something – I made such a huge mess of the kitchen in the process of making this and it was gratifying to have something delicious to justify it.
I guess you could employ near-on anything in the filling, but I wanted to use things I already had, which was frozen blackberries, dessicated coconut, and a little dark chocolate. The custard powder acts as a thickening agent, but importantly, along with the coconut, absorbs the bulk of the berry juice, thus preventing it seeping into the pastry and becoming soggy. This was my assumption, and it did exactly what I’d hoped. Apart from the sheer uncertainty of it all, and my chronic clumsiness meaning that there was a large and suspicious looking pile of baking powder on the floor, THIS PIE IS SO STRAIGHTFORWARD that I had to put that bit in capitals in case you were scrolling through this in a bit of a hurry and not really properly reading it, because (a) it’s a very important point and (b) people do that, we’re only human. 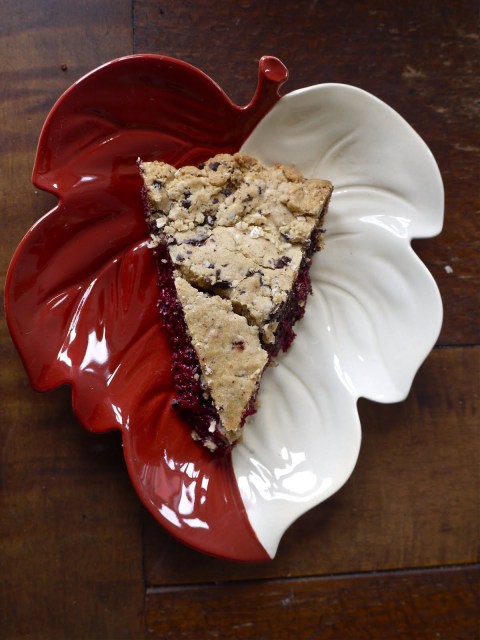 It’s not only straightforward, it turned out vegan, so feel free to feed this to near-on anyone you like (except Ron Swanson, who probably wouldn’t appreciate that there was no meat was involved.)
Blackberry Coconut Custard Chocolate Chunk Cookie Pie (it’s a good name, right?)
Cookie Dough Pastry
Follow this recipe, leaving out the spices, but adding in a teaspoon of cinnamon. Note: the texture of the dough when I made it this time round was much more traditionally cookie-like, but I honestly think I forgot half the flour when I made it last time. Depending on your ingredients the results may vary but it should be recognisably like cookie dough.
Roll out a decent handful of the dough and carefully lay it in a pie plate (as you can see from the photos, I put a sheet of baking paper in the pie plate.) Press it down, but don’t bother to trim the edges too much. Refrigerate.
Roughly chop about 70g dark chocolate (I used Whittaker’s Dark Ghana) and stir through the remaining dough. Roll out another decent handful of this dough into a rough circle.
Filling:
2 1/2 cups blackberries (or whichever frozen berries you like)
3 tablespoons custard powder
1 tablespoon golden syrup
2 generous teaspoons vanilla extract or paste
1 cup dessicated coconut
Mix everything except the coconut in a small pan, so that the berries are covered in the custard powder. Heat gently, stirring constantly. The berries will start to release their juice which will absorb the custard powder, slowly becoming brighter in colour. Slowly bring to the boil, by which stage it should be pretty liquid, then simmer for about three minutes, stirring the whole time. Stir in the coconut and allow it to cool a little.
Spread it all into the base of the pie and then top with the chocolate chunk layer. Pinch/fold the edges together.
Bake at 190 C/375 F for 15 or so minutes. Keep an eye out on it though. Like cookies, the dough will become more solid upon cooling.
This will make more cookie dough than what you’ll need for a pie, but whatever you don’t use, tip into a freezer bag and use in future as an instant crumble topping for fruit. Or if you’ve got the energy, roll it out and use it to make cookies. 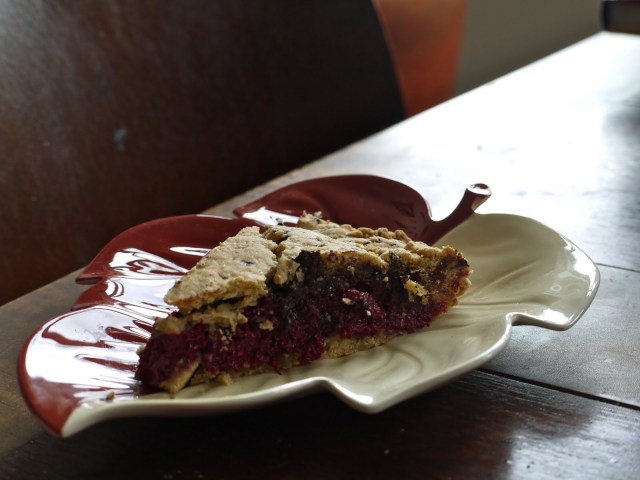 So what does it taste like? All the nicer for sitting on this brazenly pretty plate shaped like a leaf, I can tell you. (It’s from Vanishing Point at 40 Abel Smith Street and their stuff is very reasonably priced, considering this is Wellington.)
As I said, the hypothesis paid off and both the base and top were crisp and chewy and, well, cookie-ish, without the slightest hint of disintegrating into a pastry swamp from the berry juices. The cookie recipe’s a good one, so it wasn’t surprising that it tasted delicious, but the small bursts of very dark, velvety chocolate against the more sweet, fragrant filling was very delightful. The whole thing was pretty brilliant actually – richly berried, softly gritty and crimson of filling, sturdy and intermittently chocolately of exterior. 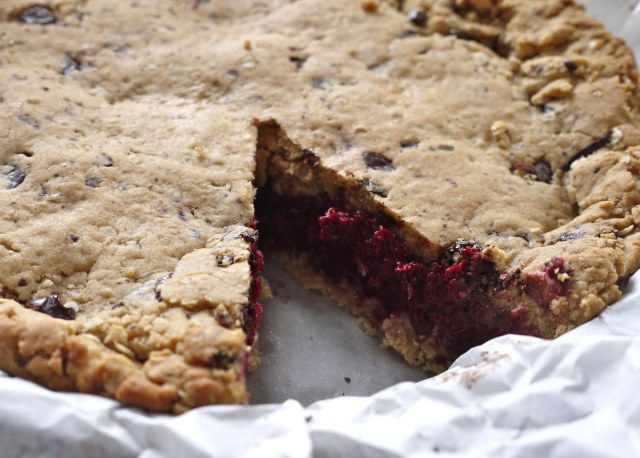 As far as endorsement that’s not from me goes, Tim and I cheerfully fed this pie today to a cool crowd: Kate, Jason, Jo (thanks for the flowers Jo) Kim, and Brendan (who doesn’t have anything to link to.) They all seemed to really like it, and not just because I was standing right there with a serrated knife. Also, it was ostensibly given in exchange for more Parks and Recreation from Kate and Jason (that kind of rhymes!) so it’s all nicely circular. Tim and I watched an episode while having dinner tonight, it’s actually concerning how hyped up we were. Mind you, we do this over a lot of TV, at least we’re both like this. (Tim: “Mmm, both of us”.)
It has been a good weekend: Yesterday I had the fortuitous opportunity to have lunch at Kayu Manis with the esteemed Chef Wan and several other local food bloggers (find out more and see the photos here) and on Friday night I had another very fun food blogger occasion in the form of a Wellington on a Plate dinner at Fratelli. Last night Tim and I went to see @Peace at Chow, which was a sort of awkward location, but it was a cool night. Well, a cool morning. It started after 1am. Hence these stilted and expressionless sentences. I felt things! I had emotions! I just had two really late nights in a row and am feeling increasingly useless at placing words in a row effectively as this evening wears on.
Luckily, this being 2011, my thoughts on this pie, and all other good things, can be summed up with one simple gif.
___________________________________________
Title via: The Kinks’ excellent, if lengthily titled Village Green Preservation Society, which now always makes me think of the good fight fought by the people of Otaua back in 2008.
___________________________________________
Music lately:
Scritti Politti, The Sweetest Girl. Some songs that you initially don’t think you like whatsoever and then end up listening to them on repeat many times over in one sitting? This one. Is one.
Have linked to it before but Disfunktional by the aforementioned @Peace is such a good song. Last night it was sent out to anyone fighting with their other half. Such is the fervour inspired in people by @Peace and its members, there was huge cheering from the audience, until they were told not to cheer because it’s not something to be proud of. I guess you had to be there, but it was pretty funny. Probably because I was standing near one especially enthusiastic guy. Who cheered at that point.
____________________________________________
Next time: Made a simple dinner of rice and peas tonight from the Lee Brothers’ book – might put that one up next. Doesn’t sound very fun, but it tasted just perfect.

18 thoughts on “we are the custard pie appreciation consortium”