I emerged from the weekend at home with my family looking like I’d got caught up in a knife fight. Luckily this wasn’t the case. It’s just that of the three things that bring Mum and Dad’s new kitten Poppy earthly joy, two of them are clawing and biting. The third is steadily ignoring the heavy disdain of the other cat Roger by chasing after him whenever possible.

So yeah, I’m pretty scraped up. I described Poppy on Twitter as being part Jessica Wakefield, part Bart Simpson, and part baby raptor, and I stand by it. Just when you think you need a tetanus shot and want to swear off small animals altogether, she’ll do something like this: 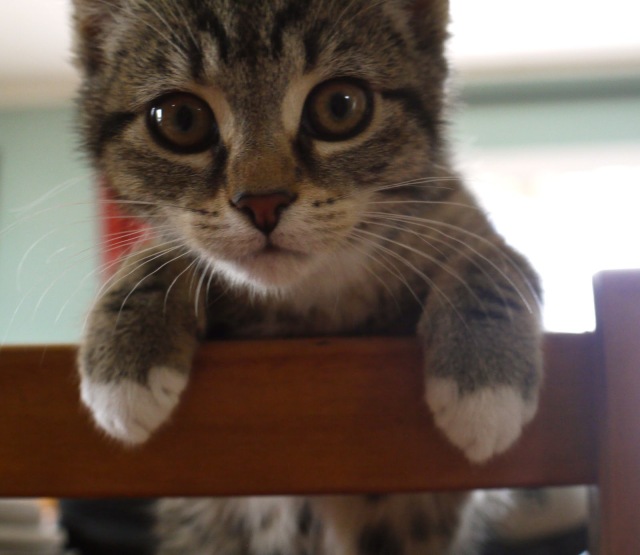 And then I forget what I was so mad about. The sting of her needle-claws fades away as I gaze into those inquisitive eyes.

It was hard to say goodbye to her, knowing I hardly ever get to go up home (you too, Mum and Dad) but on the other hand, there was Banana Pudding Ice Cream waiting in the freezer for me back in Wellington. The latest in a long, chilly line of ice cream recipes that I love, this takes a bit of work but is worth every single moment of your time, and rewards you tenfold with every spoonful. 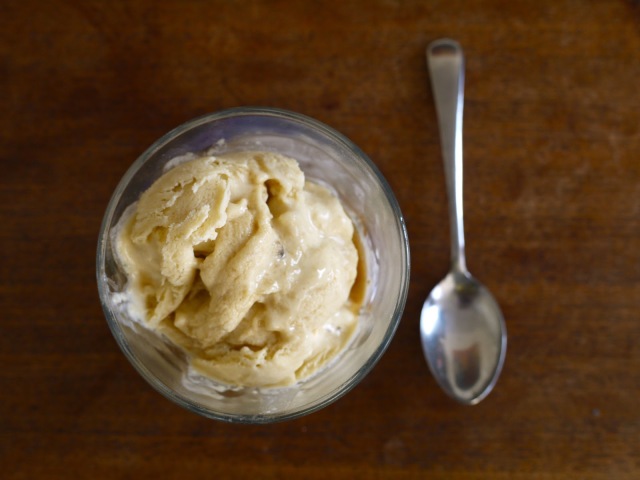 Before I get into the recipe though…As I make a lot of ice cream, I thought it’d be nice to mentally spatula my brain for a list of ideas and helpful thoughts in the hopes of converting you all into the level of ice cream love that I have. And if you have any of your own to add, feel free to do so in the comments section.

7 Habits of Highly Effective People Who Make Ice Cream (these aren’t even habits, but I don’t like the word ‘tips’ and “Ice Cream Policy and Guidelines” sounded way harsh.)

1) You don’t need an ice cream maker. That’s just what ice cream maker manufacturers want you to think. It would be really cool to have one, but really, just freeze the stuff in a container, stir it occasionally, and you’ll be sweet as.

2) You do still need equipment. A food processor is essential if you want to make Instant Berry Coconut Ice Cream, otherwise all you need to find is: an average wide saucepan, a spatula, a whisk, and some good-sized tupperware or empty takeaway containers.

3) Don’t feel held back by what you can or can’t eat. From cream and butter (see below) to the cleanest of vegan ice creams, there are so many options. Coconut milk or cream is an amazingly versatile substitute for cream, both on its own and in custard-based recipes. Unless you’re adding a pre-prepared ingredient (like a particular chocolate bar) all ice cream should be gluten-free. Check out my recipe index if you’re not convinced, as somehow most of my ice cream recipes have ended up being vegan or dairy-free.

4) Imagine all the ice creams. Once you’ve got a good ‘base’ vanilla ice cream recipe, you can stir any number of cool things into it to make a spectacular pudding for yourself or a crowd. For example: chopped up dark chocolate and/or fudge; walnuts toasted in a little butter and brown sugar; whole raspberries; bashed up chocolate chip cookies; a whole bag of smarties/m’n’ms; it goes on. Your four options in order of most to least easy are: a couple of cans of coconut milk mixed with sugar (for a vegan base); about 500mls/2 cups cream whipped softly with 1/2 cup icing sugar; egg yolks and sugar beaten together with whipped cream then folded in; and finally a full-on homemade custard, which you’ll see in the recipe below. If your own mind is fleeced, be inspired by other people – searching “ice cream” on Tastespotting would be a good start.

5) Keep stirring. If you’re making a custard based ice cream, it may feel like the mixture is taking forever to thicken but the moment you leave it to check Twitter/etc it’ll overheat and you’ll have weird scrambled eggs on your hands. A spatula ensures that all the mixture gets lifted off the wide surface area of the pan and moved around. This also applies to rule 4. Keep stirring…stuff into your ice cream.

6) Accept the differences. The texture of homemade ice cream isn’t going to be exactly the same as the stuff in two litre tubs from the supermarket. The main difference is it’ll likely freeze harder, meaning you just have to let it soften a little on the bench for 15 minutes before you serve it. But you’ll be able to control exactly what goes into yours – no emulsifiers or stabilisers or soya lecithin (what even), it’s very likely to be cheaper than bought stuff, and you can get as creative as you like with the flavouring.

7) Don’t be scared. There’s a lot involved in homemade custard – from separating the eggs to heating the cream to carefully and slowly cooking the two together. However. As long as you keep stirring with your spatula and have a low heat, you will be just fine. Nigella Lawson recommends having a sink filled with ice cold water to sit the pan in quickly if you get nervous, I’ve never had to do that but it might give you peace of mind. I cannot overstate how clumsy I am, and not once in my entire life have I screwed up ice cream. Neither will you. And if you do, just step back a bit and try the more simple methods first.

And then try this. Bananas aren’t my first choice of fruit but this recipe capitalises on all that they have to offer – the quick-to-caramelise sweetness, the creamy texture, and the light, almost lemony flavour. It is SO good.


From The Lee Brothers Southern Cookbook.


In a pan over medium heat, melt the butter till it’s frothy, and stir in the brown sugar. This will become a delicious, bubbling caramel in a minute or so, and at this point, stir in the banana and cook till softened. Pour over the rum, allowing it to sizzle and bubble away for a minute or so. Remove from the heat, and spatula everything into a food processor bowl.


In a bowl, beat the egg yolks lightly then add the 1/3 cup sugar. Continue beating til mixture is thick and light. In the same saucepan you cooked the bananas in, gently heat up the milk. Don’t let it boil, but let it get good and hot.


Remove the pan from the heat and take half a cup of milk from it, pouring it into the food processor with the bananas and blending the lot till very smooth.


Pour the rest of the milk carefully over the egg yolks, whisking while you do so. Now spatula all this back into the pan that the milk was just in, and heat very, very gently over a low heat, stirring all the time. It will take a while, but it’ll thicken up into a light custard. At this point, take it off the heat (still stirring) and tip in the contents of the food processor, mixing it all together. Refrigerate till cool. And try not to eat it all at this point, rummy banana custard on its own is extremely delicious.


Finally: whisk the cream till it’s nice and thick, fold it into the banana custard, tip the lot into a container and freeze, stirring occasionally. 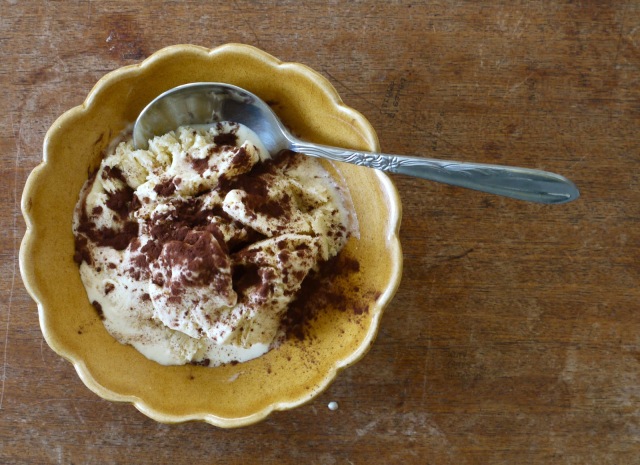 According to the Lee Brothers cookbook, banana pudding itself is a bit of a die-hard American thing, but for all that, it’s not necessarily particularly delicious. This ice cream is their take on it – for some reason I do love puddings that are variations on other puddings – and it’s luscious stuff. I really like that there aren’t huge quantities of everything, unlike other ice cream recipes which might ask you coolly for 9 egg yolks. The butter, brown sugar and rum elevate it above the ordinary, their dark caramel flavours not entirely muted by the freezing process. The result is a magnificently flavoured, velvet-textured, pale yellow ice cream. A very good idea would be to make a caramel sauce and add some of the rum in it, or even just do as we did and pile the ice cream into a glass and tip a capful of rum over the top. As you’ll see in a couple of the photos, I dusted it with cocoa – the bitter plain chocolatiness of which was an excellent match. 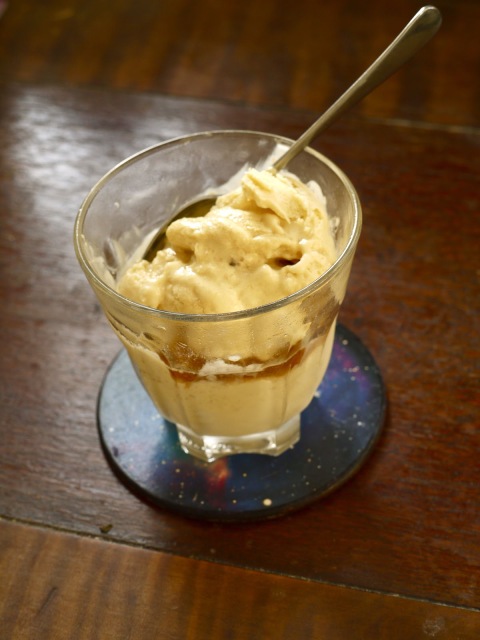 Here’s where I poured more rum over – the ice cream slowly and saucily melts into the alcohol. The spicy rum gives your mouth a hard-liquor kick which is then cooled by the ice cream. Meant to be.

As well as finally meeting the kitten over the weekend, Tim (who flew up to meet me) and I also caught up with heaps of my family and had a huge number of gifts pressed upon us – a jar of homemade lemon curd, a cake tin, socks, duck and hen eggs, bowls, and mugs. On Saturday night at my request Mum made corned beef, which she does with a level of amazingness I can only attempt to reach. I left feeling very happy and loved, and also nervous about the eggs, but miraculously they didn’t break on the journey back to Wellington. 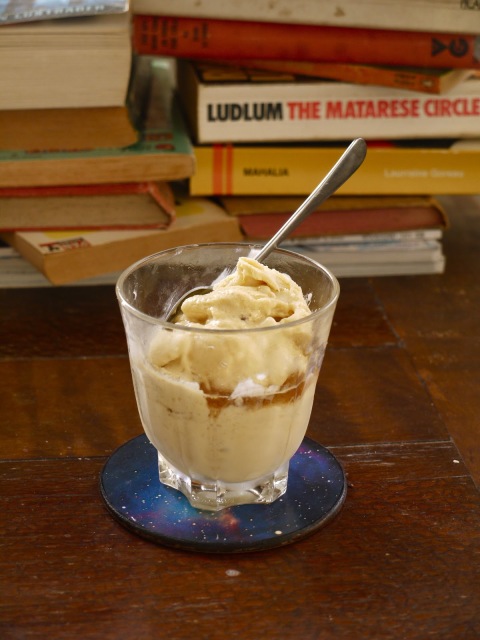 While endlessly gazing at Poppy I realised she was almost identical to the kitten in David Dallas’ very cool new video for Take A Picture (ka-chiiiik! Can’t help it.) The eye colour is a little different, but apart from that…totally twins.


Next time: Could be this delicious baked oatmeal recipe I found, or maybe this pea soup recipe which is basically just peas and water. It’s not only extremely financially friendly, it’s also surprisingly fantastic to eat, too.

15 thoughts on “i dug right down to the bottom of my soul, to see how an ice cream felt”