For all that I occasionally struggle to count to ten accurately (specifically, I lose count of things really quickly. I can count to ten. I can!) my brain does put itself to good use coming up with ideas. I was in the middle of implementing one pavlova idea that I’d thought up when my brain sidestepped and reached into a previously unused pocket and presented me with yet another cool idea for pavlova.

This is the first idea. I got to thinking that we humans cover pavlova with various fruits – and that’s all. There’s good reason for this – pavlova is tongue-dissolvingly sweet, and fruit provides contrast of both texture and relatively lower sugar content. But when thinking about things that aren’t fruit, I hypothesised that a pavlova covered in smarties (or m’n’ms or pebbles or whatever, but let’s stick with smarties while we’re here) would be dazzling to look at and delicious to eat – imagining crunch of candy-covered chocolate against marshmallowy, yielding pavlova. Thick cream in the middle to sandwich it all together. And all those rainbow colours against an off-white pavlova base.

My hypothesis may have been shaky and my mathematics half-hearted, but truly:

= oh my goshness unbelievable gasp flavoursome excellence jazzy rainbow candy wow (and also this whole time you were performing a gleeful can can without even realising it.) 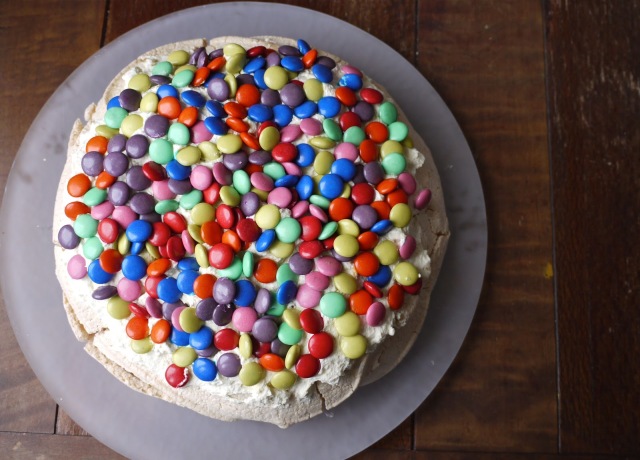 It actually tasted exactly like I imagined it would. Nice one, brain o’ mine! Now, don’t be fooled: this is sweet. But the crunchiness somehow counteracts the solid sugar hit. Apparently a glass of milk alongside is good. This is a highly decent fall-back pavlova recipe too, with only four egg whites and a straightforward, as far as these things go, method. The end result was almost weightless, large, and had a crisp, melt-in-mouth exterior encasing a soft interior. 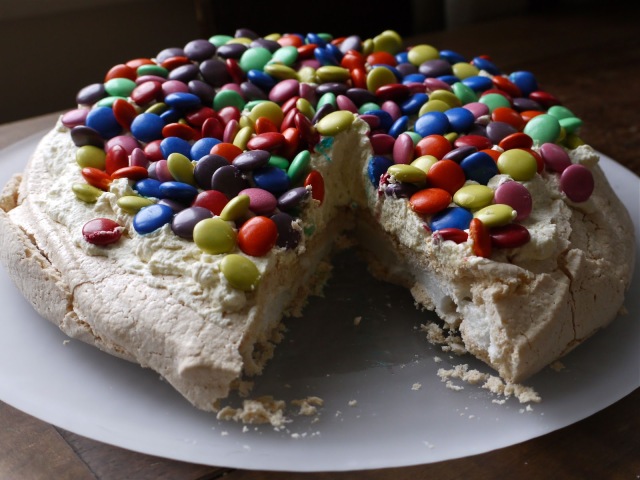 Smartie Pavlova
(or whatever you call the lollies) (and really, name it what you like, I’m not watching at your window like Kathy in Wuthering Heights to see what you call it. I can, however, be persuaded to dance like Kate Bush’s interpretation of her!)
Pavlova recipe itself from Nigella Lawson’s seminal text How To Eat.
4 egg whites
250g sugar (caster sugar if you can)
2 teaspoons cornflour
1 teaspoon vinegar – I used cider vinegar
300ml bottle of fresh cream
2 tablespoons brown sugar
Between 300g and 500g smarties/m’n’ms/pebbles/equivalent. I picked out all the brown and white ones and ate them because I wanted bright colours only.
Set your oven to 180 C/350 F. In a very clean non-plastic bowl, either whisk or beat with a mixer machine thing the egg whites till very frothy and quite stiff. In every other recipe in the world that I’ve seen, you’re supposed to add the sugar a tiny little bit at a time, but Nigella reckons to just add this quantity a third at a time. I nervously went with the incremental approach, but anyway, it’s going to get very, very thick and stunningly glossy. As you get on you can add the sugar in larger quantities.
Spread it on a paper-lined baking tray to a circle of around 22cm across, smoothing out the top as well as you can, then put in the oven and carefully shut the door. Immediately reduce the heat to 150 C/300 F and bake for between an hour, and an hour and a quarter. Allow to cool.
Whisk the cream and brown sugar until stiff and spreadable, but not so stiff that it’s getting granular and threatening to turn into butter. Spread it thickly across the top of your cooled pav, and then carefully topple over the smarties. Half of them will probably fall off, but just scoop them up and use them to fill in the gaps. Admire. 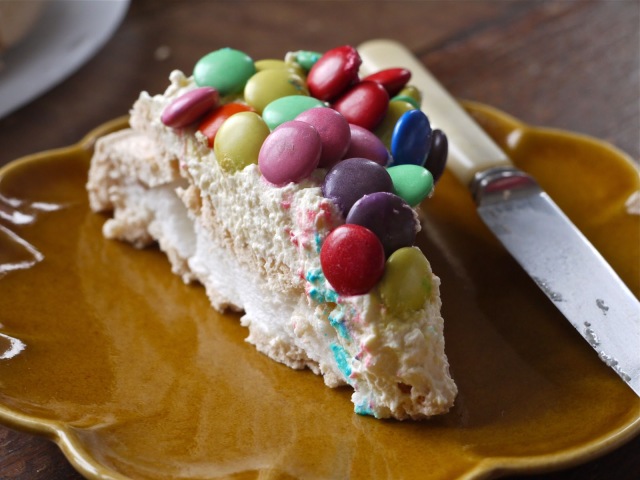 This pavlova was carefully ferried by myself to be sliced into by friends while watching the important modern drama Gossip Girl. As you can see in the above photo the colouring on the candy shells of the smarties bleeds out a little on the cream – this is no real biggie but if you’re planning on trying this, decorate it at the last minute. The actual pavlova itself should last for a good long time in an airtight container, but everything else, assemble as late in the piece as you can to keep it at its twinklingly polychromatic best. Don’t be afraid of how ridiculous this may seem to you: it’s delicious and it makes sense when you gaze upon it and when you bite into it.
Oh, and if you’re feeling only partially motivated to make pavlova, I’ve made another video to add to my collection of cooking tutorials this time with some fast tips and tricks on how to get your pavlova game on. I’m not sure how many tips there actually are, as you can see I lose count. But the price is right.
The pavlova that I’m making in the video, is the same pavlova that I’m talking about here. Synergy!
A few days after the last remaining slice of that pavlova disappeared, I met with the same group of friends at the same house, for a Halloween party. Neither Tim nor I had ever been to one before so we went all out, like Cady Heron in Mean Girls. None of this “I’m a mouse, duh!” here. I fulfilled a long-held desire to dress up as Elphaba/Wicked Witch of the West from Wicked (didn’t have time or a willing photographer to let me recreate every promotional photo since 2003, but maybe next Halloween) and it was so fun. That’s green eyeshadow all over my face, not facepaint – a little advice from me to you – and the hottest, itchiest, prone-to-moultingest $2 shop wig ever. A huge thanks to our amazing hostess Jo.

Yeah, I downloaded Instagram. I wasn’t glowing fuzzily like that in real life. It’s just so prevalent that I start to wonder if the events I’m snapping really happened if they don’t feature blown-out lighting or a rosy glow. And it makes my grainy phone photos look like they’re supposed to be that way.

Tim…well, I asked his permission to put a photo of him here, which may serve as some warning for what you’re about to see. So there’s the TV show Parks and Recreation, then there’s the mighty and wonderful character Ron Swanson, owner of glorious mustache, whittler of canoes, eater of bacon, resembler-er of cats. Until one episode where – spoilers! – things go wrong with an ex-wife he can’t quit, and he ends up in prison, with cornbraids, a chunk missing from his mustache, a satin bathrobe and dark shadows under his eyes. Tim went as that version of Ron Swanson, and I spent two hours braiding his hair into what you see below (photo by Jo):

I promise Tim’s fantastic-looking on non-Halloween days. Just type “Ron Swanson” into google images and you’ll see pretty fast the point of reference. This photo is one of my favourites – the ominous red-eye, the ominous reflection in the mirror, the ominous gleam in his satin bathrobe. Proud of my handiwork. And it was such a good night, culminating in some feverish dancing to Kate Bush’s Wuthering Heights (I told you I could be persuaded) and some very specific and still-memorised dance moves to the Spice Girls’ important song Wannabe.
_________________________________________________
Title via: Rainbow High from the musical Evita, which is such a gloriously stompy song and is best showcased by a much younger and giggly but still terrifyingly talented Patti LuPone, the original star on Broadway, performing it at Les Mouches nightclub.
_________________________________________________
Music lately:
Well, Spice Girls/Wannabe and Kate Bush/Wuthering Heights…of course.
Also the new video for David Dallas’ awesome song Start Looking Round is as good as you’d expect it to be, considering his recent output. Even with no kittens in it like the last one had.
_________________________________________________
Next time: On Saturday morning Tim and I met up with aforementioned Jo and also Kim in Petone and we kept running into each other and they gave me – well, Tim and I – parfait glasses! And now I want to make ice cream to put in the glasses. Because they are beautiful and I love them (the glasses AND the ladies.)
Oh yeah and the idea-within-an-idea for pavlova was, okay, imagine if instead of putting whipped cream on pavlovas, there was cream cheese icing instead? Maybe with caramel sauce on top or strawberries or who knows. Or imagine little tiny meringues sandwiched together with cream cheese. I just need a reason to try this, is all, so if someone has a need for an experimental pavlova in their life…

20 thoughts on “i need to be dazzling, i want to be rainbow high”