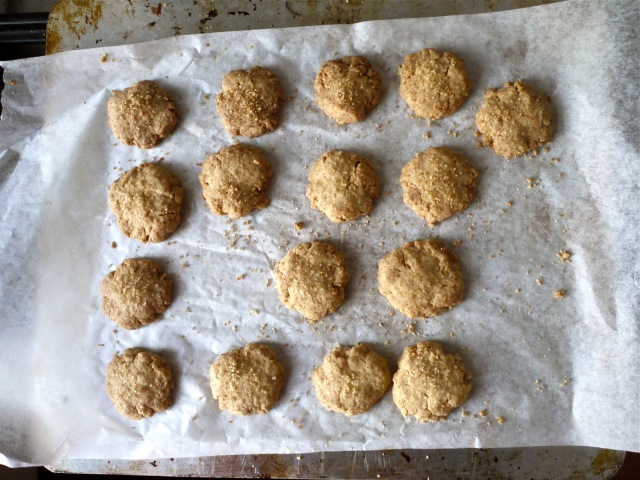 It has been a little while since my last post but I feel I had a distinctly good reason to leave you all dangling expectantly, like…no, can’t think of a not unsavoury simile to end that sentence with.

But if by any chance you hadn’t heard me talking about it constantly, I still have a book deal and I’m still going to be publishing a cookbook and I’m still overcome with happy excitement. I’m a person who’s quite used to disappointment from way back, you know, the picked-last-for-the-team kind of kid, so it’s wildly unusual to have this existence of having achieved exactly what I wanted. I mean I still have to write the thing and it has to actually be a success, but even so, just getting asked to do it makes me feel like that scene in Fame, where Doris is slowly eating her dinner in a deeply aware manner, after her drama teacher instructs the class to study every aspect of how they move through life. Here I am, walking down the street, as a soon-to-be-published author. Here I am, putting on a sock, as a soon-to-be-published author. It’s really something. In your face, people who picked me last! Actually I take that back, for two reasons: firstly it’s not all those many kids’ fault that the teachers continually enforced such an unjust, merciless system of group distribution; secondly I would’ve picked me last too. I was hopeless. I really was not the person you wanted on your longball team. D’you know what I’d pick me first at though? A damn book deal, that’s what. And all you teachers who, King Joffrey-like, cruelly asked the cool sporty kids to pick teams? The book-deal-people (yeah I still can’t tell you who it is yet) approached me. Out of the blue. I didn’t have to go to them. In your face, specific teachers who did that! (But please buy my book.)

Let’s leave the enforced ugliness of gym class behind us. There’s better things up ahead. And I would like to present a sincere, heartfelt, serious thank you for all the nice things everyone has said to me about all this, via tweet and email and blog comment Facebook message and full-body hug. You’re all good people, and I can’t wait to write this book. 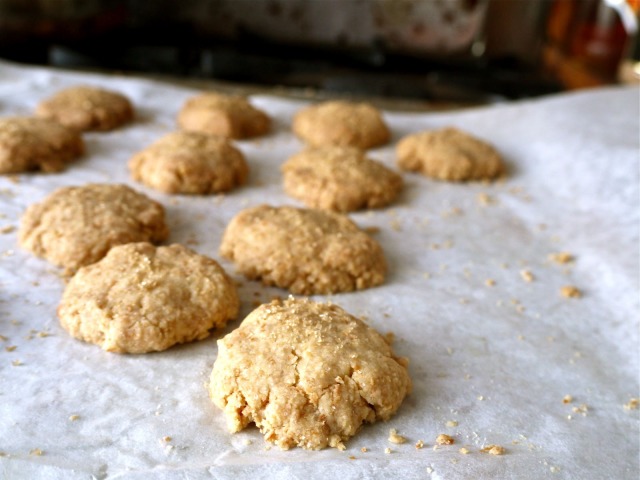 In the meantime, a gentle reminder that things will just refuse to fall into place more often than not, I invited my great friend Kate over to be on the next episode of my podcast. Because we fancy ourselves as fancy, I made these Fancy Tea Cookies from my Favourite Recipes of America: Desserts cookbook. We had us some crackling and sparkling dialogue for about 45 minutes, Kate left, I went to go edit the file to turn it into a podcast, and discovered that the recording had frozen up, ten seconds in. All of that for nothing, damn it.

Still at least they were good cookies. And completely…not fancy. But then the book was written in 1968, before the popularisation of, like, truffle oil.

Beat the butter and sugar together in a large bowl with a wooden spoon (or whatever) till well combined, creamy, and light-textured. Carefully stir in the flour and coconut. If the mixture feels particularly soft, refrigerate for 20 minutes, then roll spoonfuls in your hands and flatten carefully (the mixture is a little crumbly but it will stick together if you push it into place!) Place the cookies on trays lined with baking paper, sprinkle with the extra sugar, and bake for 25-30 minutes at 150 C. 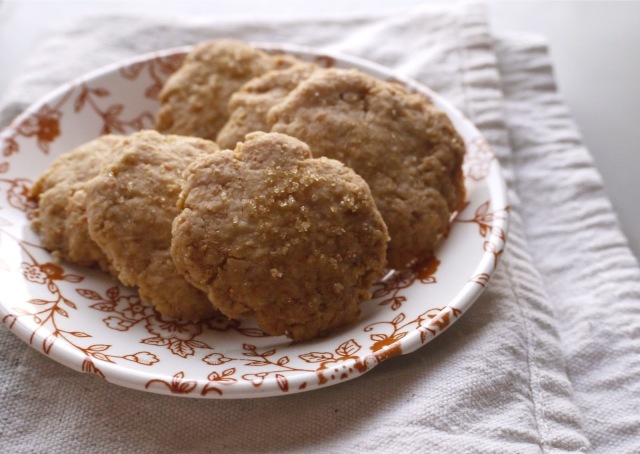 These don’t taste intensely of coconut, so if you wanted to you could ice them and sprinkle over even more coconut. They do have this densely buttery flavour and a wonderful shortbread-style texture, and even though they look sturdy they’re not even slightly crunchy, instead yielding – almost dissolving on the tongue – but not to overthink it, they’re just really nice cookies, okay? Okay. And as the name says, really good with a cup of tea. 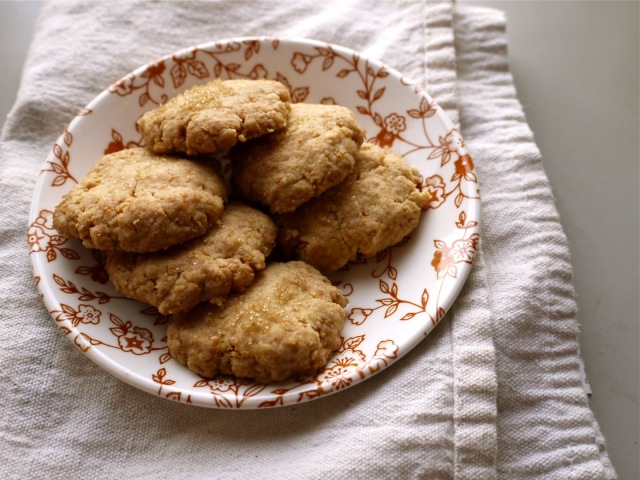 Some more good times have swung my way lately. Yesterday, the female-proud juggernaut that is BUST magazine graciously asked if they could please post the recipe to my Gin and Tonic Ice Cream. I said yes, of course. Then this morning I found out that the cool Jessica of Foxes shop was talking about me on her Oh My Blog segment on Charlotte Ryan’s enviably excellent Morning Glory radio show on 95bFM. I was totally unprepared for how many nice things they’d say about me, I blushed so hard my face nearly fell clean off. Maybe something else will happen tomorrow and make it a trifecta of glory? Even if not, those are some laurels to rest upon.

While it might look like I’m going to do nothing but talk about this book deal, I’ll try to stay chill and at least only bring it up when it’s relevant. (Which I’m afraid is a 24/7/365 kind of thing.) I also don’t have any more details about it to share with you but I definitely will reveal all as and when there’s anything revealable to reveal. In the meantime, thanks again for all your kindness, and…I really do recommend those cookies.

Title via: Fancy, a Reba McEntire song, and though I have much love for Reba’s eponymous sitcom, and respect for her music career, my favourite take on this cautionary tale is by Broadway star Julia Murney. She is incredible and could embiggen any old tune but this one suits her well, unfortunately the only version of it on YouTube isn’t the bestest quality but there is a shinier studio version on her CD I’m Not Waiting if you’re that keen to hear it.

Gina G, Just A Little Bit. I do think this is a really good song still, it has aged better than some songs from, say, 2003. But perhaps Gina’s distinct babeliness helps with that.

Savage Garden, I Want You. Let the record state that I am an absolute non-fan of Savage Garden. My dislike for them is immense. But I have an almost sick adoration of this song and I’ve come to terms with this, mostly by listening to this song about seventeen times in a row.

Just in case you were concerned you’d stumbled onto a blog from 1996, look at this recent song I love too! Azealia Banks, L8R. I love this woman but I’d warn you not to click through if you’re made nervous by swearwords and stuff.

Next time: Haven’t thought this through too much, as every time I go to think about something instead my brain says “book deal!”

18 thoughts on “here’s your one chance fancy, don’t let me down”