Aren’t hormones just the darnedest things? I was thinking about the Spice Girls the other day and started crying a little. While on a public street in Wellington, walking to work. I know, what is life. It was pretty innocuous – something along the lines of ‘they were so pretty but accessible and they really did seem like the best of friends” and then I just got a bit teary, out of nowhere. Last time I cried while thinking about the Spice Girls was back in 1998 when Geri Halliwell left and I couldn’t listen to Viva Forever without my heart crumbling like a Spice Girls-branded Chupa Chup under someone’s back molars.

That really has nothing to do with anything (apart from everything) but it was an anecdote too large for Twitter and too strange for Facebook, and an anecdote nonetheless. I don’t exist on this many online formats to not be able to share awkward public tearfulness at the hands of a largely non-credible 90s pop group somewhere.

It has been a week of big decisions. The biggest being that with this cookbook looming ever closer, I’m leaving my full-time job to devote myself to writing. Writing the book, writing this blog (I don’t want to ever be too busy for it) and hopefully doing some more freelance writing too, in order to keep myself and Tim in butter. It’s not something I’ve decided to do lightly – money doesn’t come from nothing, I’ve gained a lot of opportunities from my current workplace, and honestly it still feels so recently that KFC and several supermarkets never called me back. But the book needs to come first, and so the end of June will also be the end of my office life for a while. 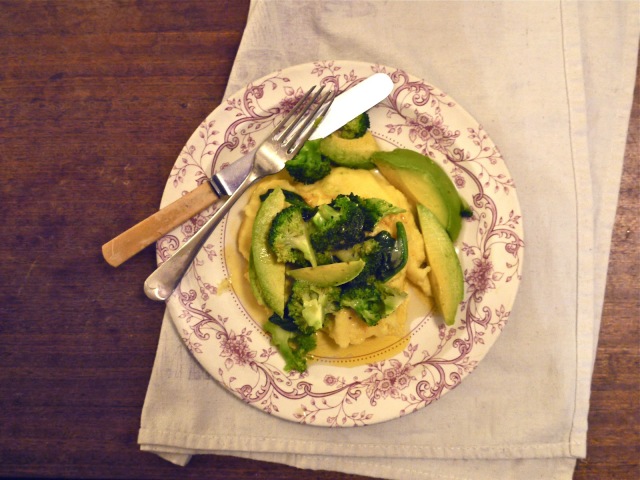 I almost wasn’t going to blog tonight – I did a lot of sleep-ignoring in the leadup to getting confirmation of the book deal and I can’t quite convince my body to carry on at that same hyper level now I’ve got it. However I conceded that I should blog, and could easily upload an instagram of dinner. Then I figured I might as well use my actual proper camera. By the time I started thinking “By gosh, this photo could use a loosely folded teatowel” I knew I was committed. This is just something I came up with tonight, a response to the brutally cold wet weather and to what I had in the fridge. I’m not the best at cooking polenta but this method, while not traditional, tends to work for me. Polenta will absorb pretty much whatever you throw at it, so if you don’t have cream, just use more water or milk and maybe add some butter, or you could use tomato juice, or well flavoured stock. There are options out there, this is but one.


A recipe by myself.


First, slice up any of your vegetables that need it and have them ready.


Then, in a medium sized pan, carefully whisk together the polenta, garlic, cream, milk and 1 cup of the water till smooth. Bring to the boil, continuing to stir, and adding the extra water if it gets too thick. It will bubble a little – big, slow-moving bubbles – but just continue to stir it, till, when you carefully taste it, the grains are soft and not the slightest bit gritty, with a texture verging on mashed potato-like.


Set aside while you quickly deal to the vegetables – heat up the pan and add any non-leafy, non-avocado greens to it. Tip in 1/2 cup of water and let it bubble away. Then add your spinach or other leaves, and continue to cook till the water has evaporated and the leaves have wilted.


Finally – spoon the polenta onto two plates, put the greens (including your avocado if you’ve got it) on top, and then finally heat up the same pan you cooked the veges in and throw in about 30g butter. Let it sizzle over a high heat till darkened, with golden bubbles appearing. Remove from heat and spoon it over the vegetables and polenta. Serve.

Polenta becomes quilt-soft and gently creamy in flavour – incredible comfort food, the likes of which I never even knew existed a few years back. Browning the butter means burning it, but if you’re wary of such brazen actions just know that it becomes more darkly rich and nutty and – oh, glorious new word! – pinguid than you dreamed possible. And hot browned butter on top of cool firm avocado is quite the revelation. It won’t be the last you’ll see this combination here, I assure you. 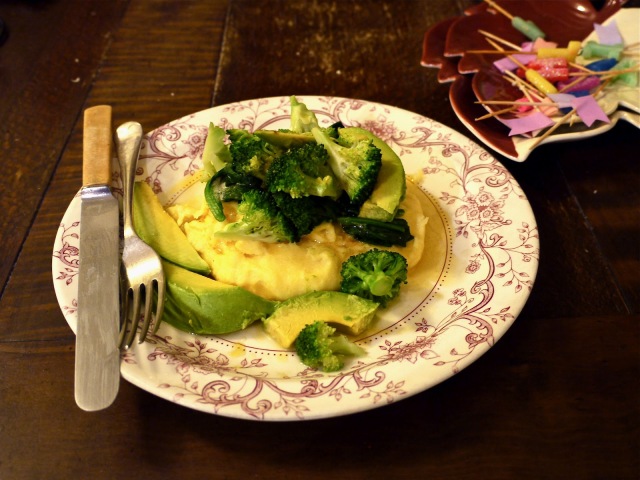 It has also been a week of podcast fraught-ness. If your original file never recorded properly, your laptop wall charger stopped working, you accidentally uploaded entirely the wrong file to iTunes and in a panic accidentally not only delete it entirely from your podcast website rather than calmly editing it, but also delete the first episode…would you feel like the universe was trying to say “stop trying to make fetch happen!“? It wasn’t just any wrong file I uploaded to iTunes, but a video. Yes, if you can’t tell by the crisp, stellar sound on my podcast, I just record myself talking on Photo Booth, then convert it to mp3, then upload it as a podcast. Except I forgot to convert it, so had you casually found my podcast on iTunes, you would’ve been greeted by my pale, unwashed face talking away in the semi-dark while I was wrapped in a wooly blanket, followed by me in an old tshirt with the angle of the camera directly up my nose, followed by me wearing the outfit I describe in the podcast, but still not at my best angle (I assume I have one.) iTunes does not make it easy for you to delete something in a hurry either. Awkward.

Again I’d like to throw some huge love in the direction of my friend Kate, who came and recorded twice after the first file was busted, whose husband volunteered me their own laptop wall charger after mine stopped working, and who is such a brilliant podcast guest that I was, while editing it, continually smiling and nodding and turning to Tim and yelling “I think it’s going to be good!” because I forgot that I always shout when I’m trying to talk with headphones on.

So if you want to listen to The HungryandFrozen #soimportant Podcast Episode 2, you finally can, on the website or here in iTunes. 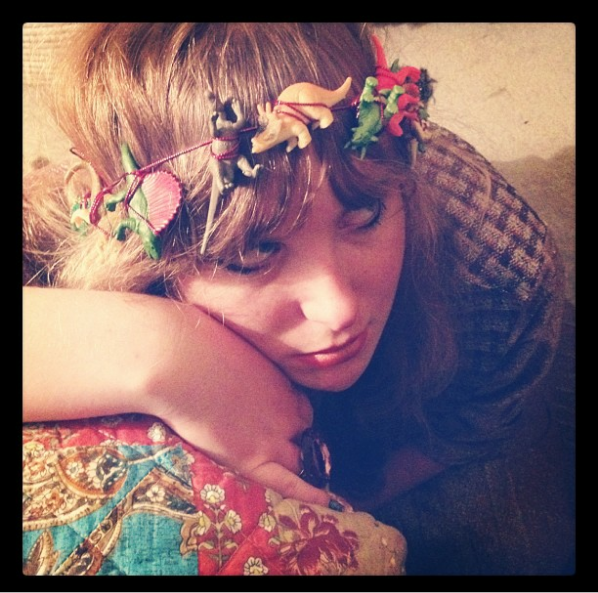