So much for my posturing about how unemployment would mean I’d be able to blog all super-regularly, because guess what? I’m still sick. After all this time. And I’ve been too sick to cook. If I don’t cook, I can’t blog. And if I can’t blog, do I exist? I’m kidding, sort of. But yeah. Sick sucks. My cookbook writing didn’t start with the leader-of-the-pack style motorbike revving that I anticipated, but with a more of a sniffle and a wheeze.

I’ve spent the past four days up home at my parents’ place – after a flight to Auckland where I was in such a hazy, groggy daze of weak hopelessness I was terrified that I was going to be pulled aside by security for suspicion of being on and/or carrying multitudes of drugs. I’m not sure ‘it’s just the cough syrup, honest’ or even ‘if I was, surely I’d be having fun than this’ is a defense they’d believe.

I had plans to test a ton of recipes for the cookbook while up home, of writing half the book, of doing a tour of royal proportions of my family in the area…but instead I just spent the whole time on the couch. It was kinda lovely though. Mum giving me old family cookware to use as props in the cookbook (and also to use in real life of course); Dad discussing asset sales with me; my younger brother making me never prouder by bringing up the Bechdel test out of nowhere while we were talking about movies. My nana surprising me by appearing in the car that picked me up from the airport, my godmother dropping in with a gift of lemons and chillis, my old babysitter who’s now a prison warden (no coincidence I’m sure) visiting after years and years away. And me on the couch, wrapped up in a feather duvet, in front of a constantly going fireplace. It was excellent.

I should also mention me discussing how much I loved the cats with the cats themselves. They were fairly impervious to my advancements. 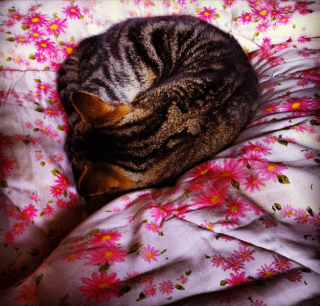 I was, however, rewarded with indescribable happiness when I woke up to find Poppy curled up on my bed. The former Jessica Wakefield/Baby Raptor kitten has mellowed into the softest, cutest cat. Also may I draw attention to the world’s most splendid bedspread? Instagram actually softens its effect somewhat, you really need to see it in person (not that that’s an invite) to appreciate its shiny, synthetic, unforgivably fluoro resplendence.

So I returned to Wellington yesterday afternoon, finally with a flicker of hunger to cook and eat again, which is good, because I have a million recipes to test. It was late afternoon and a snack was needed. Something simple. Something cheap. Something that would remind me that I actually like to cook and eat. Who do I turn to? Nigella of course, always. Nigella and her awesomely named Rainbow Room Carrot and Peanut Salad.

Depending on your tastebuds and their sense of style, this salad might sound weird. Like something that you might have made in the hopes of impressing someone in the late 1970s. Like there’s too much going on, like there’s not nearly enough going on. But it works – the different levels of crunchiness, the nutty sweetness, the salty, oily, sourness – all elements coming together to form something that you won’t be able to eat fast enough, I promise. I normally never peel my carrots by the way, but the ones I found in the fridge were a bit elderly and bendy…you know…so I made an exception. Kindly note the sunny yellow knife, a congratulatory present from Mum for getting the cookbook. And the tea towel came from her too. I told you I had a good time at home.

Grate or thinly slice the carrots. Mix with the peanuts. Mix in the vinegar and oil. There you have it.

This also works well with salted roasted cashews, if you’re not peanut-inclined. But there’s something in the carrots’ own nutty sweetness that goes so brilliantly here.

Will I ever tire of framing photos this way? Maybe not till those flowers wilt beyond recognition. And I’ve had them since before Christmas, so I don’t fancy your chances…

I admit, there was one evening in the last two weeks involving Soju and karaoke and red wine. But a dear, dear friend was moving to Japan, so what can you do? I’m pretty sure that the length of this sickness is not due to that one night. Maybe it threw my recovery off-course slightly, but nothing more than that. All I can say is, I’d better be better by the next time I blog here. I don’t want to be sick forever!

Title via: The White Stripes, that enigmatic duo with a permanent place in my heart, and Well It’s True That We Love One Another, the final track on their album Elephant.

Vulindlela, by Brenda Fassie. I don’t know what she’s singing, but it’s so full of joy and beauty that it doesn’t matter. I mean, I want to know, but this is enough for now.

Nothing like thinking of those worse off than yourself when you’re sick – Fantine’s big number I Dreamed A Dream from Les Mis made me feel positively healthy every time I listened to it. And anything’s more healthy than Patti LuPone’s wig here.