It’s funny, I grew up in a little village, and there was pretty much no shopping to speak of at our nearest town aside from groceries and takeaways and florists and such. And yet I have this very distinct memory of choosing which clip-on earrings to wear to go to the public library. Though I’m pretty sure I’ve always been quite cynical, bordering on snide, it also did not take much for me to get disproportionately excited (in fairness: the library was damn thrilling. A diary entry from 1996 marks the singularly bleak occasion where neither mum nor dad wanted to drive in that weekend and WHAT was I to do now?) But in terms of things that were genuinely exciting, every now and then Mum and I might go on a small spree, in the form of purchasing a Lindt Chocolate Ball each from – I can’t even remember which shop sold them, maybe the florist?
The mouthpleasingly spherical chocolates encase a softer, buttery chocolate filling which bursts in the mouth with pupil-dilating deliciousness. Unlike many a chocolate from my youth, Lindt Chocolates have held up quality-wise, and still have that special-occasion, grab-your-clip-on-earrings rush of joy. 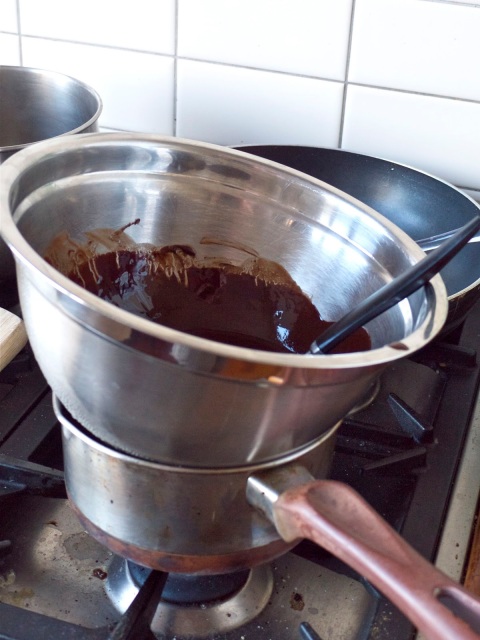 Which is why, when rereading Katrina Meynink’s delicious book Kitchen Coquette, I became a little fixated on her Lindt Chocolate Puddings, in which not one but two entire chocolate balls, frozen, are submerged in batter and briefly baked to produce a dark chocolate pudding with a slowly liquefying white chocolate Lindt centre. I rationalised hazily that buying a ten-pack of Lindt chocolate balls was better value than the three-pack; that I’d been doing some temping; that if I didn’t spend the money on the chocolates said money would only be sitting in my bank anyway, and that I’d really, really felt like pudding – one of those days, in fact, where you wake up and just know in your bones that you’ll need pudding later on.

That said, if you’re really fixing for this recipe but can’t physically bring yourself to fork out for Lindt – and I understand – pieces of decent white chocolate from a bar will still produce a damn excellent finished product, I’m sure.

Gold, since they cost as much as getting a gold tooth inserted into your mouth. Kidding! It’s more like the cost of a root canal procedure.
Seriously though, Katrina’s book is totally dreamburgers, and she’s a genuinely entertaining, evocative writer about food – not praise I really can say about all that many foodwriters. This recipe is but one of plenty recipes in Kitchen Coquette which will make you yearn to throw together ingredients immediately.

Place the chocolate balls in the freezer for at least an hour. When said hour is up, set the oven to 200 C and gather ye four 250ml ramekins.

Melt the chocolate and butter together gently, then allow it to cool a little and quickly stir in the eggs, sugar and flour. (This allows you to just use one bowl, but mix up the non-chocolate stuff separately if you wish.) Divide the mixture between the ramekins, and unwrap the frozen chocolates and push two into each ramekin, spooning over a little batter if they’re popping out the top. Bake for 15 minutes, till firm on top and bulging out the top. Don’t overcook – you want that saucy squish of barely-set cake batter.

And yeah, as I said, I’ve been doing some temping, the sheer exhausting nature of it being why it’s been so long between posts here. It was fairly…um. I won’t actually say what I did and how I felt about it or I’ll just end up sounding deeply unprofessional: the point is, I got paid, it was only a week, and I got paid. As well as that I’ve had a couple of interviews lined up for jobs I’ve applied for, which is quite cool right? My last interview that I had was back in 2006, for a clothing chain store – I didn’t get it – so going through the process again is nothing if not good practice. That said, Tim and I joked about having a bake sale today to boost our dwindling funds, and the joking turned kind of serious and strategic. I know I’m talking about a lack of money in the same breath as buying fancy-pants chocolate, but I’m not into policing how people spend their money, however limited, so…am hardly going to start on myself. And look at this pudding: what cost that happiness?

Two of my dearest friends are flying to Japan today – Kate and Kim, who both worked on my cookbook with me (stylist and photographer, respectively) and I’m incredibly happy and excited for them, especially having done a huge trip overseas myself, but Kate’s not coming back till the end of January, which is really a long, long time away from someone so wondrous. Sigh. All the sighs. Kim is returning back to NZ in two weeks’ time, like some kind of collateral or flat bond (but a million times nicer), so there’s that. I’m hopeless at articulating myself at the time of significant goodbyes – but with people that are such good friends I feel that you don’t have to make big speeches or anything, you just know. And also, fortunately there are still excellent and dear friends here still. It’s Kim and Kate’s time to shine, and I’m sure they’ll shine hard like the ethically-sourced diamonds they are. If you hear any strange noises at any stage though, it’s just me expressing my dramatic emotions via the application of a pillow to my tearducts. Totally cool. No big deal.

Elastica, Connection. I remember feeling, speaking of 1996 diary entries, such injustice that Justine Frischmann and Damon Albarn were going out. Because that, specifically, prevented him being my boyfriend. Still sorta wish he was, still adore this song.

13 thoughts on “but guess who is gonna be dessert”