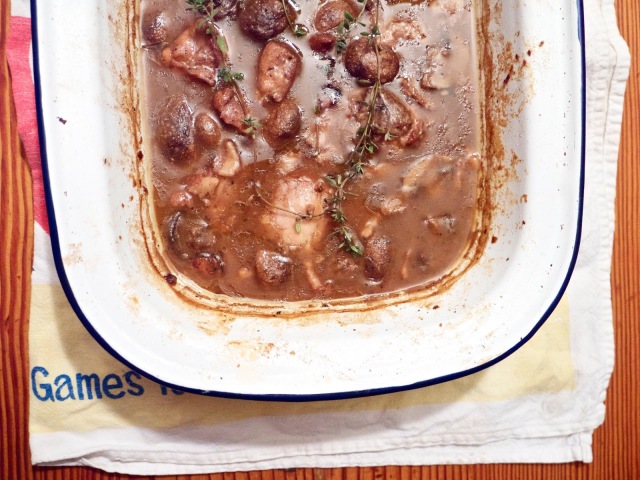 I’ve said before that I obstinately love winter. But I feel that above all, what really connects me to the nose-freezingly, spine-snappingly cold weather more than soft knee socks and duvets and watching dramatic, critically-acclaimed TV shows, and sitting by the heater, is the long and slow cooking of food. Casseroles, soups, stews, they’re the kind of thing that make me feel uncomfortably sweaty to consider in summer. But come winter, by putting some time into making meat fall from bones or dried beans swell and tenderise or, I don’t know, for other stuff to gradually turn into other stuff, I really feel at one with it all, like this is what I’m supposed to be eating and doing with my time. Despite these recipes usually being quite straightforward, making a casserole or soup from scratch over a matter of hours can feel like one hell of an achievement, and is the kind of food I can only properly enjoy this time of year.

The French, I posit sweepingly, know a thing or two about slow-cooked food. Coq au vin – which basically means chicken a la lots of wine – is excellently fancy but very old-world and rustic at the same time, and really quite easy. Or at least it is when I make it, more an homage than a strictly traditional method.

This recipe comes by way of Nigella Lawson’s important book How to Eat. Speaking of important…and a slight trigger warning here…I went back and forth and wrote and deleted things about what has happened to Nigella Lawson recently. I don’t want to write clumsily about domestic violence, but I don’t want to take her recipe then skate over other things brightly, politely. Much as I adore Nigella from afar, I don’t know her. But I do know that what happened to her, what happens to so many people, is not right. If you don’t know what I’m talking about, google carefully. If you’re about to pick up a newspaper or magazine that looks even vaguely victim-blaming or rationalising of this, or any similar story…maybe take that money and donate it to your local women’s refuge instead.

So. Nigella already went and made an easy recipe for this, adorably calling it half-coq au vin. Then I went and made hers even easier, lazy creature that I am.  I suppose I could call it quarter-coq, but I think it’s more like two-thirds-coq. Wait, but that’s more than half, right? Ugh, maths! I didn’t quit it in sixth form for nothing, so let’s just get back to the food. You still end up with this intensely savoury, rich, meaty stew with plenty of wine-heavy sauce for spooning over rice or mashed potato, dissolvingly tender chicken thighs, salty bacon, and densely earthy mushrooms. Fry it up, shunt it in the oven, and some time later you have dinner so comforting you could just cry, except there’s already enough sodium in there to crystallise all the cartilage in your body, and it probably doesn’t need any more. I say this as someone who loves sodium…and doesn’t really know much of anything about cartilage. Except that it’s creepily fascinating. I’m talking about sharks, yo. Deep-sea creature made entirely of cartilage. Nope, okay, definitely back to the food now.

Note: you could happily, depending on the size of your oven dish, double or triple this and then freeze portions for future good times. Also, there are supposed to be baby onions in this, but I forgot to buy some. Then I figured lots of people are allergic to onions, and I could just tell myself I was one of those people on this day. Note: you can also use 500ml red wine instead of half wine half water.

Adapted from Nigella Lawson’s seminal text How To Eat

250ml red wine
250ml water
a sprig of thyme
2 garlic cloves
75-100g (I kind of grabbed a handful, but my hands are tiny) streaky bacon rashers
6 chicken thighs, boneless and skinless. Although skinless is the bit that matters really.
1 heaped tablespoon flour
12 or so button mushrooms

Set your oven to 150 C/300 F. I used the enamel dish above, which can go on the stovetop and then into the oven. It’s joyous! But if you don’t have one, just cook everything in a pot and then transfer it to an oven dish before baking. OR you can simmer it in the pot slowly, but I think the oven does a better job of taking care of it – no need to stand around nervously hoping it won’t boil over or get burnt.

In a small pot, bring the wine and water to the boil with the garlic cloves and thyme floating around in it, then continue to let it bubble away till it looks like it’s reduced by about half. Fish out the garlic and thyme, throwing away or eating curiously, and remove the wine from the heat.

Meanwhile, roughly dice the bacon and fry it in your dish or pot till lightly browned and sizzling. Push the bacon to the side slightly with your wooden spoon or chosen implement, and place the chicken thighs in, allowing them to really sit there and brown on one side. It’ll take a while, but it will happen. Halve or quarter, depending on size, your button mushrooms and tumble them in once the chicken’s browned. Finally, stir in the flour – it will turn all rough and sticky at this point – allowing it to fry a little, then tip in the wine mixture and another 250ml water. Cover the oven dish firmly with tinfoil and place in the oven for 1 1/2 hours. Uncover and serve, as you wish. 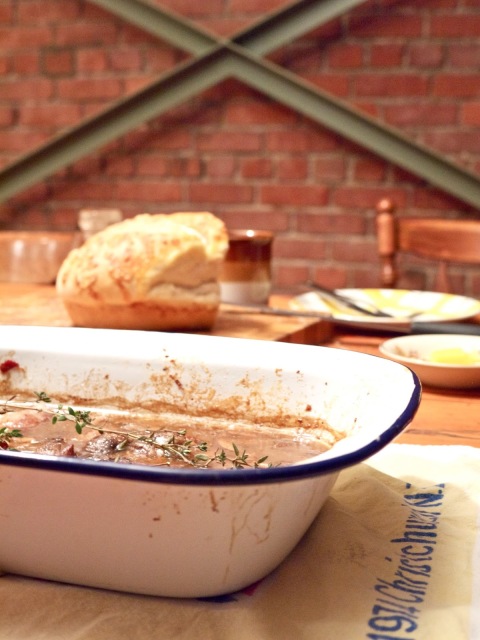 I had the grand idea that, there being six thighs, and this being two-meat levels of extravagant, this could provide dinner for Tim and I on night one, and then lunch for us on day two and three. But then two of the thighs thwarted me by simply falling to small pieces in the sauce. Damn thwarting thighs! But still, two perfect meals out of this is not bad. While we enjoyed it served over rice, I get the feeling it would be sublimely good stirred into pappardelle pasta with some cream. Or spooned over creamy soft polenta. Or served with really crisp fries to dip into the gravy. This is just such superlative stuff.

The thyme really does make a difference, flavour-wise (okay, I will make a laboured joke about time making the difference here) but I don’t recommend fronds of it as a garnish like I did here. It got all tangled up sinisterly in the spoon every time I went in for more, like seaweed lazily but determinedly knotting itself round your ankles.

After an idyllically mellow weekend – Friday night drinks and living room dancing, Saturday brunch and knitting and the truly bizarre Mad Max 3, and Sunday morning coffee, afternoon scrambled eggs, and lounging with Luther and West Wing – this half-coq au vin was an wonderfully slow, methodical way to end the week. And after a fairly stupid Monday morning of forgotten things and spilled, badly-made coffee and bitten hangnails, it made for a wondrous lunch reheated in the microwave at work.

Finally – if you like, but especially if you don’t like, you should definitely read my contribution to new site First Comes Love about my top five wedding locations, and my guest post for Holland Road Yarn about being a new knitter. What can I say, it’s a good time to ask me to talk to you about stuff!

Miley Cyrus, We Can’t Stop. Amazingly catchy-fuzzy pop. I do think it’s worth reading and acknowledging what Wilbert Cooper has written about this video also.

7 thoughts on “excuse my french but i’m in france”