I started writing this trying to compare my approach to food with Alice in Wonderland’s love of pretending and supposing and imagining and the comparison didn’t quite fit and so I deleted it and started again and deleted it and started again, along the way learning a valuable lesson: I subconsciously just wanted to show that I could use the word “adumbrated” confidently in a sentence (as in, I was going to say that I had adumbrated Alice’s words since I couldn’t remember where I had actually packed my copies of the books in order to quote them directly.) Long story short, I am pretty annoying and I have lots of ideas about food.

Long hair short: this also happened. I may be pretty annoying, but am also pretty, comma, annoying.
My hair has never been shorter than shoulder length, and even that was only once. Many years ago. So: the smaller the hair, the bigger the deal, really. And I like it! It was terrifying having it happen, especially when it was really only spurred on by a vague sense of needing a change and also one time I tied my hair into a low bun and thought I looked alright without much hair going on, but I remain all or nothing and so was not going to settle for a mere bob or even an aggressive trim. I’m very happy with the results. It’s a whole new Laura! I now have so many new looks! Like “meanest girl in the 1960s boarding school” and “girl in a 1990 edition of Dolly having the time of her life” and “trying very hard to look like Edie Sedgewick” and “Justin Bieber”. In case you’re wondering, yes, I did keep the ponytail. I plan to plant it under a tree which I imagine will quickly flourish and bloom and grant wishes to passers-by who are true of heart.

So yes, this salad came about because of an Alice-esque flight of fancy of mine – supposing there was a salad that was mostly made up of the sort of things that normally garnish a salad? As opposed to stupid vegetables? Lettuce leaves and cherry tomatoes were thus combined with the following good things: very buttery croutons, homemade basil almond pesto, fried sage leaves, toasted pumpkin seeds, crumbled feta, and pea shoots. I would’ve added avocado but none were ripe, but just know that it is supposed to be there also. I mean, this is essentially just “a salad”, really, but it’s fun to think of it as being comprised almost entirely of garnishes. So that’s how I’m going to pretend it is. 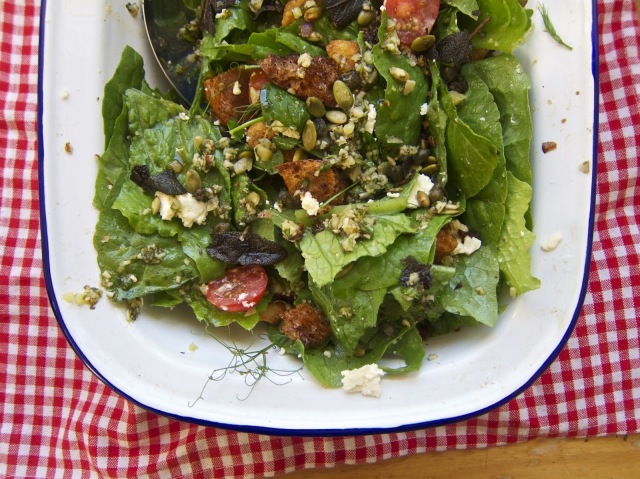 I know this is the same dish I used in the photographs for the last blog post, I understand if you never want to read this blog ever again now.

garnish salad
a recipe by myself. Serves two with seconds, or four one time.
one or two heads cos lettuce, roughly torn
a handful of cherry tomatoes, halved (sorry to be a monster, but they do go further this way)
a third of a cup of pumpkin seeds
three pieces of slightly old white bread
lots of butter
a cup of fresh basil leaves
half a cup of sliced almonds
about 25g parmesan cheese
olive oil
a handful of sage leaves
about 50g feta
a handful of pea shoots
Make the croutons first, and while they’re cooking, get onto the pesto. Tear the bread into chunks around an inch wide, although it really doesn’t matter. Throw them into a baking dish with about 25g butter (or more) diced and dotted over the top, and bake at 160 C till browned and crisp.
Meanwhile, using a large knife, roughly chop the basil, almonds, and parmesan till it forms a herbaciously fragrant rubble. Transfer all this into a bowl and stir in enough olive oil to make it a kind of pesto-resembling paste. Set aside. Melt a knob of butter in a heavy frying pan, and once it’s sizzling, throw in the sage leaves, removing and setting aside once they’re darkened and crisp. Finally, in the same pan, toast the pumpkin seeds until lightly browned.
Now: put your lettuce leaves, croutons, most of the pesto, the feta, oh my gosh literally everything okay just put it all in a salad bowl and stir carefully so that it’s mixed together but not flung out of the bowl. Add a little extra olive oil to what remains of the bowl of pesto and spoon it over the top, and then serve.

we’ve curated the finest artisinal garnishes, just for you
It’s easy to make fun of salad, especially since the Simpsons gave us the truism that you don’t win friends with it, but when it’s as aggressively loaded up with as many good things as this it would be silly to deny its complete and utter deliciousness. Crunchy seeds and nuts, marvelous cheese and other cheese, sweet bursts of cherry tomato and dissolvingly buttery sage leaves. The lettuce has its place too, much as I’d happily eat a bowl of croutons on their own the fresh crispness of it helps bolster everything else and bring it all together. This is one of those things where you could make changes depending on what you have to hand or can find – use sunflower seeds instead of pumpkin, use walnuts instead of almonds (or use actual pine nuts but they’re monstrously expensive), use parsley instead of basil, increase or ignore quantities that sort of thing. Salad! It’s SO good. Or at least, this one is.
So, I made another episode of Bedtime with Hungryandfrozen! This time about my love of grapefruit popsicles. I also obviously but totally recommend the first two videos, about cornflakes with chocolate milk and steak, respectively. I do get a little stressed about like, good grief, what am I doing with my life, shouldn’t I be doing something super successful in the field of being seen to be talking about food in a media capacity and instead I’m in bed making grainy videos about cornflakes, but…they are pretty fun.
______________________________________________________________
title from: Linda Ronstadts’ sad, sweet cover of Just Like Tom Thumb’s Blues. Leaves, lettuce leaves, yeah? My blog, my puns, okay!
______________________________________________________________
music lately
Zara McFarlane, Police and Thieves. Dad emailed me a link to this saying it was very cool: his opinion was correct. A little jazzy and a lot gorgeous.
Fiona Apple, Across the Universe. So, so dreamy.
Taylor Swift, Blank Space. Far out I love this song. The way she says “they’ll tell you Iiii’m insane” is so great.
______________________________________________________________
Next time: I haven’t done any baking in a while and every time I have it has sort of screwed up in some way – fallen apart, overcooked, that kind of thing. So, I wanna counteract that by being brilliant. If that works, you’ll see it here first.