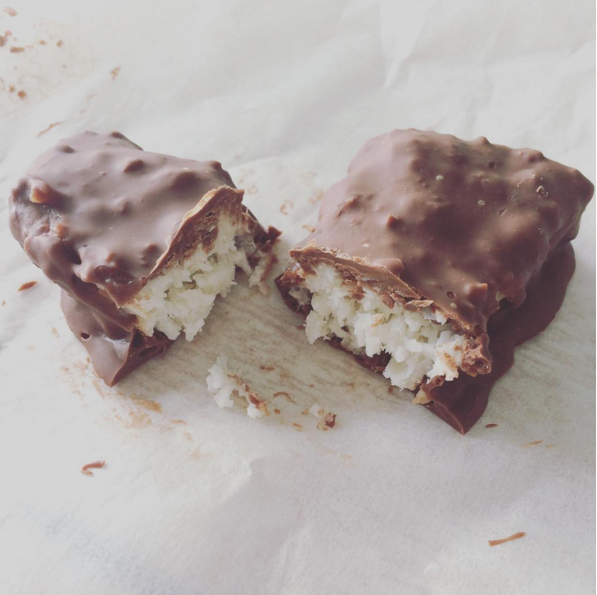 mutiny on the bounty

I, like Homer Simpson, am the highly suggestible type. If you need someone to rob a bank with you, just ask me: not because I am particularly stealthy (although I can do the splits with ease which I imagine would be useful for getting around laser light security) or inclined towards a sexy danger crime life, but simply because I’ll probably be like “ummm yeah why not, I haven’t got much on tonight” without even thinking about it too deeply. Indeed, the other day when my friend Jen was all, “My kingdom for a bounty bar!” I was all, “you know what? My kingdom, also, for a bounty bar!” And then I thought it would be way more fun to go to great effort to make my own, rather than just walking 200 metres to the dairy to retrieve one in a matter of moments. Jen is also currently crashing at mine, which means I was able to get both of us bounty bars while neatly using only one kingdom as bait. Or…something. 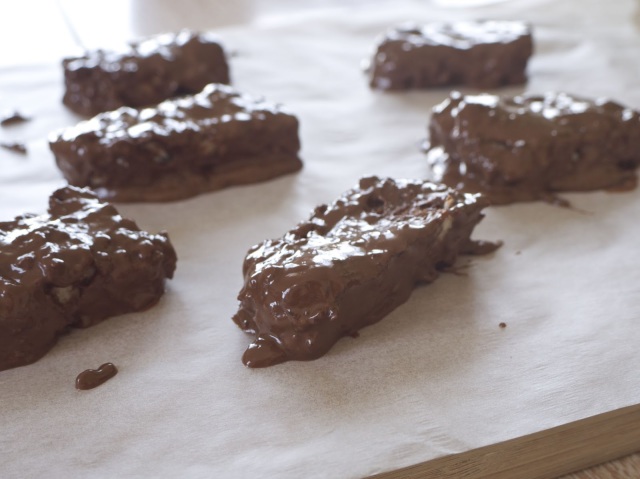 These are, charmingly, entirely vegan and really pretty cheap to make, although I confess I am a milk chocolate-adoring heathen and so used that to coat them, but all you have to do to keep them vegan is use a dark chocolate like Whittakers which has no milk solids in it. I found this recipe online and basically didn’t change a thing; but it’s worth keeping in mind that chocolate-dipping stuff uses sooooo much chocolate.

It might seem like far too much trouble to go to for a mere chocolate bar dupe, but there is a significant motivating factor: these taste so, so, so incredible. The coconut is all damp and squishy (there’s no better way to describe it sorry) and the feeling of the firm crunch of chocolate giving way to it all is straight up heavenly. I truly don’t want to be one of those people who are all “it’s practically health food!” because that kind of talk makes my teeth feel like I’ve just bitten into tinfoil, however, as these are blessed with twelve hundred different types of coconut by-product, you take one bite and you can practically feel your hair getting shinier.

from a recipe on healthyeah.co.nz (which is a v cool site!)

Put the coconut cream, coconut oil, and golden syrup into a small pan and heat gently, just till the oil is melted fully. Stir in the salt and coconut and remove from the heat. Spatula into a baking-paper lined brownie tin (y’know, one of those regular sized rectangular baking tins) and refrigerate the mixture till it’s firm. Then slice into even rectangles or squares and freeze (or if your freezer is tiny like mine and won’t fit a damn thing in it, just put it back in the fridge and hope for the best.)

Once you’re quite convinced that the mixture is as solid as it’s gonna get, gently melt the chocolate in a small pan, and carefully dip each coconut block into it, coating it on all sides, before resting it on a fresh sheet of baking paper to harden. Unfortunately the best way I can think of to do this is to literally sit each slice of coconut stuff in the chocolate and spoon more chocolate over the top, but you do you. Transfer the slices to the fridge once they’re all coated. It’s probably easier to melt the chocolate in two separate batches, just to prevent it burning while it melts.

So very worth the effort. Honestly, can not emphasise hard enough how good the bit is when you bite through the hard chocolate into the soft coconut.

Literally nothing of significance has happened in my life since my last blog post since all I’ve been doing is apartment-hunting and taking the distressing heat of summer very personally. I mean, I do love summer! I do not, however, love being all “why is someone pouring water down the back of my neck how rude oh my god it is my own sweat, how vulgar and embarrassing…better tweet about it.” But seriously, it’s so, so hot. Sweaty is my one personality trait. Wait, there’s a back-up personality trait: joy at having eaten a good 75% of this bounty of fake bounty bars that I made, while gaining mountains of praise for the mere 25% that other people managed to get their hands on.

Eliot Sumner, After Dark. Am 100000% in love with Sumner (fun fact: child of Sting and Trudi Styler!) and their music.

CHVRCHES, Lies. It’s so fizzy and atmospheric and the beat is addictive and I’m soooo bummed that I couldn’t go see them at Laneway on Monday.

next time: let’s all keep our fingers crossed that it’s some kind of cleaning-out-the-pantry type activity on account of I’ve finally found an apartment and need to, like, clean out my pantry.

6 thoughts on “you were rubbing both my hands, chewing on a candy bar”