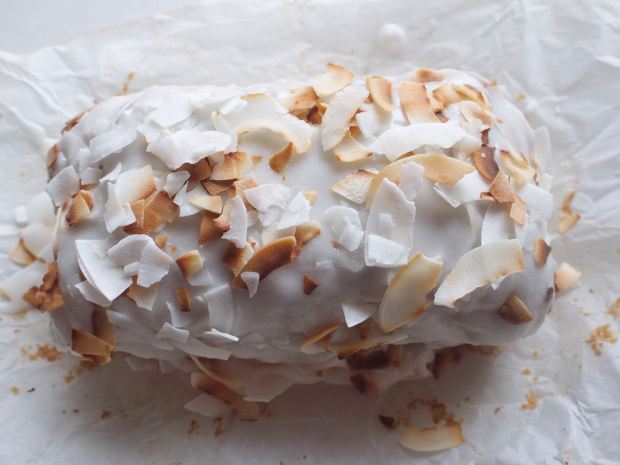 “Is that coconut I taste in this food you’ve cooked?” Yes, probably, I’m vegan. With this loaf cake I decided to take the obvious and go large with it – you’re definitely supposed to taste the coconut. In fact, it started off in my head as just a coconut loaf – admittedly, I was thinking about how cute the toasted coconut chips would look against the white icing more than anything else, but in my defence these days you have to be aesthetic-forwards or no one will grant you their precious attention span on the timeline, let alone care how passionately you write. And a coconut loaf cake on its own would’ve been great, but there was pineapple juice in the fridge leftover from another recipe, and I have a lot of rum in my wardrobe (as in, that’s where I have space to store it, Wardrobe-Rum isn’t a weird bartender quirk, it doesn’t enhance the flavour or anything.)

And who is better friends with coconut than pineapple and rum? I mean, to answer that question honestly as a vegan, I’d say there’s not much that I can’t make play nicely with coconut, but in a traditional sense, rum-coconut-pineapple is a classic, an iconic marriage of sweet and rich and zingy. My piña colada loaf cake recipe celebrates this magnificent trifecta – with an added friendly dash of lime – in an easy, one-bowl affair, which is chill enough to eat in the morning, yet elegant enough to eat at night. 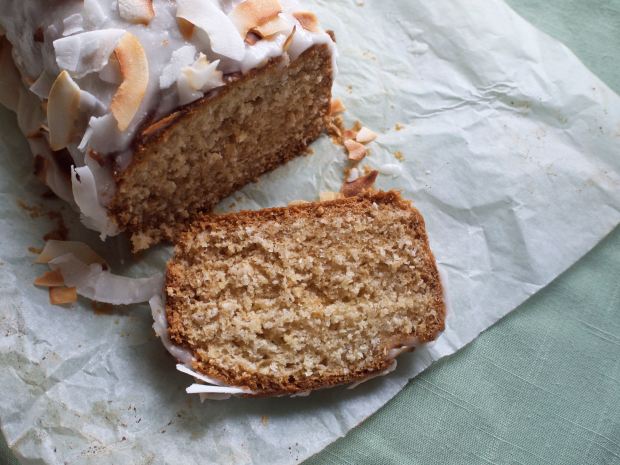 That SPF 50 flavour comes from using three different kinds of coconut – the sandy desiccated stuff in the cake batter, coconut cream in the batter and icing, and a generous handful of coconut chips on top. The rum is optional – but it makes things taste like rum, which is undeniably positive – and the pineapple, one of the most hardworking flavours there is, gives us juicy sourness, golden sweetness and a certain beachy hopefulness. The thing is, a piña colada wouldn’t really be my first, second or third choice of drink (and I’m so glad I retired my practice of naming blog posts for corresponding song lyrics so I don’t have to acknowledge that song) but in loaf cake form, it’s sublime. Is that coconut you taste? Hell yes. 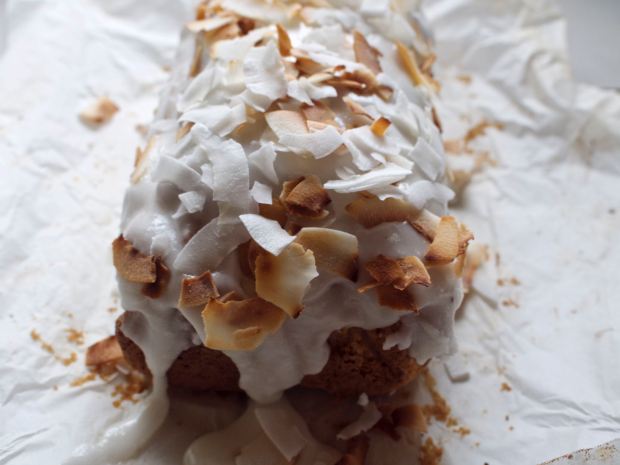 One-bowl, pineapple-coconut-rum magic. Recipe by myself.

1: Set your oven to 180C/350F and line a loaf tin with baking paper. Stir the flour, baking powder, baking soda and desiccated coconut together in a mixing bowl.

2: Make a well in the centre of the dry ingredients and tip in the pineapple juice, coconut cream, oil, lemon juice, vanilla and salt. Fold it together till it forms a thick batter. Spatula this mixture into the loaf tin and spread it evenly. Bake for 45-50 minutes, or until a skewer inserted into the cake comes out clean. If it looks like it’s getting too brown on top, cover it with a sheet of tinfoil.

3: To make the icing, mix together the rum, coconut cream, pineapple juice and icing sugar. Toast the coconut chips (I did half and left half raw) over a low heat in a frying pan till they’re just browned, and quickly remove from the heat.

6: Let the cake cool somewhat before icing – it can still be a little warm, but if it’s too hot the icing will slide right off. Spread the icing thickly over the top and then sprinkle with the coconut chips.

Store in an airtight container.

Notes: If your coconut cream is the kind that separates itself out in the can, make sure it’s the thick, creamy stuff that you’re using, and not the more watery part. For added flavour, you can jab the cooked loaf cake with a skewer in several places while it’s still hot and pour over a tablespoon or so of either rum or pineapple juice.

Song For The Sun by Swans. Yes, I like their more difficult stuff, but sometimes it’s nice to reward yourself with a straightforwardly wonderful song like this, and even if the melody is fantastically uplifting, the poetically miserable lyrics are there to grab you by the ankle and make you fall to the floor.

Dashti by Hayedeh. That contralto!

Ever New by Beverly Glenn-Copeland. Simply one of the most gloriously beautiful songs I’ve ever heard, I urge you to listen to it! For your health! Prioritise your health and listen to this song!

Next time: something savoury.