A lot to unpack here – despite the title of this recipe there is demonstrably neither macaroni nor cheese involved, and as for the wayward cross-cultural Thai-Italian fusion, perhaps the less said the better. But this is a food blog, so unfortunately for us all, I legally have to say more.

That being said – because we’re sliding headfirst into Christmas and because I am significantly sucrose-dizzy from eating large amounts of the mixture while making my Christmas Cake and Raspberry Rainbow Slab before settling down to write this – I will keep to the point: this is perhaps the best mac and cheese I’ve ever made. I’ve had numerous stabs at making THE vegan mac and cheese and they’ve all been great – usually involving cashews and pureed roasted carrots and nutritional yeast – and they’re still excellent recipes which I’m happy to call my own! This specific recipe just happens to be at the charming crossroads of tasting fantastic, while involving barely any effort (and not a single blender.)

This is a recipe I’ve been thinking about for a long, long time – based simply on some stove-side musing, while using Thai yellow curry paste in its intended form. It occurred to me, while tasting the curry sauce I was stirring and simultaneously stealing small spoonfuls of the curry paste from the jar to eat – that its savoury, salty fulsomeness might be surprisingly wonderful and slightly cheese sauce-adjacent draped over pasta.

I figured this concept might also require what we in the business call a soft-launch – by which I mean, I made it just for me and my brother on a night when my parents were out. It was all I had hoped for and more: the pasta and creamy roux provided a smooth tranquil background to the mellow heat and heady mix of spices in the curry paste, somehow – corroborated by my brother – quite bewitchingly cheese sauce-like – and yet also its own unique creation. What I’m trying to say is, this definitely tastes like yellow curry paste and pasta, and that is a very good thing, and yet it doesn’t taste incongruous. It’s so good, even though its main ingredients weren’t originally intended to be bedfellows – just so good! Besides, 2020 has made strange bedfellows of us all, and this mac and cheese is precisely the sort of comforting and easy tuck you want at this destabilisingly intense and hyper-emotional time of year – or indeed – any time.

So simple, so delicious, maybe the best vegan mac and cheese I’ve ever made? A recipe by myself.

1: Bring a pan of water to the boil, add plenty of salt, and cook the pasta until it’s, you know, cooked.

2: Meanwhile, toast the breadcrumbs in an extra tablespoon or so of coconut oil in a saucepan over a medium heat until they are lightly golden brown. Transfer them to a dish and cover to keep warm until required.

3: In the same pan, melt the coconut oil and stir in the curry paste, heating it through for a minute or so. Add the flour and stir for another minute or so, by which point it should be a very thick, orange-coloured doughy roux.

4: Add the soymilk, a little at a time, stirring it into the roux the entire time to prevent lumps – it may help to switch to a whisk at this point – and continue stirring constantly over a medium heat until the sauce is thick and, well, saucy. Add about a quarter cup of the pasta water to the sauce and continue stirring. Once it looks thick enough to coat, pleasingly, the pasta, remove it from the heat. If it gets too thick, however, just stir in some more milk or pasta cooking water. Stir in the nutmeg, and then taste to see if it needs any more seasoning – you may, quite justifiably, wish to add more curry paste, which I encourage you to do.

5: Drain the pasta, stir it into the sauce, and sprinkle the toasted breadcrumbs over the surface. 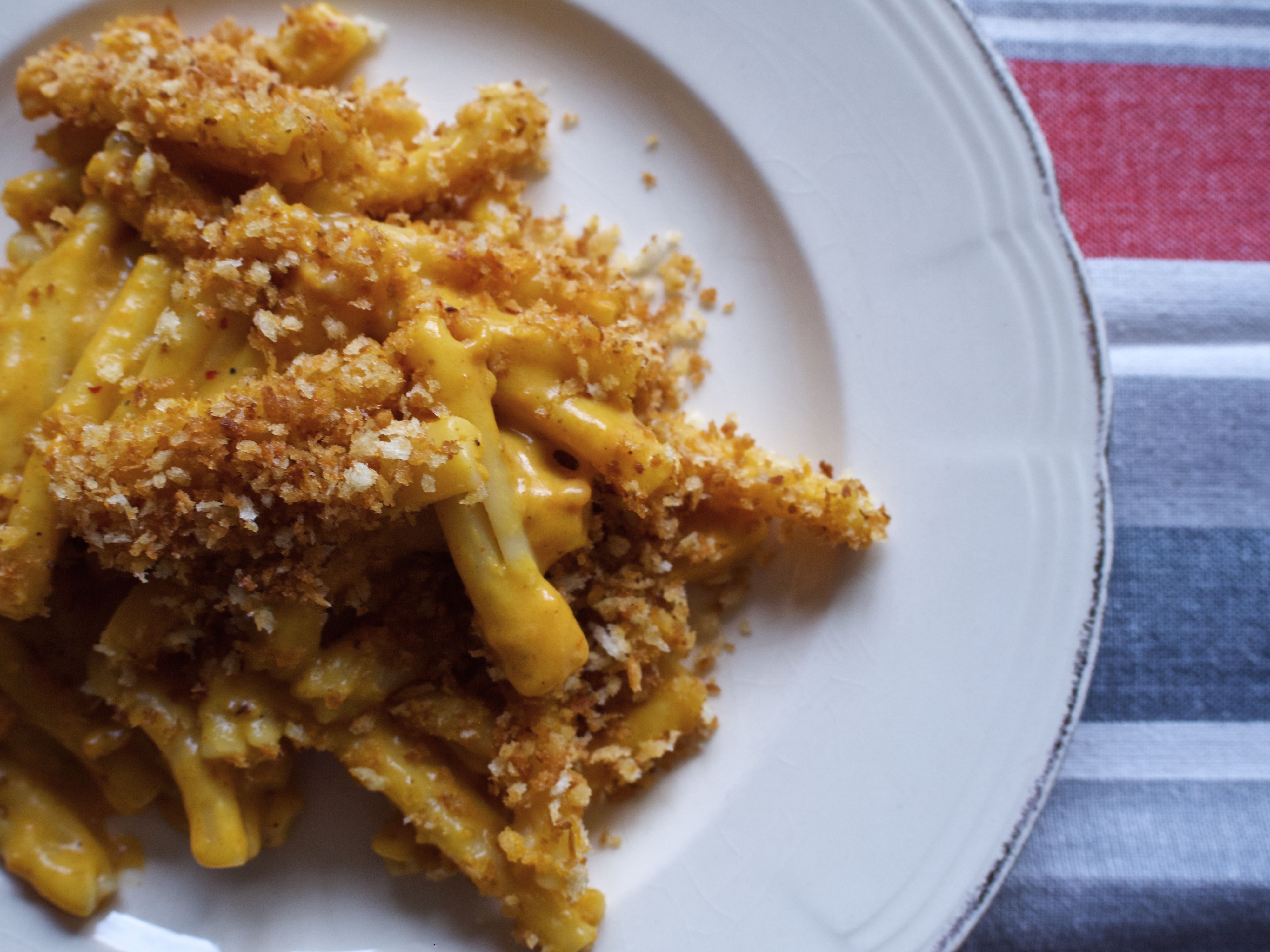 LA WEED, by Allison Stone from her latest album of the same name. A long-awaited new release from Stone brings the year to a close in a slightly more bearable way – I love the title track and just everything from this album, it sort of sounds like Elastica if they were slowed down and then sped up again but only slightly?

Supervixens, by AR Kane, I know I talked about this song last week but the truth is I just have not stopped listening to it! And nor should you! Can you honestly tell me that whatever else you’re doing right now is more important than this?

Lonely Train by Judy Henske. Equally at home in folk as she was doing torch songs, this is more the former and showcases her jaw-dropping rich howl of a voice as it surges over an urgent, steam-powered guitar rhythm.

PS: If you enjoy my writing and wish to support me directly, there’s no better way than behind the claret velvet VIP curtain of my Patreon. Recipes, reviews, poetry, updates, secrets, stories, all yours on a monthly basis for as little as one or two dollars. Merry Christmas!