I apologise for being an entirely neglectful blogger, but there’s two reasons why this particular post has been late-coming. Firstly after amassing 36 comments for my tiramisu, I refused to believe that my subsequent post could peak at only 12 comments. But there you have it, and now I have to face up to reality and move on. With the dizzying highs come the plummeting lows, and I remember when I used to be excited beyond belief if someone not in my gene pool commented. Ah, Tastespotting and Foodgawker, how you toy with my self-esteem. The other reason why I haven’t posted is because I’m 99% sure that my life is happening in double-speed, like when you press fast-forward on a DVD. It’s the only explanation for why it’s SEPTEMBER THE 9TH already and I still feel like it’s mid-June.

I found out a morsel of intensely exciting news recently: Neil Young is headlining the Big Day Out music festival next January! *hyperventilates* I am such a fan of his, oh my goodness, his music is amazing and he’s so amazing that he makes me forget my grammar and write unintelligible run-on sentences. I have a small but perfectly formed list of people who, if they ever come to New Zealand, I have to drop everything for, and Neil Young holds pride of place on this list. (In case you’re wondering the other members of this exclusive club are Idina Menzel, Jamie Cullum, Morrissey, The White Stripes, Leonard Cohen, and Rufus Wainwright, who we were lucky enough to see earlier this year.) I absolutely have to go, even if it’s the most dire, shambolic set he’s ever played it won’t matter because it will be Neil Young. If you don’t have the faintest inkling of who this man is, please get hold of one of his many many albums. I personally recommend Tonight’s The Night or Rust Never Sleeps, (which features such choice lyrics as that which I quoted in my title as well as the particular gem, “I’m gonna ride my llama, from Peru to Texarcana.”) His most mainstream, crowd-pleasing effort would be Harvest, but I prefer the other two. Of course, it’s all genius.

Speaking of people that make me hyperventilate, in this case with laughter, Tim and I went to see Bill Bailey on Thursday. I’d never been to a comedy gig in my life so wasn’t sure what to expect – apart from imminent hilarity – but it was an absolutely scorchingly funny night. Bailey has that classically British comedic grip on the English language, like say, Steven Fry or Rowan Atkinson does, the sort of person who knows how to use the word “fettle” or “thicket” to best effect. Laugh? I positively wept.

And we got to meet him after. As I’m not from London or New York or some other theatrical metropolis there isn’t much opportunity for a gal to go stage-dooring. The last time I did it was to meet Baryshnikov in 1995. In fact Tim and I weren’t quite sure if Bailey would even appear or what the protocol was, but we decided to be adventurous. There was every chance that we could have inadvertantly found ourselves in the “discreet back entrance” (as it were) of the strip joint next to the theatre but luckily the stage door was clearly labelled. We waited for about half an hour, and there were about ten or so other people with the same idea as us. I must say we were the quietest. I figured that if he was going to appear it would be best to remain calm and respectful rather than thrust a ballpoint in his face and demand he take a dozen photos.

And then he appeared! Famous person! Aaagh! He had his very young son with him and I felt a bit bad but he was very jovial, signing and taking photos with everyone. Tim and I got sort of pushed to the back but we managed to get our programme and tickets signed. I told him that I enjoyed his cameo in Hot Fuzz, he said thank-you. Someone took a photo of us but unfortunately the camera didn’t save it. Well that’s what we thought till we found it on the memory stick three days later… 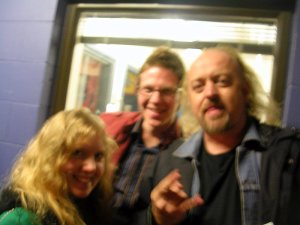 Not the best photo by anyone’s standards but a photo nevertheless, and therefore precious. Look at him! Isn’t he delightful looking! And in case you’re wondering, I’m not actually that short, I was just lunging to remain in the frame.

On Friday Tim and I went to see The Dark Knight again with some vouchers that we had for the Embassy theatre at the end of Courtney Place. I’d never been before but it’s a staggeringly beautiful building. I can see why Peter Jackson chose to have the premiere of LOTR there. The toilet alone is nicer than our flat, and almost as big. TDK was all the better for a repeat viewing. Heath Ledger really was incredible in the role. And all those explosions! I hope it does well at the Oscars.

Before the movie, and with some sense of giddy extravagance, Tim and I decided to go out for dinner. We ended up at Istanbul, a delightful BYO on Cuba Street. I’m almost loathe to tell you about it because it was so good. Reasonably priced, fresh, delicious, enormous meals, astoundingly swift service, and these filo pastry rolls filled with feta cheese that make me weak at the knees just thinking about them.

Speaking of things that make me weak at the knees…okay so this oaty slice – or scrottage as it’s known here – may not look like anything special, but it tastes fabulous. I whipped up a batch of these yesterday in about 20 minutes, they are the perfect thing to eat if you are in a hurry as the sugar keeps you going right away and the oats give you energy down the line. And it tastes amazing – chewy, nutty, caramelly, old-school delicious.

Adapted from the Best of Cooking for New Zealanders book.

Melt the butter, stir in the sugar, golden syrup and baking soda. Carefully fold everything else in, spread into a good-sized tin, well greased, and bake for 15 mins at 180 C. Cool, and cut into squares. It may look a little soft and puffy coming out of the oven but this is fine. Consider this recipe a mere blueprint though, as it can really take anything you throw at it. I added bran and kibbled rye to mine, but you could add all manner of goodies – chopped dried fruit, sultanas, chocolate chips, quinoa flakes, linseeds ground or whole, pumpkin seeds, etc. If I am going to be adding more things to it I tend to up the butter slightly just to give it more “glue” to hold together.

Above: In spite of the fact that it makes me sound like someone who would name their child Sebastien and make him learn ancient Latin and French at the age of two, I would smugly like to make it known that I used 7-grain flour in this recipe.

And finally this post cannot go by without acknowledging Fathers’ Day. I’m not really into making a huge fuss of these kind of days – to me it feels too much like the people who call Christmas the “Primary Gifting Period” have won – though it’s possible I’ll be all about the presents once I actually have children. But in the spirit of enforced nationwide cheesiness…to Dad – musical genius, staunch defender of Otaua Village, cat whisperer and maker of the best scrambled eggs: 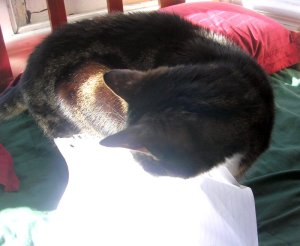 Above: Wait, what does that piece of paper say, Oscar?

Hope you get to spend at least part of your day looking like this: 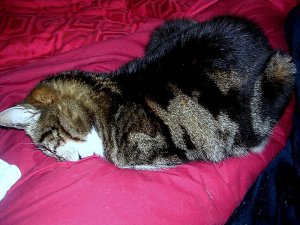 Why yes, I am attempting to parlay Oscar’s cuteness into his being an internet sensation.

Tomorrow: Rent closes on Broadway after 12 years, and I will attempt to provide some kind of tribute to this flawed but incredibly important show.