I apologise in advance if this post is lacking in my usual sparkle and moxie (presuming of course that I usually possess said qualities), Tim and I went out last night to our good friend Dr Scotty’s birthday shindig and…I awoke this morning with a sliiight (by which I mean thumping) headache. And now I’m craving apple crumble and so help me, we have no apples. Tim and I had a great night though, and I made some chocolate cupcakes to add to the general pool. At the last minute I adorned them with some garish sweets that mum gave me a while ago, and took a quick photo.

Above: Yes, I took the photo on Auto but I was in a hurry, my point being to illustrate the alarming extent to which these lollies resemble plastic. And don’t they just? But nothing says “par-taaayyy” like an elephant on a cupcake. They certainly seemed to go down well.

When I saw this recipe for Manti last week in the September 2004 Cuisine magazine I thought, “I’ve got flour, I’m got mince…cheap dinner! Kapow!” It wasn’t until halfway through that I realised I was actually knee deep in home-made ravioli, which, when put like that, sounded so much more complicated.

You’d think I would have figured it out sooner, since it completely resembles ravioli In. Every. Way. It really is easy in execution though, and has that rare virtue of being something new to do with mince. This is supposed to serve 6 as an entree or light lunch…but you could also comfortably serve it as dinner for two people like I did.

Okay I have a confession to make. After extolling the simplicity of this recipe, while re-reading it to type it up I just, JUST now realised that I actually missed out an important step. Where the recipe it tells you to cut the pasta into small squares, I just…didn’t. So Tim and I ended up with eight large ravioli as opposed to many small, dainty pieces as per the recipe. I mean it was delicious but…missing a whole step of the recipe? In the words of Rush, “Why does it happen? Because it happens.”

Combine the egg with 1/4 cup water, mix into the flour and knead for five minutes till the dough is smooth and elastic. Wrap the dough in plastic wrap and chill for half an hour. Chill the dough that is, although feel free to kick back and relax yourself.

Filling: Mix the following in a bowl.

250g minced beef or lamb
1 medium onion, grated (I used some of Nigella’s caramelised onion that I’d made earlier and frozen in 100g lots. I haven’t blogged about it so…nevermind)
handful finely chopped parsely
pinch of good salt.

Cut the dough into six pieces, and roll out each piece as thinly as possible. I did this by layering it between two pieces of gladwrap, which made it clean and easy to roll without sticking. Cut each rolled out piece into 5 squares about 9x9cm. Place a heaped teaspoon of the filling in each little square, fold over diagonally and press down to seal. Bring a large pot of water to the boil, salt well. Cook the ravioli in batches for about 3 minutes each, then drain well. 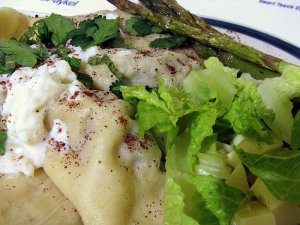 Above: Yes, I did take this photo on top of the washing machine. Well, it was the only available benchspace. I’m still Laura from the block you know.

I served the giant ravioli with a sauce made from Greek yoghurt, sumac, and chopped garlic (that I’d poached in the boiling pasta water to soften and mellow the flavour). Roasted asparagus and cos lettuce on the side, coriander sprinkled over…it really was a marvelous meal, the pasta was not stodgy in the slightest in spite of my heavy-handed rolling and the sauce gave it that lovely rounded flavour that only garlic and more garlic can provide.

One more recipe, because this is too delicious to let it get lost in my archives of dinners that I’ve photographed…

From Simon Rimmer’s excellent and meaty-in-the-non-literal-sense cookbook The Accidental Vegetarian comes Pan Haggerty, which you could describe as a kind of low-rent dauphinoise. It comprises astonishing proportions of butter, cheese, and potatoes, so need I say more?

Preheat oven to 180 C. Heat half the butter in an ovenproof fan and fry the onions till soft, then set aside. Put a layer of potato in the pan and fry for a few minutes. Layer up with fried onion and sliced potato, finishing with a layer of potato on top. Dot with the remaining butter, bake for about 40 minutes. Just before serving, grate the cheese over and pop under a hot grill for a few minutes. If you don’t have an ovenproof fan, you can do what I did which was just transfer the fried onion and potatoes to a smallish pie plate. I forgot to layer the onions and just left them on the bottom but they went all caramelly and soft and wonderful so you know, serendipity! Oh and I used what was left of the Havarti cheese that mum sent down with me so feel free to use whatever you have to hand.
.
Once again, sorry for lacking in lustre, I’m just pretty weary. Tomorrow Tim and I will attend our last ever lectures at university, which is pretty heavy, although we aren’t altogether finished – I have a socking great essay due on Monday and we both have an exam on the 4th. Hopefully after a good night’s sleep I can produce the kind of bloggery that you deserve…especially since this blog is almost one year old. Good night!

21 thoughts on “Pasta Of The House”