What a kerfuffle. I apologise heartily for neglecting the blogs I normally peruse loyally. If it’s any consolation, between studying for my exam next Tuesday, stressing about WPC Ltd’s attempt to bring their ‘environmentally friendly’ waste oil treatment plant to my hometown, vigorously promoting the protest video on youtube, and working, I’ve barely managed to attend to this blog. What can I say, it’s rather difficult to type when you’re shaking your fist at people. It makes me so furious that the WPC and members of the Franklin District Council that support them can go to bed at night, placidly untroubled about what they’re doing to an entire community, while I find myself reading the same page of Kerouac’s On The Road seven times because I’m so distracted with worry (perhaps also due to this book not being nearly as good as everyone claims it to be, perhaps not.) The hearing to decide the fate of Otaua is happening today and tomorrow, so you understand that I’m a little jittery. I’d like to say now that it was four years to the day on the 29th that my maternal grandfather died. He spent most of his final years living just up the road from us, and I imagine him watching over the proceedings, perhaps also with a fist held angrily aloft.

To the food: There is something about recipes involving gelatine that fills me with trepidation, I think it stems back to an incident involving Neenish Tarts when I was a child. The recipe called for the filling to be set with the dreaded stuff, which formed stringy, gummy strands the moment it hit the mixture. As people politely bit into the finished tarts, their teeth would meet with clumps of it, the texture of chopped up erasers marring the otherwise smooth and creamy filling. My gelatine experiences since then have been few and far between. Earlier this year though I spontaneously purchased some gelatine leaves from Kirkcaldie and Staines and decided to use them the other day to make Apple Tea Jelly, a recipe from the September 2005 Cuisine magazine that has held my attention ever since I read it. The weather is finally warming the shoulders enough to make this sort of thing even worth thinking about.

Above: Gelatine leaves. Nigella Lawson raves about them, which is enough to get me to hand over significant amounts of coin for something. But don’t they look like some kind of ethereally golden church window? Hold them towards the sun and the Hallelujah chorus practically starts playing. Of course, those with a delicate constition may want to ignore the sole ingredient in these fairy-like sheets: pig skin. Moving along!

Powdered Turkish apple tea can be found in most supermarkets, but I happened to acquire a half-full box from my aunt after a comprehensive cleanout of her well-stocked pantry (which, up until said cleanout, was always something of a mystical haven for me, my version of Narnia). I never knew what to do with the stuff – it’s too sugary to actually drink (I prefer a stiff black tea or something a bit more minty and natural, thankyou), and although the powder is intensely delicious eaten by the spoonful – like the best sour apple sweets you’ve ever tasted, dissolving ascerbically on the tongue – the idea of eating the whole lot makes me wince. So when I found this recipe, which uses a good amount of the stuff, I verily leapt with joy. 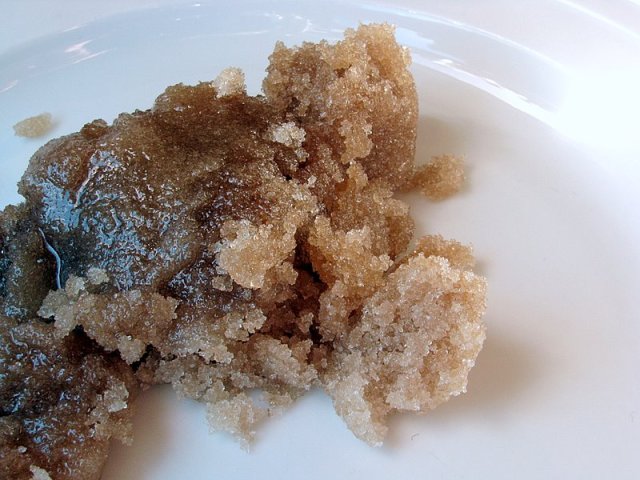 Above: The apple tea powder. Seriously, if you have some kicking around, try eating it with a spoon. It’s intensely yummy, especially if you have what Nigella refers to as a sour tooth, rather than a sweet one. I have what I call a “fat tooth.”

The recipe is very simple and specifies six 100ml dariole moulds, but since I was only feeding Tim and myself, I poured the whole lot into a little 600ml, old-fashioned Tala tin – also from that same aunt come to think of it. (Cheers, Lynn!)

I funked it up a little by adding an apple-friendly chamomile teabag to the boiling water for a spell, and strewing some finely-chopped mint through the mixture once it was nearly set. But first: dissolve the apple tea in the boiling water. While that’s happening, soak the gelatine leaves in a large lasagne-style dish filled with cold water for about a minute. They will soften slightly, and then, one at a time, pick them out of the water, squeeze them – which is rather squelchily pleasurable – and stir into the boiling apple tea, whereupon they will dissolve instantly. Pour the gelatined apple tea into your chosen receptacle, and then refrigerate for 8 hours or overnight.

Above: The unminted jelly, ready for refrigeration.

When you’re ready to eat it, find a likely looking person (in my case, Tim) to dip the tin briefly in hot water and turn it out onto a plate. I refuse to do such things myself, I know it will only result in tears – not necessarily mine – and jelly in my ears.

And what a beauty it is! Shivery, diaphanous, and with a subtle, fragrant apple flavour that is a million miles from whatever lurid, food-colouring flavoured stuff you can get out of a packet. I love packet jelly, but this is just absolutely gorgeous stuff, alluringly wobbly and very impressive to the casual passer-by (“you made jelly? Not out of a packet? Ooooh.“) I imagine it would be wonderful on a hot summer night, after some kind of spice-heavy dinner.

Like I said, I have been attempting to study for my English exam next Tuesday. In fairness to WPC Ltd, there has been one other thing distracting me from my books: The Mighty Boosh. I’ve been a fan for a while now but Tim and I got ourselves a DVD of Season Two and watched all six episodes in one sitting. I laughed so much I nearly pulled a muscle. It’s sheer brilliance, a little like Flight of The Conchords only British and surreal and even funnier (I realise I seem to compare everything to FOTC but that’s because people are generally afraid to try new things unless they can relate it to something they already know. Gelatine – it’s like Flight of the Conchords, only it dissolves in hot water!) More loveable than Little Britain, more endearing than Mr Bean, more surreal than Green Wing, and almost as sharp as Blackadder. Actually I’d put it on a par with Black Books. Hath there existed greater praise for comedy?

The other exciting thing going on – okay, so you already know about Neil Young coming to town, but guess who else is going to be here in January. You’ll never guess. Okay: Leonard Cohen. The gravel-and-maple-syrup voiced lothario himself. Since Tim and I were lucky enough to witness Rufus Wainwright earlier this year, that will be my entire Canadian Music Tripartite that I’ve managed to see in concert and I’m only 22! I honestly never thought I’d get to see Mr Cohen, at least not in New Zealand of all places. I couldn’t be more excited than if Idina Menzel herself decided “what the heck” and booked a tour of New Zealand even though you can’t actually buy her albums in shops here (are you listening, Warner Brothers Records?) Although there have been whispers over the ether that Morrissey himself *faints* might be paying a trip to New Zealand in January. As you can imagine, what with one thing and another, I’ve been having a lot of mood swings lately. Thanks awfully for sticking it out with me.

Finally, further proof that the cat is secretly on quaaludes:

Above: “I’m under your bed, befriending your dust bunnies…” He just sat there, with enough of him sticking out so we could see him. A desperate cry for attention (as if he doesn’t rule our lives already) or something more sinister?

Wait, what’s that you say, Oscar?

If the above makes no sense, visit I Can Has Cheezburger? for further info (it still may not make sense, but you should get a laugh out of it.)

Next time: Not sure, though I’ll try to keep it coherent. I did buy myself (with the aid of a voucher) the Wagamama Noodle cookbook which I’ve been getting lots of use out of, so mayhaps something from that. The video on youtube has hit a mighty 1800 views, words can’t express my gratitude to those of you who have been watching it. For further information, keep checking the Otaua Village Blog for updates.

Leave a Reply to Laura @ Hungry and Frozen Cancel reply