I’ve been joyfully camping in the great outdoors for the past few days and will return soon, this being just a brief respite for those modern wonders – high pressure showers, the sound of a flushing loo, the internets. The camping I do is nothing too taxing though – I’ve never drunk so many gin and tonics nor eaten so much blue cheese in my life and yesterday I read one and a half books in the space of a sunny afternoon. The only footwear I brought with me are jandals and ugg boots, so there’s no fear I might have to go hiking anywhere. Yes, that sort of camping. My whanau have been going to this particular beach yearly since I was but a wee baby and in coldest, rainiest July (remember, New Zealand’s seasons are opposite to the Northern Hemisphere) I think of camping with longing. I’m certainly not going to reveal where it is that we go however, it’s already far too crowded. (Anyone who has seen the Outrageous Fortune Christmas special episode will understand – “This is our spot!”)

Christmas itself was a jolly affair, with several dishes from Nigella Christmas making their debut successfully. It is this time that I really love though, when it’s neither this-year-nor-last-year and all I have to do is lie about in the shade – being pale as I am – and re-read beloved novels. I have also been reading lots of newspapers and magazines as they appear and have noticed that they all seem to have a round up of the years events. I was planning on doing my own recap of the year, and I typed it all out, but got to November (I know, so close) and suddenly got bored and did an abrupt volte-face on my idea. However who could forget this moment: 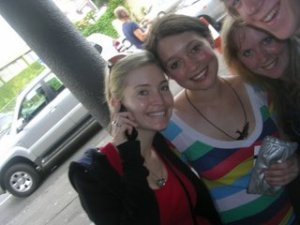 Just before the faint-makingly good Rufus Wainwright concert in February, Tim and I met Siobhan Marshall and Antonia Prebble, who play Pascelle and Lorette West respectively on Outrageous Fortune, the best New Zealand TV show there is (and I mean that in a straight up way, not a damning-with-faint-praise way). 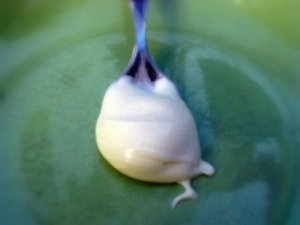 Another exciting moment- in April, my first ever photo accepted to Tastespotting.com, that wonderfully inspiring website that can be something of a necessary evil to food bloggers. I wish I could say that my blog would have been as successful without it but frankly I don’t think it would have. Either way, this shot of a spoonful home made creme fraiche made it on there which was a huge boost to my confidence as a blogger.

And of course, Oscar the kitty and his death-defying faceplanting skills was there to boost morale at regular intervals.

There are a million other things I could have included here (these are just the photos I have handy) but the point is, it has been a long, varied and at times arduous year. As all years are in their own way, I suppose. I’ll be back in Wellington and cooking up a storm soon enough, and this place will once again resemble a fully-functioning food blog. I tend not to go in for wild revelry at this time of year, in fact sometimes I wish I could skip New Years altogether because that whole, desperate, “we must have FUN” thing can be all too stressful, and I prefer to have fun on my own terms rather than at the dictation of the calendar. All that Scrooge-ness aside, I sincerely hope all my readers have a fantastic time wherever you end up, and that 2009 heralds a vaguely more optimistic time for us all. Anyone have any New Years resolutions they plan on actually sticking to? At this stage nothing has really occurred to me personally, but I’d be interested to hear any – especially the more obscure. Has anyone here resolved to put on weight? To speak in an affected French accent for at least a month? To dye their hair a different colour each week? To take up carpentry? Do tell, and do have a safe start to the coming year.

PS – title quoted from RENT…what else?

One thought on “It’s Gonna Be A Happy New Year…”