With the briefest of glances o’er the foodblogosphere (yes, that is a word…now…) I observe that there is a plethora of pink-tinted, heart shaped, chocolate festooned Valentine-themed food going on. I personally don’t go in for Valentine’s Day myself, considering it a bit commercial and far too likely to inflict bitterness upon the firmly un-coupled out there. However there is a tiny, miniscule part of me that secretly wouldn’t mind being whisked off to Paris for the weekend or being presented with a sculpture of my own head made from chocolate mousse, or being forcibly thrown by forklift into a rose garden or whatever it is they do for Valentine’s in the movies. My actual day involved, would you believe it, nothing of the sort. Instead Tim’s friend, sister, sister’s friend, ex-flatmate, and flatmate’s friend all appeared for drinks. Fun – fantastic to see ex-flatmate again – but hardly condusive to heart-shaped food. Nevertheless, people need feeding, and drinkers need blotting paper, so I made an enormous vat of pasta (Nigella Lawson’s Penne Alla Vodka from Feast, it is seriously good) and for dessert, in a nod to the season, I made a tray of chocolate brownies.

Most of the time I feel that a brownie is a brownie is a brownie, there are forty squillion recipes out there for them, all promising ultimate-ness and all being fairly similar. Nigella’s recipe is, in all honesty, cut from similar cloth to anything you’ve read about brownies before…only the proportion of ingredients is roughly quadruple anything you’ve ever fathomed. They make for an incredible finished product, but I’m warning you, don’t read the recipe if you are faint of heart and don’t have your smelling salts handy. They will cost you about $300 to make. There is no coy concession of this from Nigella herself of course. And it does make quite a lot…

Above: Doesn’t the batter look good? I mean, I’m not just looking at it, I’m positively leering. Don’t you just want to buy it a drink, tell it to “get in my wheelbarrow, you cheeky vixen” and take it home? Quoting the Mighty Boosh here by the way – that’s not my own personal pick up line (although you’re welcome to try it…)

Brownies for An Economic Recession (sarcastic title my own, Nigella goes for the somewhat more fanciful “Snow Flecked Brownies”, admittedly this book was published in 2004 so she wasn’t to know about the grim future. From Feast.

Preheat the oven to 180 C. Line the base of a 33x23x5.5cm roasting dish with baking paper. That’s right. A big, proper roasting dish that you’d normally cook a side of pig in. This is serious, y’all.

1. Melt the butter and chocolate together gently. I tend to let the chocolate melt a bit first before adding the butter so they both finish at the same time…
2. In a big bowl, beat the eggs and sugar together. Carefully pour in the slightly cooled chocolate mixture and vanilla extract.
3. Fold in the flour, stir in the white chocolate buttons.
4. Carefully spatula the whole lot into the roasting dish, smoothing the top. Bake for 25 minutes. Don’t be tempted to go for longer. After spending half a week’s pay on butter, chocolate and eggs, you don’t want dry brownies. Cut into squares when cooled some.

These are really, really good. I’m getting a little twitchy now just looking at pictures of them, knowing that they are right there in a tin in my wardrobe and I could grab one right now…yes, in my wardrobe, and hey, don’t judge, the kitchen in my flat is not quite visible to the naked eye and therefore one has learned to be creative with storage space. Which is why canned tomato, dried pasta and black beans jostle for position with my Swiss ball and my collection of high heels. If I call the whole set-up ‘charmingly bohemian, like RENT’ it’s not so annoying. Although it would be much easier to actually be charmingly bohemian if I lived in a loft in New York. Anywho… 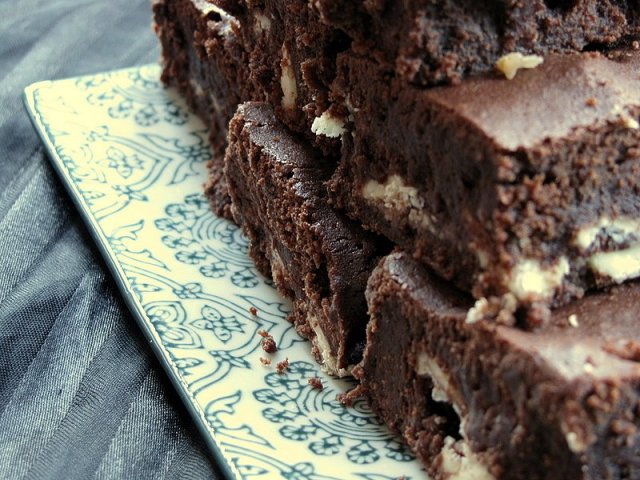 If Valentine’s Day is something you go in for, I hope it went well for you. Tim was working more or less all of the big day so I looked out for number one and went shopping. I bought myself some books with a voucher I had – The Cook School Recipes by Jo Seagar and Everything Is Illuminated by Jonathan Safran Foer. Both just jumped out at me, I didn’t set out with anything in mind to use my voucher for. Jo Seagar – despite her heavy use of sweet chilli sauce in everything – has always endeared herself to me. She seems to particularly excel at writing inspiring recipes for nibbles and baking, and since those are my two favourite food groups it makes sense that I should gravitate towards her. Plus I like the idea of supporting NZ cooks in these uncertain times. As for Everything Is Illuminated, I casually picked it up, read the first couple of lines, and knew instantly that it was something special. I’m only halfway through but – unless it descends into a chaos of derivative rubbish – I highly recommend it.

It is worth mentioning that on Friday night we caught up with our friend Dr Scotty who is finally back from his sojourn to Thailand and Cambodia. He returned looking all sleek and tan and it was SO cool to see him again. The fact that he got to New Zealand on Thursday and yet was able to converse to me about watermelon sorbet the very next night is testament to the rare breed of cool that he possesses.