Tim and I have been pondering whether to purchase an espresso machine. Not the sort where you press a button, I mean the real deal, steam wand and inserty-doohicky with pressy-downy thing and all that. Not one of the ones that costs the same as a small European commonwealth either, we’re neither of us rich and still trying to save to travel. But there have been some inexpensive ones on the market and we both love our coffee. And you know, good to help out flailing businesses in the recession and whatnot.

Apropos of little, I mentioned a while ago on here that I did a training session at work where I was defined as a “Creator-Innovator.” We had a follow up sesh this afternoon. Exciting as being creative and innovative sounds, I can’t deny that bearing the rather triumphant title of “Thruster-Organiser” appeals also. Unfortunately I am neither organised nor sufficiently thrusty according to the pre-test. Anyway, as previously stated, Creator-Innovators are future-thinking dreamers, full of ideas. And not so good with deadlines. As you may have noticed.

Even though we don’t even own the espresso maker yet, I’ve already dizzily planned what I can make with the egg whites left over from making the ice cream that I’ve set aside a precious vanilla bean for so that we can make affogato (affagati?). Did I mention that Creator-Innovators sometimes appear to have their head in the clouds? (That’s actually what the description in my booklet said. Head in the clouds.) I’m actually excited about cooking from the leftovers of something I haven’t cooked yet to go with something that doesn’t exist yet. The training session was nothing if not a windex-ed mirror held up to my soul.

We were fortunate enough here in New Zealand to have Monday off for the Queen’s Birthday. It’s nice to have a baggage-free long weekend, and the occasional four-day week cannot be underestimated in terms of well-being and morale. I did very little, apart from meeting a friend in town for coffee on Saturday, and it was all rather blissful. The fact that the weather was unfortunate helped with this – although largely cold, bleak, rainy and windy, there were also intermittent bursts of hail and blazing sun. Tim had about forty different essays to write for uni so I kept out of his way by baking and doodling and happily pottering through books and magazines, my trackpants ensconcing me cosily like a pastry case. On Saturday night I made a slow-cooked beef stew – all happiness-inducing cold weather weekend activities.

So, the baking. Y’all know the torrid flirtation I have with white chocolate. Buttons of it lure me, siren-like to the cupboard to eat by the handful. An actual bar of the stuff can be dealt with in a matter of semiquavers. I don’t know why – it’s not as darkly complex as proper, cocoa-y chocolate but as I said today in the team meeting when talking about RENT*, you can’t predict or control what will have an impact on you in life. For me: white chocolate.

* We had to bring in some pictures/things that would help describe ourselves to the group. I may or may not have indicated explicitly that Nigella Lawson has influenced every business decision I’ve made this year. I was met with troubled shuffling of papers from the team.

So when I saw this recipe for white chocolate cheesecake cookies on Hayley B’s blog, well, I’m sure I don’t need to explain at this late stage how enamoured I was to the point of openly salivating with the very thought of them. (apologies Hayley, for besmirching your good name with imagery of me drooling, but you started it with all that white chocolate.)

The recipe is very easy and bears the distinct virtue of having the finished product actually taste even better than the uncooked dough. Don’t try to pretend like you haven’t tried raw cookie dough. You have the butter and sugar, which tastes pretty special, then you add egg, which makes it taste all raw and nasty, but then in goes the flour, which somehow neutralises the egg and makes it taste amazing again and…well that’s probably enough delving into my dark psyche for one day. I’ll give you the recipe.

I modified this ever so mildly by using roughly chopped white buttons instead of chips.

Preheat the oven to 180°C, line a couple of baking trays with baking paper. Cream butter and sugars together, add the egg, cream cheese, and vanilla extract and beat until well-incorporated. If your cream cheese is super fridge-cold it won’t mix in very well but I liked the idea of having small pockets of cream cheese in the cookies anyway. Add the flour, baking powder and salt. Fold in chocolate. Try not to eat the lot. Roll tablespoons of dough into balls and place on baking tray. Flatten each ball if you want a flatter cookie, but they’re fairly well behaved and won’t spread alarmingly. Bake for 8 minutes, or until edges are slightly golden. Don’t worry if they look underdone, as long as they are visibly set on top then they’ll be perfect. If you bake them any longer they’ll lose the cheesecake tang. They will be very soft but once cool will be recognisably cookie-ish.

These are basically the nicest cookies I’ve had since I was born.

They are soft with a soft crumb, and a magical sweet-and-tang kick from the combination of cream cheese and sugary white chocolate. Seriously…genius. Words fail me on how to describe the vanilla-butter flutter that the white chocolate imparts and how it contrasts with the almost lemony squish of cream cheese. Actually that sort of does describe it really.

Because we had the necessary ingredients, and again, to remove myself from out of Tim the Vigilant Essay Writer’s way, I decided to just…keep on baking. I first made Apple Blondies back in July 2008, a simpler time when my life too vaulted from uni essay to uni essay and I hadn’t yet tasted quinoa. They are no less delicious 11 months later. The fact that they are called Blondies I could take or leave – this is basically one of your average slice-cake things. I don’t know if I’m being particularly close-minded but I personally feel that it’s not a blondie unless a goodly portion of it is made of white chocolate. And therefore, not a brownie. Actually come to think of it, this recipe would be amazing with a couple of spoonfuls of cocoa in it. I guess you could call it an apple brunette in that case. 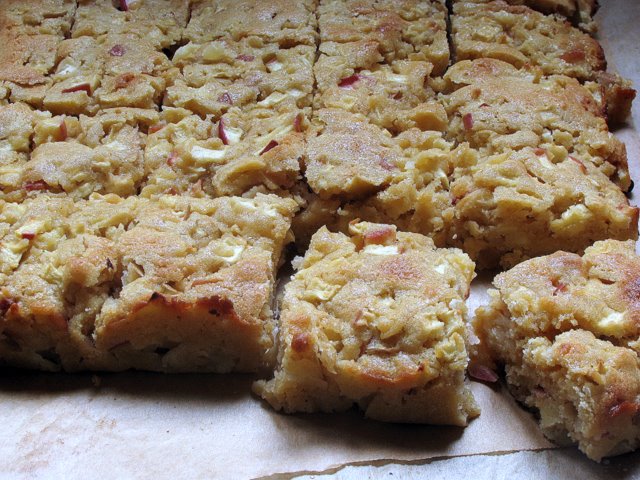 The recipe can be found here from last year’s blog, although you’ll have to wade through all manner of other things before I actually start talking about the apple blondies. Ah, the naive Hungry and Frozen of 2008, with so much time on her hands. The blondies were as moist and apple-tatious as I remembered them to be, although considering their presence in my life in conjunction with the cookies I decided not to ice them. Yes, after eating half a batch of white-chocolate encrusted cookie dough and then making sugary apple cake, not adding icing can definitely be classified as a heavy consession.

I used four apples in the recipe but really, two is plenty. Any more and the batter almost can’t hold it all together. What I got in the end was still delicious – a moist, fruity counterpart to the full-on sugar of the cookies. The spritz of apple in the batter made the kitchen smell incredible while it was baking. Many thanks to Kelly Jane, via whom the recipe was snaffled all those months ago.
_________________________________________________
On Shuffle whilst I type:
Here I Go Again from the Rock of Ages Original Broadway Cast Recording (The Great Whitesnake Way?)
That’s The Way by Led Zeppelin, from Led Zeppelin III
Dogs Were Barking by Gogol Bordello, from Gypsy Punks: Underdog World Strike
_________________________________________________
Next time: possibly less psychobabble, more slow-cooked meals. I made an Italian beef casserole with pasta on Saturday and last night’s dinner was beef shin in stout with prunes, a Nigella Lawson recipe from How To Eat. I’m heading down to Dunedin this weekend for work (my first ever SmokefreeRockquest!) so it may be a tiny while between posts but I’m sure the wider world will cope. Peace.

10 thoughts on “sweet dreams (are made of this)”