Disclaimer: this particular post is photo-heavy, so if your internet browser has all the thrust of an electric toothbrush you may want to consider coming back another time. Although, these photos were all hastily snapped on the Automatic setting so they probably aren’t that big, pixel-wise. You should also know that I’m still in a stumbling haze of fullness and am quite, quite sleepy on top of that. Who knows where this heady combination could lead us. But – tonight’s post will be – hopefully – a kind of recap of the day that was the Flat Christmas Party. I’ll return to what you could call regular programming with the next post. I guess now is as good a time as any to be a new reader – if you can handle all this then we’re going to get along just fine!

My assessment is that yesterday’s lunch was our best Christmas dinner yet – although each year has its fond memories. (Like the rugelach of 2007….that’s all I can think about right now actually)

Nigella’s Soft and Sharp Involtini from Nigella Bites, minus the feta but with many toasted macadamias, pecans, almonds and hazelnuts added. In my experience, involtini is basically stuff wrapped around other stuff, in this case slices of seared eggplant (one of the more boring jobs of the weekend) rolled around spoonfuls of herbed, nutty bulghur wheat and baked in tomato sauce. I was smugly eating it cold for lunch today at work – it’s even better after a day or so.

The roasted chooks. I love the way they’re sitting here in the same roasting dish as if they were buddies. It’s also partly necessity – our oven isn’t very big. We got two plump Rangitikei Free Range Corn Fed chickens, and according to the Rangitikei website the chickens are lovingly raised and are able to safely roam in the grass. The site is certainly convincing and I have no reason to believe these chickens weren’t raised in a safe, humane way – I find it very difficult to buy meat these days that hasn’t been.

Stuffing for said lucky chickens. On the left, Cornbread and Cranberry Stuffing from Nigella’s Feast, and on the right, the (dairy-free!) Pear and Cranberry Stuffing from Nigella Christmas. Both divine – the butteryness of the cornbread stuffing would be bordering on ludicrous if it wasn’t for the sharp berries interrupting each mouthful. The pear stuffing is moist and lusciously rich without being overwhelming, because it’s basically just fruit and nuts.

Silky, slippery roasted Capsicums with Pomegranate from Nigella Christmas – I bought about five packs of past-their-best capsicums from the market yesterday morning, then completely forgot that the recipe needed pomegranates. Never mind – we also needed coffee, ice and a loaf of bread so we picked up the pomegranate from Moore Wilson’s straight afterwards. (Where we are now Silver Customers on their loyalty programme!) Pomegranates really are excitingly Christmassy. But to be fair, before I got into Nigella pomegranates were linked in my mind, for some reason, with other mythical things like unicorns and reindeer (okay, reindeer actually exist, but they sound like they shouldn’t). How things change. Avocados were also cheap and perfectly ripe at the market – so they were added spontaneously to the feasting. Avocados are never not a treat.

Above: The gorgeous Scotty! Not only visual proof that we actually have friends, Scotty is modelling the Poinsettia cocktail, or at least my simplification of Nigella’s recipe for it in Nigella Christmas. I upended a bottle of dry bubbles and a bottle of cranberry juice into a large bowl, and topped it up with Cointreau and ice. The bubbles were kindly provided by Ange, the cranberry juice by Megha and Ruvin, and the Cointreau…well, we’ve been nursing that bottle since Ange’s sister left it at our old flat a few years back. The Poinsettia is intensely drinkable but not overwhelming – ideal whether the sun is over the yard-arm or not. If you’re wondering where his natty headwear is from, Anna and Paul brought along some gorgeous Christmas crackers which, once pulled to shreds, produced silver hats of such crisp quality and hatmanship that Tim and I decided to hold on to them for next year’s party. The jokes were woeful though. “Q: What do you get if you cross a skeleton and a detective? A: Sherlock Bones.” So wholesome and inoffensive it’s bordering on sinister.

As well as this there was a vat of boiled new potatoes with mint from our garden (which is where the only near-disaster of the day happened – I turned the gas on under said vat of potatoes without realising there was no water in the pot yet. Luckily an angry sizzle alerted me to this fact; apart from the occasional scorch mark the potatoes were unharmed) the Ham in Coca Cola from How To Eat (which was from the butcher in Waiuku, gifted to be by Mum and flown back to Wellington with me and frozen last time I went up home.) It was perfect pork – not weighed down with fat and gristle but utterly pink and deeply flavoursome from the Coca Cola. Also there were salad greens, roasted root vegetables, and a loaf of Heidelburg bread.

After all this eating we all kind of staggered round in a dazed stupor, bodies weighted to chairs by all the food. Blinking slowed down, just breathing in and out became unhurried and meditative. We chose that moment to have dessert. 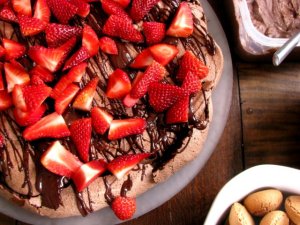 Chocolate Pavlova from Nigella’s Forever Summer. As I complained about on Twitter, I did something wrong and while enormous, the pav wasn’t very high. However, whatever I did made it taste amazing. I wish I knew! I drizzled it in dark chocolate, covered it in cheap strawberries from the market, and served the whipped cream on the side for those who wanted it. The plate that the pav is sitting on was a present from Emma, a Dunedin-based former flatmate who was also at the very first Christmas Dinner we had in 2006.

Set oven to 180 C. Do the usual pavlova thing: Whip up the egg whites till satiny peaks form, then continue to beat them while adding the sugar a tiny bit at a time. Once the sugar is all added the mixture should be thick, shiny and stiff. Sift in the cocoa and sprinkle over the vinegar, folding in carefully along with the chocolate. Spread mixture into a 23cm circle on a baking paper lined tray. Immediately turn down oven to 150 C and leave for about an hour. Once done, turn oven off and leave pav to cool completely. 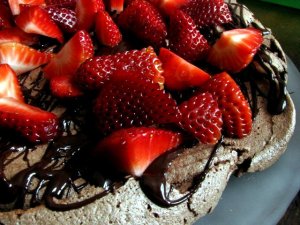 If I don’t tell you, no-one will – I made this entire pav just using a whisk. You, however, are more than welcome to use electric beaters or a cake mixer. It doesn’t make you a bad person, just a person who can, unlike myself, locate their electric beaters. 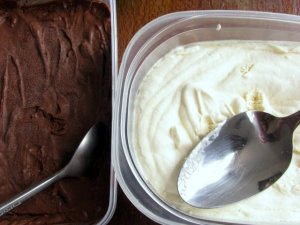 Neither of the ice creams let me down – the chocolate coconut version was rich, intense and bounty bar-esque, while the ginger ice cream was described as “ridiculous” by Ricky – call me when you find yourself offered a better compliment for your ice cream. 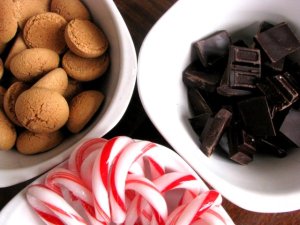 Despite nearly everyone saying they don’t like candy canes (and fair enough, it’s like eating toothpaste) we somehow all ended up chewing thoughfully on one by the end of the day. Also bolstering the pudding table were some amaretti that we bought on sale from the Meditteranean Warehouse in Newtown (on sale because their best-before date was ages ago but I don’t believe in worrying about that sort of thing) and some dark chunks of Whittaker’s Chocolate. Eventually people started to leave until it was just Tim, myself, Scotty and Ange playing spirited and politically charged card games. Our flatmate Jason arrived home from doing film work at the cricket in the rain and we chilled with him for a bit (and had already saved him a plate of food from before). While it was a shame he couldn’t be there during the day, as the Christmas Dinner is about flat solidarity, but there was no way around it – Sunday was the only day the majority of us were free to make it happen.

Tim and I after the stragglers left at around 5.30pm. Please bear in mind that I was up till 1am the night before somewhat manically stuffing slices of eggplant with bulghur wheat. I’d like to think I own my inability to take a decent spontaneous photo. By the way, the eyepatch came in one of the Christmas crackers, it’s not a regular accessory for Tim. Although, what with his diabetes and all that ice cream, he might as well get used to the feel of it. Kidding! We spent the evening watching Glee, nibbling at leftovers, and reading over all the lovely comments I’d got on my blog since I was fortunate enough to be on the front cover of the Sunday Star-Times Sunday magazine.

So, like I said, the Christmas dinner (even though it was actually a lunch, I’m just affectatious that way) was a roaring success, with people already locking in their availability for 2010. I didn’t intend it to become a giant homage to Nigella Lawson, although in hindsight…I probably did. An enormous thank you to everyone who came, who contributed with their fantastic presence and also with actual things that I asked to be brought along. Again, if there are any new readers drawn here after reading the article in the Sunday Star-Times, welcome welcome welcome and hope you see something in this madness worth sticking round for.

Music that’s happening to me these days:

My Doorbell and Passive Manipulation from the White Stripes’ wonderful wonderful 2005 album Get Behind Me Satan. We had a DVD of them playing live on while I was writing this, Jack and Meg White are both mesmerisingly compelling (LOVE it when Meg sings) and if there are any spelling mistakes in this post I blame them entirely.

The entire Time Is Not Much album, the seriously stunning debut from local MC, the soultastic Ladi6. Every time it finishes it feels like it should just…be started again. It’s that good.

Till next time: I’ll be doing a bit of dedicated basking in the truly nice feedback I’ve received about the article/cover story in the Sunday Star-Times Sunday magazine. Lest any astute readers notice that Nigella Express was the only book of Lawson’s that didn’t get a look-in this Christmas and start to suspect something (I’m not sure what, just…something) I made a Spanish omelette using a recipe from said book and leftover potatoes this very evening. If the photos turn out okay you’ll probably be seeing it up here before long.