Saturday, February 6th was Waitangi Day here in New Zealand. This is a day that means different things to different people but 170 years have passed since the Treaty of Waitangi was signed, for better or for worse. It means a lot to me as my ancestors on mum’s side kicked things off around that very time when a woman named Pourewa and a man named Charles Cossill were married in Mangonui by the pragmatically named Bishop William Williams. February 6th also marked twenty years since my first ballet lesson. Talk about significant times for the nation. I was a rotund three year old who couldn’t skip and didn’t have a pushy mother with misguided ambitions for me – and even at that age you register differences in ability and atmosphere like that – but I was the only kid in that class who could touch my head with my toes.

Potstickers are perhaps the – or at least, a – culinary equivalent of getting your feet and your head to do a high-five. The process sounds a little painful. A lot of people don’t even try it in the first place. But the finished result elicits “oohs” and “aahs” at those who attempt it successfully. Actually this metaphor is a bit useless as you really need a decent set of hamstrings to do anything flexible while potstickers just require patience…but I needed a segue into the recipe and I’m damned if I’ll retreat now. 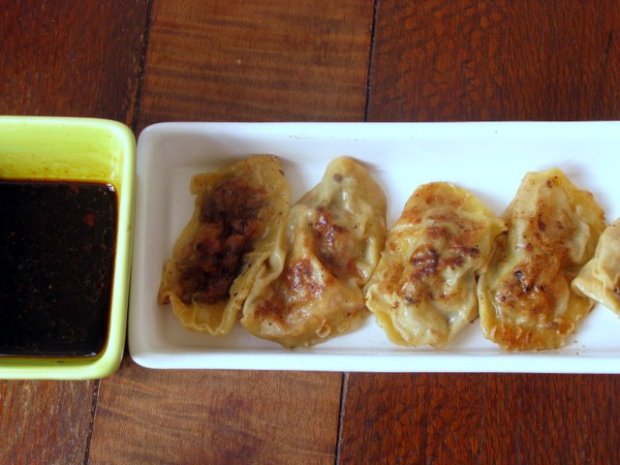 I saw this recipe in Ray McVinnie’s column in Sunday magazine a while back (the very magazine which put me on the cover! What, like I wasn’t going to mention it?) and even though I’ve seen recipes around for potstickers for years now for some reason it was this one that prompted me into action. I have to say, the Sunday magazine this week was ridiculously intuitive – it had a “Whatever happened to JTT?” piece which answered the very question I wondered as Tim and I watched a Home Improvement omnibus at 3am after getting home from Fubar last Sunday. There’s not much in this world that comforts like this – we didn’t watch a lot of TV when I was young but Home Improvement was family time). There was also an article about the man who wrote most of the jingles on the radio, when I’d just been explaining to Tim about the nostalgia I feel when I hear the ancient Auckland radio jingles (“Giltrap city, Toyota – we’re the one!”) on 1ZB after being in Wellington for so long.

I don’t love McVinnie’s column in Sunday as much as I adore his regular Quick Smart feature in Cuisine magazine but it’s still pretty engaging reading. The way he described potstickers made them seem not just do-able but necessary. I found myself lingering by the open freezers at the Asian grocery up the road, hoping wonton wrappers would be cheap – and they were. That, and the fact that there was a rapidly aging block of tofu in the fridge poured cement over the foundations of the idea in my mind. I didn’t follow his actual recipe so much as the directions but I have a feeling that as long as you keep to the method the filling is really up to you.

Potstickers (recipe via Ray McVinnie’s column in Sunday magazine)
If you want, you can take out the beef and up the tofu and cabbage a bit.

Stir fry the mince, tofu, and cabbage together with the seasonings until the mince is browned, the cabbage is reduced, and everything is good and fragrant. There’s no real artfulness to this – you just need it all cooked up.

This is great if you can get a friend to help you, if not it will just take a lot longer. Get your stack of wonton wrappers, a small bowl of water, a couple of plates and a couple of teaspoons. Grab a wonton wrapper, dip your fingers in the water and wet the edges of the wrapper. Get a teaspoonful of mince and tofu, place it in the centre of the wonton wrapper, fold it over to make a parcel and press the edges together. I folded the edges over each other and pressed down firmly. Put it onto a plate and start again, till you have as many as you think you’ll want.

Then! Heat a little rice bran oil in a good, wide pan which has a lid. Once it’s sizzling, fill the pan with your potstickers, all facing the same way. Don’t overcrowd the pan. Let them fry for a minute or two on that side, then flip them over and fry them for a minute or two on the other side. Pour over about a centimetre of water, clamp on the lid, and let them steam away till the water is evaporated. You want them over a good solid heat to aid the evaporation. Once the water is gone they should unstick themselves from the pan. Quickly use a silicon spatula or fish slice to lever the finished potstickers onto a plate, and eat them while the next batch is cooking.

One or two potstickers may well fall apart or stick obstinately while you try and remove them from the pan. This is not cause to get dramatic and throw the pan across the room screaming “Enough! I tried and I failed!” It’s just par for the course. They’re called potstickers for a reason. Eat them and move on to the next batch. 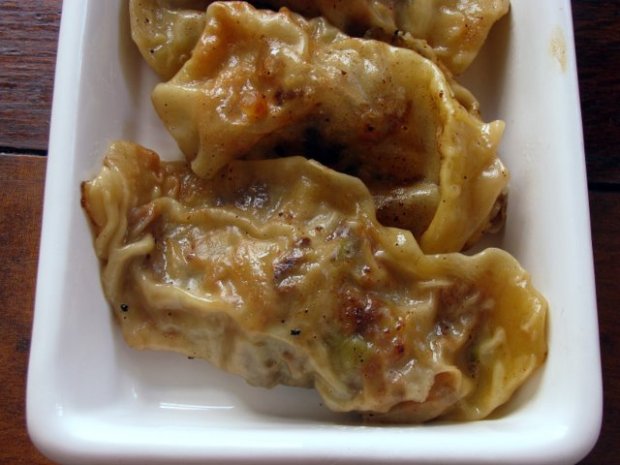 One bite, and you’ll likely forget the extensive effort it takes to bring these potstickers into existence. The frying-then-steaming method, while fiddly, makes the wonton wrappers crisp but silkily tender, encasing juicy savouryness. I made a quick dipping sauce out of soy, lemon juice, sesame oil, chilli oil and a little sugar which was an excellently zingy foil to the rich filling. Make plenty of these – we ate forty between the two of us – not comfortably, to be fair, but we did it. Maybe bank on about 10 to 15 per person, as they are so, so good. I heard from a relatively reliable source just this evening that if you leave the lid off the pan they get super-crispy – I may have to try this way of doing things next time. Because there will be a next time.

February 6th was also the date that the late Bob Marley was born in 1945. It seems fitting that someone who is loved by so many New Zealanders was born on the closest thing we have to a national day. Leaving Tim to make coffee on yet another public holiday, Ange and I went out to Hataitai velodrome to RadioActive One Love, the long-running event that commemorates Marley’s birthday while acknowledging Waitangi Day in a peaceful, musical fashion. The day was unnaturally warm – we really don’t get a lot of sun here in Wellington – and it was the perfect antithesis to the crowds of costumed people staggering drunkenly through town for the NZ International rugby Sevens tournament.

There was constant music, there were people everywhere of all ages and stages, there were amazing food and merchandise stalls, and in an act that seemed to sum up the happiness of the day, Liptons were giving out free iced tea. We saw Don McGlashan, The Midnights, Sola Rosa, Art Official and MC Silva (who gave my peanut butter cookies the thumbs up that very morning, to which I say look out for her album dropping later this year), watched people skanking merrily, ate glorious vegetarian curry, nodded approvingly at the host responsibility announcements, enviously gazed at children on the bouncy castle, bought insence-scented scarves, thought nice things about Bob Marley…magic. I didn’t love all the bottles littering the path on the way out, but other than that it was a seriously ideal way to spend the day. However, I think I’ll be airing out my scarves as I don’t feel quite so positive about the smell of incence as I did when I was 12. Tim and I headed to the Southern Cross later that night for an excellent time watching the Newtown Rocksteady also paying homage to Bob Marley through polished but joyful interpretations of his music, rounding off Waitangi day most satisfactorily.
__________________________________________________
Title brought to you by: Freshmint! the charmingly fey song from Brisbane’s Regurgitator. “Stick with me honey and we’ll go far” feels like a line spoken over and over but slides rather nicely into the celebrity-weary lyrics of this song. I don’t like this band’s name and to be honest this is one of two songs of their I love. I remember hearing this for the first time on Channel Z, being deeply intrigued, but not knowing for months what it was called or who sang it, until the magic of lyrics websites threw me a bone.
__________________________________________________

On Shuffle while I type:

While pondering Regurgitator my thoughts wandered to another elusive Australian song that I used to wait round for, never actually knowing what it was called till years later – Shazam by Spiderbait. It’s all fuzzy and whingy and sounds like a collection of chorusses – great fun, even if the band’s name is also bit gross.

Buffalo Soldier by Bob Marley – just such a great tune. I do enjoy a good bridge and this song enjoys one of the coolest out there.

The Juggernaut, from Andrew Lippa’s The Wild Party, featuring Julia Murney, Taye Diggs, and the teeth-grittingly good use of Idina Menzel’s singing ability towards the end. This musical never made it to Broadway and could perhaps – who knows? – benefit from some tweaks. But it remains special to me for a number of reasons, and the original cast recording ten years on shines with jaw-dropping, brutal talent.
____________________________________________________
Next time: It’s clearly been far too long since I’ve dealt you a heavy-handed reference to RENT in a food-related way, so look out for that next time when, inspired by a culinary lyric in La Vie Boheme, I make rice and beans…