Yikes last week went fast. I most definitely meant to blog sooner but one thing leads to another and all of a sudden it’s a dark Sunday afternoon and I’m pretty convinced it’s time to go to bed but it’s really only just past lunchtime. That’s how you maintain a blog, people! That said, if the week went as quickly for everyone else, then no harm done – we’re all on the same page.

Nothing like rifling through the sepia-d pages of the Edmond’s Cookbook of Mum’s that she gave me to make things feel a little more slow and relaxed. I’ve already made a bunch of crazy marshmallows from this book, but today I felt like something with more practical application to our lives. Not that marshmallows are an unreasonable possession. They have their reasons. 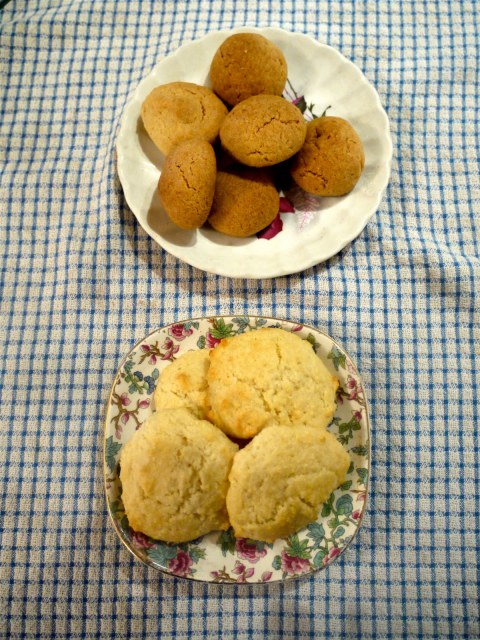 Am I trying to recreate a Frankie magazine photoshoot or what. Except theirs happen on beautiful fabrics and paper and stuff, and mine is on a cheap and grubby teatowel.

I’ve always been a fan of coconut but recently I’ve been really embracing the stuff – I love that it’s so intensely rich and delicious and creamy and fragrant but also very cheap. That said it feels like forever since I’ve had an actual coconut, drank the water from it and bit into the chewy, juicy white flesh (so long ago that I can remember doing it but not where or when or anything…maybe I just dreamed this bit.)

Apparently New Zealanders have loved coconut for generations, although in its most mainstream form it’s really the least appealing – I’m not talking fragrant curries or moist puddings eaten with mangoes or whatever here, I mean the dry, dessicated white flakes that cling to the edges of lamingtons or lolly cake (usually falling off and getting all over everything inbetween being on the plate and getting in your mouth). Nevertheless, as an ingredient dessicated coconut is definitely practical and still gives that definite, beachy flavour, and was recognised as such by several interesting recipes in this pretty old (sorry Mum) Edmonds Cookbook. 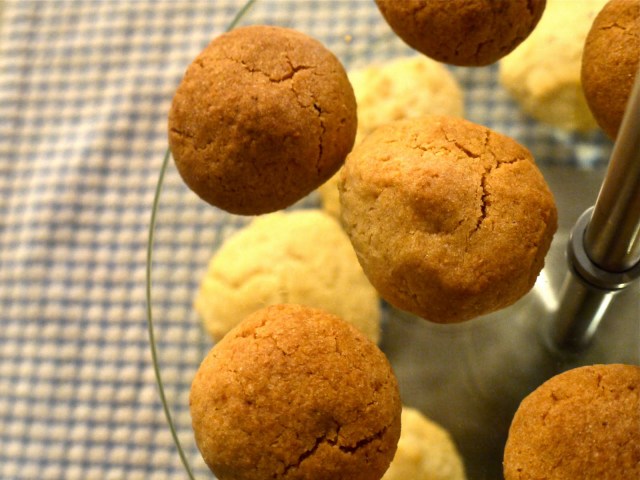 These biscuity biscuits are supposed to be stuck together with butter icing…While I’m seriously the last person that would act as a gatekeeper between butter icing and the rest of the world, I liked the idea of having twice as many biscuits around if I left them alone.

2 tablespoons hot water
1/2 cup sugar
1 cup flour
3/4 cup coconut
1 heaped teaspoon baking powder (you could do as the good book tells you to and use Edmonds)
Note: I added 1/2 a teaspoon Boyajian orange oil, partly for flavour and partly because it was really expensive and I like to pretend like it’s a useful ingredient to have around, I mean it is and all, but, you know.
Melt butter and hot water together (I sat the bowl on top of a small pot of simmering water), mix in the rest of the ingredients. Roll into balls, put on a baking tray and flatten a little (I forgot!) Bake 15 minutes at 180 C/375 F. You can, of course, stick pairs together with butter icing.

Notice the lovely cake stand, given to me for my birthday by my godmother and family!

They don’t look overly exciting but these coconut kisses are in fact mighty delicious – crisp on the outside but meltingly shortbready within. They’d be perfect dunked in a cup of tea as long as you didn’t drop them – they’re pretty small – and they have echoes of several coconut-flavoured biscuits out there on the market except of course they’re way nicer, and much cheaper to make than buy. You could also try using oil instead of the melted butter – I’m sure it would work, and if so: vegan! 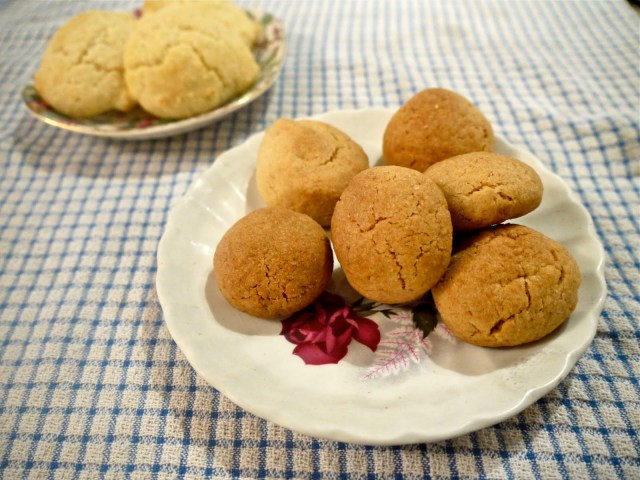 Because one kind of coconut flavoured baked good is just not enough, I also gave the Coconut Cakes a crack. They’re really just small, coconut-enhanced scones, and in fact after eating one, what I really wanted to do was spread them with raspberry jam and sandwich them together with whipped cream.

110g flour
45g butter
30g sugar
60g coconut
1 heaped teaspoon baking powder
1 teacup milk (I used just under 3/4 cup)
Sift flour, rub in butter, stir in the rest of the dry ingredients. Mix to a stiffish dough with the milk. Edmonds says “place in rocky shapes” on your baking tray, I just dropped rough dessertspoons-ful onto the tray and hoped for the best. Bake 15 minutes at 180 C/375 F. 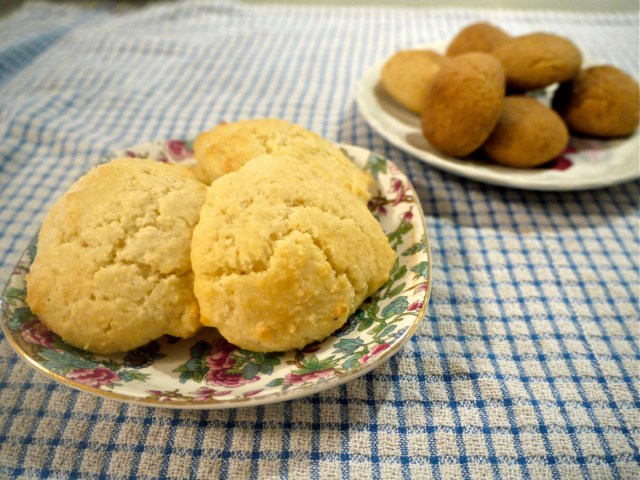 These are so good – really quick to mix up and incredibly tender and light, not a biscuit and not a cake. The coconut makes them flavourous and textural (yeah they’re words!) and they smell amazing while they’re baking. I think you could definitely get away with buttering these before eating (not that I’m the best yardstick to measure healthy buttering behaviour against) or serve with cream and jam as I mentioned earlier, but they’re great just as they are – soft and delicious.

The New Zealand International Film Festival has rolled into town again, replete with cinematic plenty. On Friday night we saw The Illusionist at the prompting of our former-flatmate-current-friend Ange – it was directed by Sylvain Chomet, who also did Triplets of Belleville. It was beautiful, so beautiful but utterly sad and desolate as well. I definitely recommend it all the same, and don’t feel that subtitled films aren’t for you because in fact there is almost no dialogue whatsoever in this film. Just beauty! I also recommend that afterwards you go somewhere warm and drink French red wine and eat homemade chocolate macaroons, it definitely worked out well for us.
____________________________________________________
Title via: okay, all this coconut talk made me think of a certain coconut liqueur, and like all good songs named after an object or a person or something, the very thought of it had me humming Hole’s wonderful 1998 song Malibu and now here we are. Of course, I’ve already outlined my enjoyment of Courtney Love previously here…
____________________________________________________
Music lately:
I Heart Nigella by Wellington band Mammal Airlines. Tim and myself interviewed them recently for our website 100s and 1000s (please excuse the insultingly bad quality of the video, we’re getting there, we are…) and the three of them were awesomely nice and fun to talk to. But perhaps most awesomely nice of all is the fact that they have a song called I Heart Nigella, and what’s more, it’s really good. They’ve made both their EPs available for free download, so take advantage of that generosity, hey?
This Song Has No Title from Elton John’s Goodbye Yellow Brick Road. I know Elton John has an electric boot planted firmly in the middle of the road these days but I have no fear in saying I love this album. The reason it’s on my mind though is because Tim put it on the stereo and managed to trick me into thinking we were listening to War of the Worlds, which I really hate. I was getting pretty aggravated until album opener Funeral For A Friend/Love Lies Bleeding dropped speed and changed tempo and all of a sudden I realised we were actually listening to Elton John. Now we sound like incredibly unexciting people, but it’s a true story and you heard it here first.
__________________________________________________
Next time: I made ceviche for the first time and it was so good! Not so good was my pronunciation. Even though Nigella was all “it’s Mexican!” I’ve been pronouncing it all French-like, “se-veesh”…

11 thoughts on “go and part the seas in malibu”