November 2, 2010March 11, 2020
I’ve got about a squillion things to get done tonight (including “make your own muesli” “watch the rest of The Simpsons season 4” “PACK YOUR BAG ALREADY” and “have an early night so you can get better”) because I’m flying up to Auckland for a conference for the next three days…and I’ve been annoyingly sick for ages now, a rotating cast of germs is using my body as a stage, with coughing, sneezing, headaches, feeling weak and insomnia all starring. So to get it crossed off the list I’m trying to make this post relatively succinct. I don’t even know what the word for this is but I’m also trying to avoid that situation where I’ll write a sentence then delete half of it then rewrite it then delete it all and repeat that over again till I suspect I have actually got no thoughts at all about the soup.
The soup in question, luckily, stirs up heaps of thoughts, even though it’s more or less just corn and capsicums and water. For all that Nigella Lawson barely has to murmer an item’s name to send armies of viewers hunting tirelessly through supermarkets for pomegranates and sugar roses and and tiny whisks (surprisingly useful), hot damn does she have some economically and nutritiously sound recipes.

I love corn in all its various alter egos, from the canned creamed corn on toast that was a regular weekend breakfast as a kid, to the softest polenta (where I’ll amuse myself by feeding it with butter which melts into the grains – both yellow, so it’s deliciously difficult to notice the saturation point). Corn fritters can be stodgy and damp and gross, but done well it’s easy to see how they managed to become as ubiquitous as camembert and cranberry paninis (now that I never liked) in cafe cabinets. I don’t think I’d ever really had corn soup before, but I wish I’d had this recipe a few years back when Tim and I were trying to scrape together an existence while scraping the mould off our student flat’s walls as it’s a cheap, nutritious and satisfying meal (let’s be honest though, we sent ourselves off to university, no-one forced that pennilessness on our relatively comfortable lives). Not to mention this soup is aggressively cheerful to look at, if you subconsciously associate ‘yellow’ with ‘happiness’ like I guess I must do. Well, Nigella does it too, calling this ‘Sunshine Soup’.

From Nigella Lawson’s Kitchen
1 yellow pepper
1 orange pepper
2 teaspoons garlic oil
1 litre vegetable or chicken stock, whether homemade, powder, cube or concentrate, preferably decent stuff
500g frozen sweetcorn kernels
Set your oven to 250 C. Cut out the core and seeds from the peppers and then slice thickly. Lay them on a baking sheet, drizzle with the oil and roast for about 20 minutes.
Meanwhile, bring the stock to the boil, add the corn and bring back to the boil again, simmering for about 20 minutes.
Remove about half a cupful of corn for later, then blitz the rest, in batches if necessary, along with the peppers in a food processor. Serve with the reserved corn stirred back into it. 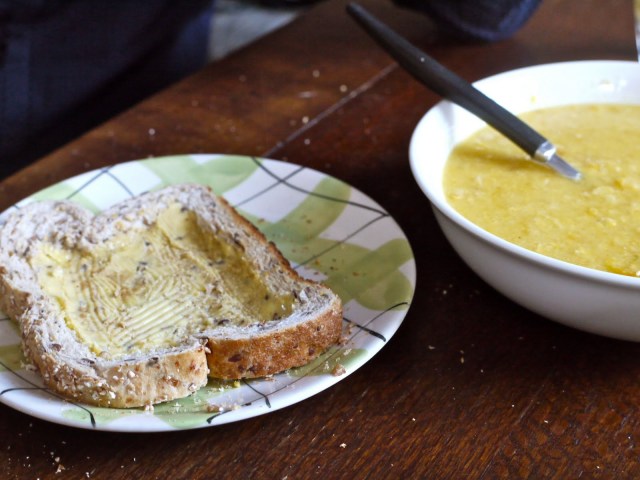 7 thoughts on “sunshine is a friend of mine…”

Leave a Reply to Helen (Grab Your Fork) Cancel reply