I don’t know why, or how to explain this in a straightforward way, but if there’s a recipe for a cake with an ingredient that wouldn’t normally be in a cake, I’ll really, really want to make it. Which is why I got my cake on immediately after finding the Beetroot Cake recipe, the Kumara Cake recipe, and…digging into the 2007 archives before I committed to a lyrical pun for every title…Chocolate Chickpea Cake (No lie. Chickpeas.) If it has a vegetable or similar trying to disguise itself as a cake – bring it on.

And then I found a recipe for a cake with mayonnaise in it. In a way it sounded familiar, like I’d heard of this combination before. But till now an actual recipe has never appeared to me, in fact it wasn’t even something I was actively searching for. Then I was reading the new issue of Spasifik magazine, and there was an advertisement for Best Foods Mayonnaise with a recipe for Amazing Cake Pasifika, sent in by the staff of the Glenn Innes Library. And it all made sense. I had to try it. Especially with an awesome title like that, as someone slightly given to hyperbole, I like a cake that announces itself as Amazing before you even try it. 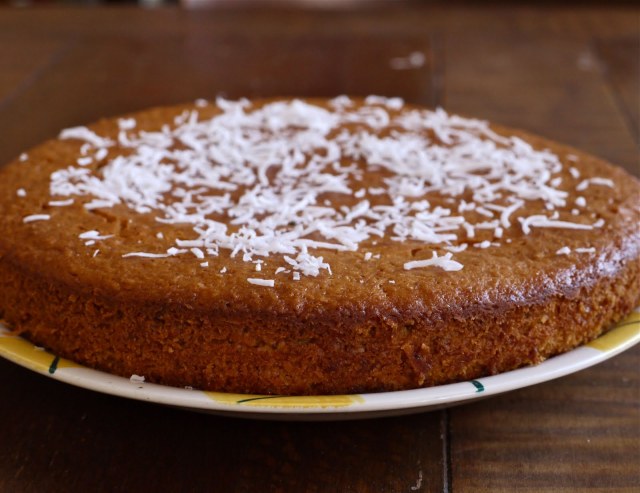 When you think on it, mayonnaise in a cake isn’t so spooky after all. It’s more or less just eggs (or egg yolks), oil and vinegar – all things that help give a cake its cakeyness. Just don’t use aioli by mistake…and maybe check how high stuff like mustard appears on the list of ingredients while you’re at it… 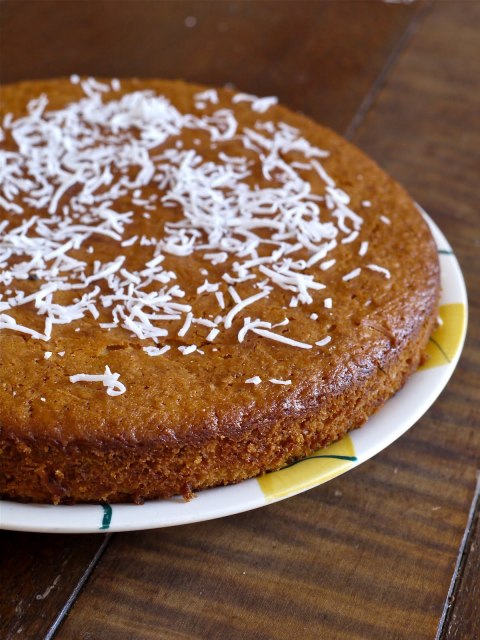 Amazing Cake Pasifika
With gratitude to the Glen Innes Library Staff (if there’s any GI locals reading this, feel free to give your library staff a high five for me) and Spasifik Magazine.
Original recipe here.
1 cup Best Foods mayonnaise (if you don’t have that, then use some other decent mayo)
1 cup brown sugar, packed in
1 cup orange juice
1 cup coconut (desiccated is all good, but I saw “fancy shred” at the supermarket and was drawn to it…if I ever became a DJ – don’t worry, I won’t – DJ Fancy Shred could definitely be my pseudonym)
1 1/2 cups self raising flour
1 tablespoon ground ginger
1 teaspoon cinnamon
Set your oven to 180 C/350 F. In a good sized bowl, whisk together the mayo, brown sugar, and orange juice. I will tell you now…it tastes kinda good. Mix in the rest of the ingredients and pour – it’ll be a fairly liquid batter – into a lined, greased 22-ish cm caketin. Bake for 45 minutes or so. The recipe suggests a lemon cream cheese icing (yum) but I just sprinkled it with more coconut (which looked pretty but fell off as soon as I cut into the cake…so. Stupid fancy shred.) 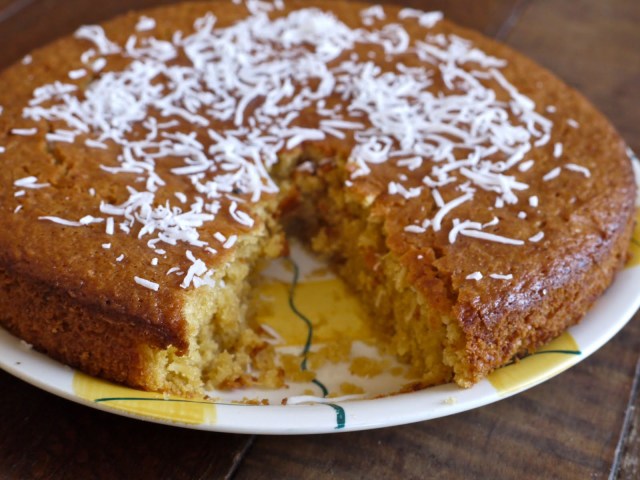 I guess it was something in the mayo, but this cake is incredibly moist, soft and light. Not actually so great for cutting into as you can see from the photo below – the slices would droop a bit and fall apart if handled too aggressively, but despite this it’s exactly the sort of thing you want to have if family or friends drop in on you – a big crowd-pleaser of a cake. You can even use it as a conversation starter if things start to get awkward (“hey, guess what the secret ingredient in this cake is?) Between the orange, coconut and the spices it might sound kind of aggressively flavoured but it wasn’t – just fragrantly delicious with an amazing golden colour.
And can you even taste the mayonnaise? Nahhhh (well a tiny bit. But only if you concentrate. The cake’s delicious, so if you can’t deal with mayonnaise in it then all the more for me, but if it helps, just remember the separate ingredients: egg, oil, vinegar.) 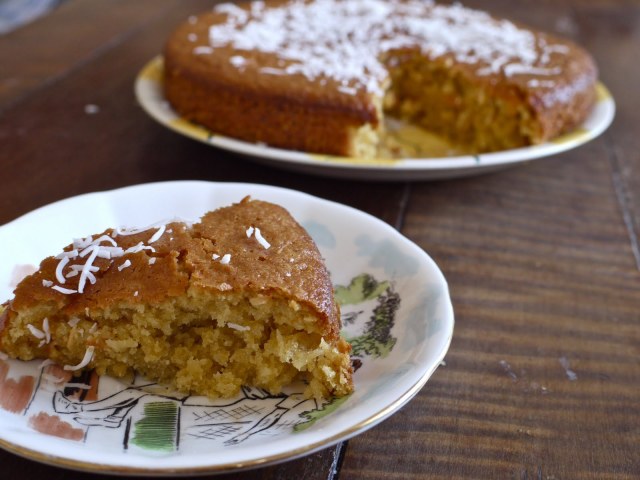 Tim’s down in Christchurch this weekend to see the Wellington Phoenix (starting to suspect that it’s Phoenix here *hold hand high* Laura here *hold hand less high*) and luckily they won – I was following the scoring on Twitter while writing this and it seemed like there was some kind of red card situation and…actually I’m not the best person to explain this. I’ve had an awesome weekend on my own – the weather was incredible on Saturday, I ate a whole eggplant for dinner tonight (Tim hates them), I did a yoga class, had a Christine Ebersole youtube marathon, and last night caught up with ex-flatmate but not ex-friend, Ange.
On Friday night Tim and I went to the Wellingtonista Awards at the mighty Mighty Mighty bar and…I didn’t win! I really wanted to but in the end it’s all good. It was fun just to be nominated, especially because I had no idea it was coming, and we had a seriously good night all the same. The crowded nature of the place – I was perched on a beer crate because there were no chairs left – meant we ended up getting practically on first name basis (if we’d thought to ask their names) with the sassy ladies of Wellington On A Plate who were next to us – at first it was all “we’ll cheer for you if you cheer for us” but suddenly we were rejoicing in each others raffle ticket victories and consoling (“it’s great just to be nominated”) each other’s respective non-wins.
We also ran into the lovely Anna Dean from Tiger Translate and Kate from Lovelorn Unicorn and tried to be cute in the super fun Amazing Travelling Photobooth. Good times all round. On top of that we won a Grow From Here voucher and a night tour of the Zealandia sanctuary (kiwis!!) from the raffle, so we didn’t even go home empty handed. A massive massive thanks to everyone who voted – I realise there’s been a bit of “vote for me! Please! Oh sorry I didn’t even win” highs and lows this year but I really, really appreciate it.
________________________________________
Title via: Ate The Cake I Had, from the 2006 musical Grey Gardens. I’m sure there’s probably some mayonnaise lyric out there but I’m on the most humungous Grey Gardens kick these days (see: Christine Ebersole below) so it’s all good.
________________________________________
Music lately:
ChakaKhanletmerockyouletmerockyouChakaKhan. On Saturday morning Tim and I grabbed I Feel For You on vinyl from Slow Boat (with “Happy Christmas, Annie” written in ballpoint across the front, did you just write on your album sleeves back then or something?) and I love the title track so much. And also Chaka Khan’s hair.
Christine Ebersole‘s entire back catalogue – a brief but dazzling intro here on 100sand1000s.
Mariah Carey’s Oh Santa from Merry Christmas II You. It cracked me up how the sticker on the CD claimed it was her new Christmas classic, but to be fair: it’s awesome. It maintains its upward bounce and has some minor key action and it’s extremely catchy and happy without trying to be All I Want For Christmas Is You. Love it.
__________________________________________
Next time: a couple of interesting new vegetable dishes I’ve tried out lately…

10 thoughts on “what good is cake you have but never eat?”