After a brief survey of four people (one of which was myself) I’d like to make the sweeping generalisation that Brussels sprouts are a bit like Elphaba, the Wicked Witch of the West: green, and misunderstood. So misunderstood. None of us could remember ever eating them in our childhood, but there was definitely the feeling that it was not a vegetable to welcome with open arms. Yes, plenty of people here in New Zealand must’ve eaten them, overboiled and sulphuric balls of punishment on the dinnerplate, but I can only hypothesise, or whatever comes at this stage of a scientific study, that pop culture has influenced a lot of my suspicion. Same reason I made my own earrings out of shells and beads and then wore them, sincerely. The Baby Sitters Club. I’m not saying that series of books is everyone’s reason for disliking on impact the Brussels Sprout, but I’m pretty sure it’s my reason. (Not that I can, admittedly, name a specific example, but I know it’s there.) 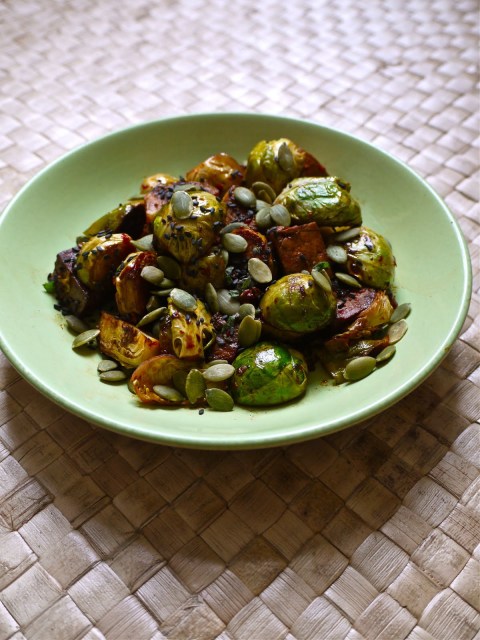 Anyway, I saw this recipe in Plenty, my Yotam Ottolenghi cookbook, called “Brussels Sprouts and Tofu”. And I thought, oh really? A plucky move, pitting two generally disliked ingredients against each other in one dish and working to stop the competition between them to see which can make the eater unhappy first. Now I love tofu, but this is not a sexy recipe title. Yet its bold simplicity appealed to me, as did the fact that brussels sprouts were very, very cheap at the vege market.
And if anyone knows how to de-misunderstand brussels sprouts, it’s Yotam Ottolenghi. He who pairs eggs with yoghurt and chilli and garlic with more garlic.
Interestingly the ingredients are very simple – the three main givers of flavour are chilli, sesame oil and soy sauce. For me, what seems important is the cooking methods: for the sprouts, you fry them till they’re browned and scorched in places. For the tofu, you marinate it while you’re getting everything else ready, then fry it up till the marinade is caramelised. You could probably do this to any kind of food and it would taste good, but here the ingredients really open up, come alive, I want to say snuggle into the flavour but that feels wrong…anyway, the sprouts become crunchy and juicy, their peppery flavour amplified by the smoky scorching. The tofu is salty and dense, with a crisp edge, its mildness subverted by the chilli.

This isn’t just ‘not bad…for Brussels sprouts and tofu’, any food would hope to taste this good! I served it on soba noodles, but it would be great on rice or alongside something else, or just as is. If tofu is nay your thing, the sprouts on their own would also make a fantastic side dish to a bigger meal. Seriously, I had to stop myself eating them all before returning them to the saucepan with the tofu. They’re good. At last.
Brussels Sprouts and Tofu

Adapted from Yotam Ottolenghi’s Plenty. There are mushrooms in the original recipe but as Tim’s unfortunately not a fan I thought it’d be a bit harsh to leave them in along with everything else.
2 tablespoons sweet chilli sauce
1 1/2 tablespoons soy sauce
3 tablespoons sesame oil (I reduced this to 1…sesame oil is expensive!)
1 teaspoon rice vinegar (I didn’t have any, used balsamic vinegar, worked a treat)
1 tablespoon maple syrup (I only had golden syrup, likewise was great)
150g firm tofu
500g Brussel sprouts
Mint, coriander, sesame seeds and (optional) toasted pumpkin seeds to serve

Whisk together the chilli sauce, soy sauce, sesame oil, vinegar and syrup, then chop the tofu into cubes and add them to the bowl. Set aside while you get on with the next step.

Trim the bases off the brussel sprouts and remove any flappy excess leaves. This’ll probably take a while. I slightly misunderstood the instructions on how to slice them but I don’t think it matters – Ottolenghi requests thick slices from top to bottom but I just sliced them roughly into quarters.

Heat about 2 tablespoons plain oil in a pan, and once it’s properly hot, add half the sprouts and a little salt. It’s good to turn them round so that a flat surface is touching the bottom of the pan, but it’s no biggie. Leave them for a couple of minutes – don’t stir them if you can help it, but they won’t take long to cook through. When the sides touching the pan are a deep brown, set them aside and repeat with the rest of the sprouts. Remove them all from the pan, and carefully – using tongs is good – transfer the pieces of tofu from the bowl of marinade to a single layer in the hot pan. The marinade may splutter and sizzle a little at this point. Reduce the heat, cook the tofu for about two minutes a side till caramelised and crisp.

Remove the pan from the heat and immediately throw in the rest of the marinade, plus the sprouts. You’re supposed to garnish it with coriander, but I had none, and only a tiny bit of mint – so in the interest of visual interest, I toasted some pumpkin seeds and scattered them across – pretty and delicious.