The brain does many strange things, one of which is the way songs can get stuck in it, without reason or end. If stereos were the size of tic tacs, it’d make sense. “Oh, that’s why I keep hearing that song! My boombox got stuck in my ponytail again! Ha ha ha!” But this is not the case. It’s just the brain. For example: last weekend when Tim was away in Taihape, one song got itself persistently in my mind, repeating itself with an alarming stamina. 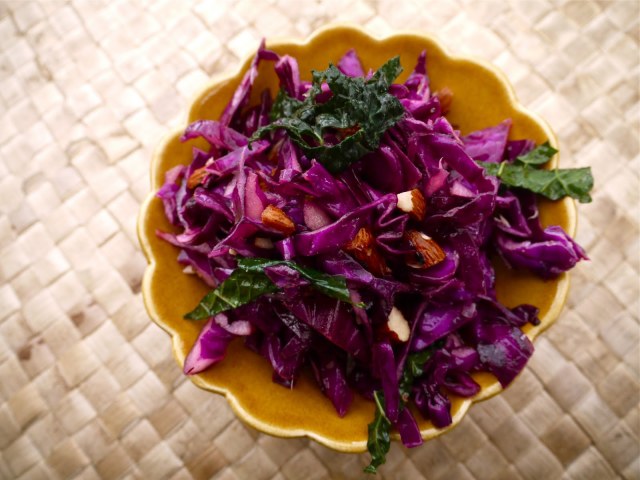 Basically I just couldn’t bear that (bear!) alone, but it does lead into my next point: sometimes recipes do this to me too. The ingredients list curls around my inquisitive mental imaging faculties, lodging there fairly permanently till I can find the time to bring the recipe into existence. Luckily for me, the most recent time this happened, I didn’t have to wait too long. On Friday night Tim and I went to the house of of the terrific Kate and Jason for an evening of ceaseless hilarity and sustained deliciousness – homemade cheese, sublime sweet potato pie with a lattice top, polenta, spicy soup, soft dinner rolls filled with fried tomato slices and the crispest bacon – and several of these recipes came from a particular book called Simple Fresh Southern by these guys called The Lee Brothers. I wanted the recipe for the cheese but Kate talked me into taking home the whole book to borrow, and I am so glad, because the moment I flipped it open (wait – the moment the wine wore off and I flipped it open) and made eyes with their Cabbage and Lime Salad with Roasted Peanuts recipe, I knew I had to make it my own. And then all the rest of their recipes. This book is so cool. 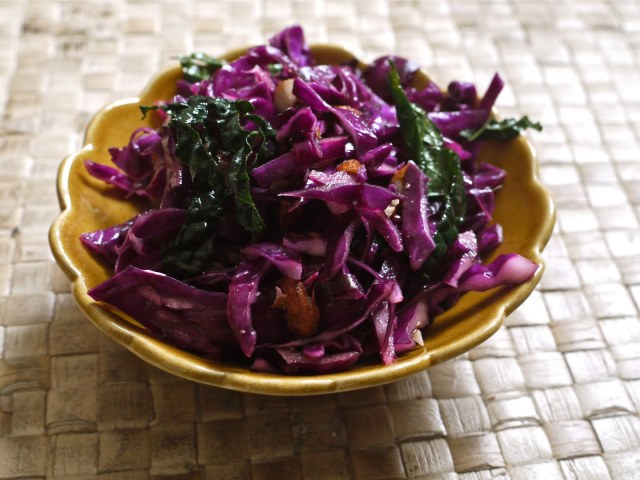 I agree with you entirely that a salad based on cabbage might sound severe and unsexy and like the very last sort of thing you want to eat in winter when there are casseroles and puddings to be had. But after a few nights out enjoying abundant food and wine and with more such evenings on the nearing horizon, I honestly do just want to bury my face in a cool, astringent, mustardy salad with bursts of citrus sourness.
Besides, the crisp peppery shredded cabbage, tart lime segments and hot mustard are mellowed out considerably by all the salt, the oil in the dressing, and the creamy bite of the roasted nuts. You could serve it with fish, chicken, a dirty great big steak, with rice noodles under or stirred into it, and so on. Or even on the side of a big slow-cooked casserole with a hearty pudding to follow.
Cabbage and Lime Salad with Roasted Peanuts

From Simple Fresh Southern by the Lee Brothers

The recipe says to toss the cabbage with the salt, then sit it in a colander over a bowl for two hours so that lots of liquid can drain out. But honestly, not a drop of water was in the bowl after two hours. Maybe our cabbages are different here in New Zealand? You do as you please. Otherwise, mix together all the leaves in a large bowl. Trim the ends off the lime and peel it, then carefully slice it into segments, peeling off the membrane where you can, and tear these segments into small pieces. Toss them into the leaves too.
Whisk together the rest of the ingredients to make the dressing, and thoroughly mix this into the salad, and finally stir through the chopped nuts. Serve!
Note to yourself: I used just purple cabbage since I’m only feeding the two of us, I used cavolo nero instead of spinach and almonds instead of peanuts since that’s what I had, and if you get a bit stuck you could use lemons instead of limes and wasabi paste instead of mustard. 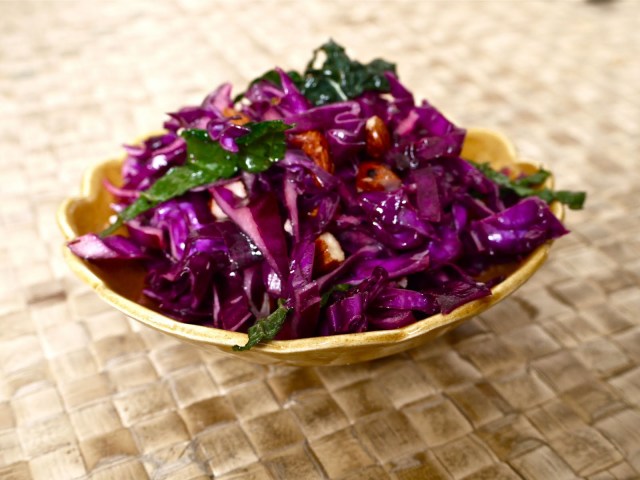 This salad is punchily delicious, awakening you from any wintery downtrodden-ness with every drop of lime juice you absorb. It’s also very pretty to look at, with its queenly purple and green gemstone colours. 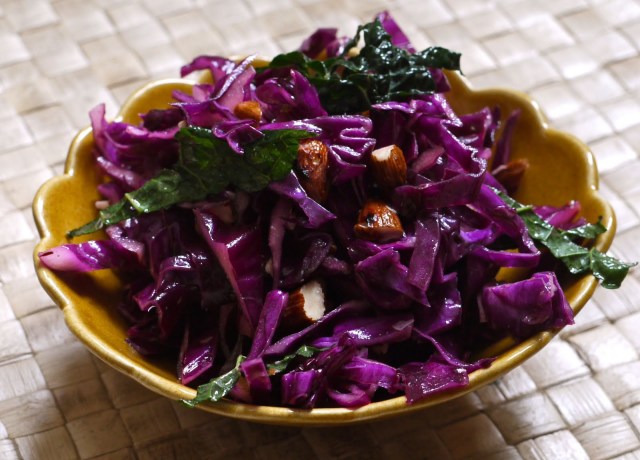 (I mean fairytale queen, not the actual Queen of England – that would have to be a more pastel-toned salad.) (Also: I got the pretty, pretty bowl in a moment of sale-induced single-mindedness from Swonderful.)
As if Tim and I making friends and eating their food isn’t enough excitement, this afternoon in Wellington it started SNOWING. It hasn’t snowed in Wellington since 1995! Honestly, when I was a kid I didn’t know that it snowed anywhere in New Zealand but that’s because I grew up south of Auckland, not really within cooee of a snow-capped mountain. In the CBD where we live it was more rainy than snowy and it didn’t really settle but there was an unmistakable icing-sugar dusting of snowflakes in the air and it was thrilling.
____________________________________________________________
Title via: yes I’ve used this song before as a title holder but not in this way and besides, I’m very tired (just in case anyone’s watching closely.) I love the Dead Kennedy’s version of this which changes it to “and I won” but it’s hard to go past Buddy Holly and The Crickets’ singing that the Law did in fact win, which must’ve been fairly reassuring to the nervously suspicious adults of the time.
____________________________________________________________
Music lately:
Tim and I saw the stunning movie Pina tonight, which luckily gives as much attention to sound as it does visuals. Shake It is one such example of its glorious music.
Speaking of Tim, being the diamond that he is, he bought me a Judy Garland and Liza Minelli live record and I love it. It’s them at the London Palladium in the early sixties, and they’re quite adorable, given the often distinctly non-adorable circumstances of Garland’s life. Their personalised take on Hello, Dolly is very sweet and shows off how good their similar voices sound together.
______________________________________________________
Next time: Well I’ve loaded up on buttermilk to attempt more of the recipes in the Lee Brothers’ gorgeous book, and at the prompting of excellent lady Jo both via email and in person, since we were fortunate enough to see her twice this week, I’ll most definitely be pondering cupcakes for the SPCA Cupcake Day too…

13 thoughts on “i fought the slaw and the slaw won”