Fun to have up your sleeve: a super delicious cake recipe which can be easily made to look disproportionately spectacular in relation to the effort that went into it.

Not so fun to have up your sleeve: actual cake. Crumbly enough to make your elbows itch and move round everywhere as you try and shake it out, sticky enough to really winkle itself permanently into the fibres of the fabric. 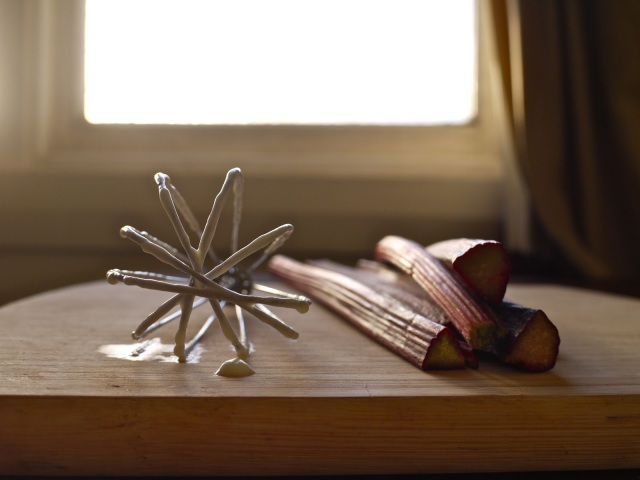 Consider how many times a day that you blink your eyes. That’s probably how often I think about cake. Well, if I’m being realistic, that’s probably how often I’m thinking about all food, as opposed to cake specifically. While you’re blinking, I’m blinking and thinking about food…ing. In this case, I found some lipstick-pink rhubarb sticks at the vege market last week and had a vision of simmering them up and having them dripping out from the layers of a cake. I had a whole lot of sour cream leftover from another recipe, and so I mentally inserted that into the layers with the rhubarb. And then I thought, what if it was a bundt cake? How cool would that look? All diagonal and undulating and with a veneer of intimidation?

Pretty cool, yes indeed. Could almost walk away right now and let the cake speak for itself. Except that would be an ineffectual blog post, and also the cake would probably say, in a spongy voice “errr, look over there at that…pikelet. Way more appealing than my regal, creamy body.” And then the cake would quietly shuffle off to a hiding place.
My grand visions don’t work out the way I hope they will (this goes for dinners, clothing, and judging when it’s the right time to say “that’s what she said”) so it’s most definitely enpleasening and good for the soul when it does. But if you need some convincing as to why you should try making this full-on cake, consider the following:
1) It looks awesomely ridiculous and ridiculously awesome.
2) It’s way easier to make than its outward appearance would suggest.
3) Without the filling, the cake is both vegan and delicious.

While you’re considering that, you could maybe consider considering another cake worth your consideration: Nigella Lawson’s Chocolate Guinness Cake, which was the subject of my most recent cooking tutorial video on YouTube.

All the cakes! The Guinness cake was the reason I bought all that sour cream, by the way. Not that it needs a lot, but subconsciously I would’ve reached for the bigger amount at the supermarket so that I could have leftovers to use in another baking caper. I’ve got another video about bread on the make, but I’m waiting for this one to climb in views before I upload it (also it needs some severe editing, would you believe I could talk about bread for A WHOLE HOUR and I was aiming for a six-minute clip.)

Back to this cake: the only bit where you really have to tap into your concentration faculties is when slicing it into layers, but even that’s simple enough: just use your sharpest knife, go slowly, stop often to make sure it’s staying even, then slide some baking paper underneath the layer you’re slicing and lift it off. Onto the next one.

Despite sandwiching this together with sour cream wrought from the milk of the nation’s finest cows, my eye was caught by this vegan recipe, which harnesses the awesome power of coconut milk and not much else and turns it into a cake most delicious. The website that I found it on is fairly confusing but the recipe itself is sound as a pound.
Coconut Lemon Rhubarb Brown Sugar Sour Cream Layer Bundt

Working on that title. But if I left something out…recipe adapted from this site here.


Whisk together the sugar, oil, coconut milk, lemon juice and zest. Sift together the dry ingredients – super important that you don’t have any lumps here or the whole cake will taste like baking soda. Whisk the flour in till you’ve got a thick batter, scrape it into the cake tin and bake for around an hour.

‘Fraid I didn’t actually weigh out the amount necessary but it was two decent-sized bunches of rhubarb, trimmed and chopped into short sticks, brought to a slow simmer in a pan with about 1/2 a cup of sugar (seriously, I’m sorry I chose this moment to be all instinctive and not record amounts.) Cook away, stirring often, till the fruit has mostly collapsed and softened. Allow to cool. Mix together 1 cup of sour cream (I used delicious Tatua stuff) together with 3 tablespoons of brown sugar. Cut the cake into two or three slices as per my instructions up there, then carefully spoon sour cream onto the bottom layer – less than you’d think and not all the way to the edge, as the weight of the next two layers pushes it out – and then spoon over some rhubarb. Carefully lift the next layer of cake and slide it off the baking paper and on top of the bottom layer. Repeat, finish with the top layer, dust with icing sugar if you like. 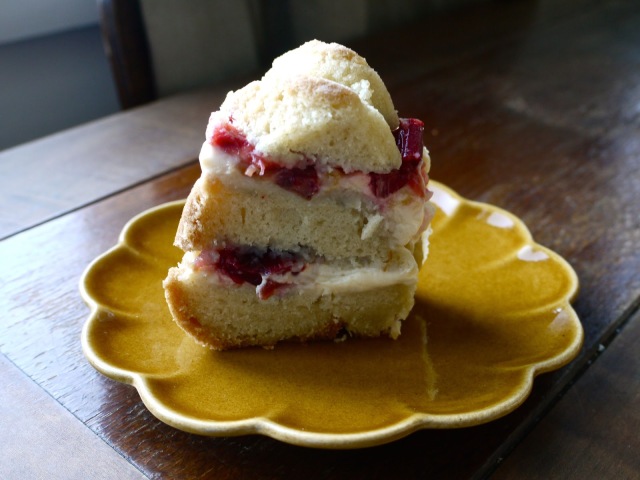 Whether or not you see all that as a lot of effort or not, this is delicious either way and encompassing all kinds of delicious flavours and textures: the double sour-sweet of the softly fibrous rhubarb melting into the cool, satiny sour cream. Squidgily creamy, sweet with coconut and pure sugar, sharply spiked with rhubarb and lemon, pink and golden like a decent sunrise, and tall as a house the size of a cake.
On Saturday I fed the cake to our top-notch friend Jo (well, she fed herself, but I passed the cake to her on a plate) and to myself before we went for a flounce round Petone, being fed truffled brie at Cultured, buying fizzy Limca drink, coriander seeds, mustard, and other food trinkets, browsing the treasures at Wanda Harland, and checking out the goods at the A La Mode relaunch, before driving back to the city to weigh up the whys and why-nots of buying whipped cream flavoured vodka (verdict: I want to try and make my own instead, but how??) All of which makes it sound like I’m some kind of obnoxiously frolicky blogger who runs around in a haze of pink-tinged high-contrast photos, but it’s all in the framing. Am mostly grumpy nervous and opportunistic, as opposed to the kind of carefree imagery this might’ve served up. Also: truffled brie is incredible stuff. Just enough of too much of a good thing, you know?
_______________________________________________________________
Title via: Cat Stevens, proving his use to my blog once again. Matthew and Son is my very, very favourite song of his and I think I talk about this amazing video of him singing it at least once a week but if you haven’t watched it…do.
_______________________________________________________________
Music lately:
Somehow a lot of time has gone by since I last had a proper wallow in some Julia Murney singing excellence. And then I realised, it’s because she’s just so, so good that if I watch too much it mucks with my brain and I get all miserable that I’ll never get to see her live and so on and so forth. Long story short, her rendition of Nobody’s Side from Chess is spectacular.
Soul II Soul, Back to Life. (“back tooo reality…”)
_______________________________________________________________
Next time: I still have this chilli sauce recipe that I want to make, however I also had this pear sorbet idea which I haven’t had time to execute, but maybe if I train my body and mind to thrive on a quarter of the sleep I get currently.

16 thoughts on “that’s all you take, for a cup of cold coffee and a piece of cake”