But first a BIG thank you, as big as the words Thank You made out of colourful rubber and inflated to the size of a forty-foot building, with a noble capybara balancing on top of it looking thoughtfully into the distance, for all the nice comments and emails about my last blog post. From the bottom of my chocolate-iced heart.

Back to avocados; aren’t they exciting? Like nature’s version of rich creamery butter, kept in an endearingly curvaceous, bumpy casing. Nutty and smooth and yes, buttery, I love it mashed into guacamole to be scooped up with corn chips, spread on toast for a breakfast treat anytime of day, or sliced into a bowl of salad so that you can try and surreptitiously dig for it all with the spoons when serving yourself.

But to turn them into pudding? Inconceivable! 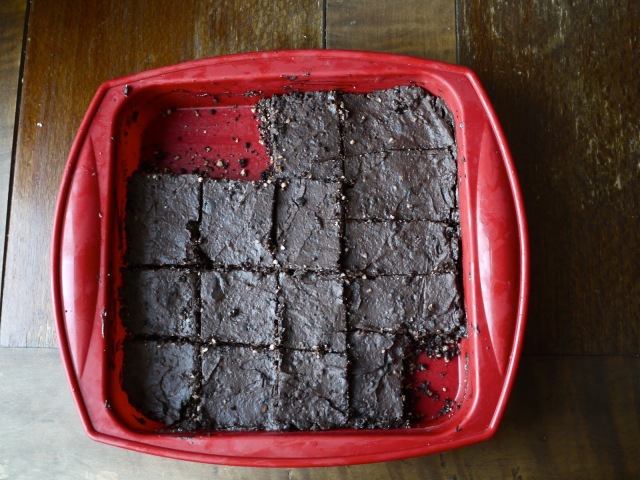 Conceive of this. I know I go on about Hannah at Wayfaring Chocolate a fair bit, so I’ll try and squash down the enthusiasm a little here so I don’t sound like some kind of creepy person who waits outside your window and cries “the hunter has become the hunted!” No, it’s not like that. It’s just that she’s got one of my favourite food blogs in the world, is all. And while I’ve heard of using avocados in non-savoury recipes, it was she who prised open my eyes to how delicious and non-threatening it could be. Through the medium of raw vegan brownies. Regular baked brownies have their place (and that place is a table marked “DELICIOUS THINGS HERE, PLEASE”) but it’s fun to push the limits of creativity in the kitchen sometimes by restricting your parameters. Which is what Hannah did with this amazingly delicious recipe.

Yes, those are useless-ish stripy novelty straws: they make my heart soar, and what price soaring? Occasionally I buy into pretty things, and occasionally…I literally buy them. Treat yo’self.
A daring mixture of dates and nuts are whizzed up in a food processor with cocoa to form the base, and then the power of a whole avocado is harnessed to create the icing. It’s amazing – you add golden syrup and cocoa and suddenly it turns into this creamy, darkly chocolatey, shiny ganache-like substance.
Unfortunately when I busted anticipationally into the avocado it wasn’t entirely usable – instead of two bowl-like halves offering up smooth, unbroken greenness, there were significant portions that were bruised and horribly stringy. I scooped out what was salvageable, and this is why the layer of icing on my brownies is sadly thin. But another time, another avocado.
Raw Vegan Chocolate Brownies with Spectacular Avocado Icing
Adapted slightly, and respectfully, from Hannah’s recipe which she adapted from another recipe of her own anyway: inception! Feel free however to just click through to hers.
2 cups nuts: I used a mixture of almonds and pecans, but near-on anything would suit.
2 cups dates, roughly sliced
1/3 cup cocoa powder
Blend the living heck out of these ingredients in a food processor. It may take some time to come together. Eventually it will be a fine-ish, crumbly mixture of tiny ingredient particles. Turn it out into a baking dish, roughly 20cm square or a little bigger or smaller. Press down on it with a spoon, freeze while you make the icing.

1 ripe, perfect avocado
2 tablespoons golden syrup
2 tablespoons cocoa
2 teaspoons vanilla extract (optional, by which I mean I forgot)
Small pinch of salt
Thoroughly clean out your food processor, then blend all of the above till smooth and shiny and amazing. Add more of anything to taste, then spread evenly across the base. Return to the freezer, slice once ‘set’.

I admit: I had issues making this. I increased the base quantities a bit from Hannah’s recipe and I don’t know if it was because of that, but the food processor just Would. Not. Break. Them. Down. Rather than being sliced up, it was like the blades were some kind of carnival ride for the dates and nuts to scoot round on. I’d be processing the heck out of it, take the lid off, look in: perfect, whole almonds and dates. Stir it round, repeat. Look in: perfect, unblemished nuts and dates. So confusing. I’m not sure if I should’ve soaked the dates first or something but eventually, eventually, they started to break down. This is why I recommend you chop them first.

But despite that, as long as you own a food processor these are a complete breeze to make, and even though I’ve only eaten a few pieces I know I’m going to make this again, and often. For one thing, to get a better quantity of icing. For another thing, to try out all the different flavours (except carob, I can’t go for that) like having maple syrup in the icing or walnuts in the base. This is incredibly delicious stuff – a little crumbly, although I suspect that’s my own fault – but caramelly and dark and biscuity and cold and wonderful. Something about the texture of the dates and the intensity of the cocoa makes it taste and feel almost like solid chocolate. And the icing – oh my. Even with the mean scraping of it across the top it’s almost aggressively luscious, showing how avocados in sweet things makes total sense – the buttery flavour, its yielding texture, and whipped-cream body. And they’re vegan and gluten-free! (Well I’m not sure if golden syrup is strictly vegan, but it seems to be…if not, just use maple syrup as per her recipe.) 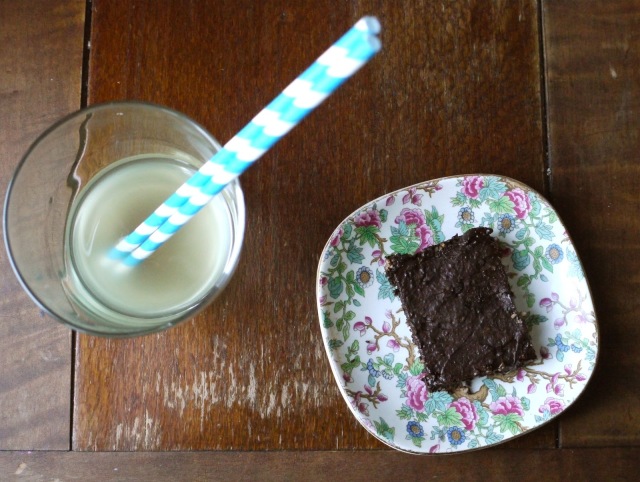 Thanks Hannah – and I urge you to run, not walk, to her blog and read through all the other good things she’s come up with.

What have we been up to lately, apart from eating all this brownie? Went to the SPCA to drop off some newspapers but also to hang out with the beautiful cats and dogs there for a bit – seriously, I want them all. Baddddd. Words can only hint at how cool the cats were and at the depths of love in the dogs’ eyes. I just wish we had the space! We were a little slow-moving that day though because what started off as a spontaneous BYO dinner to toast Jo’s job success on the previous night had escalated into a spontaneous-er wingding at our place. On Sunday I went with Tim to the Wellington Phoenix’s first football game of the season (The Pheen, as I call them, but it doesn’t seem to be catching on). It almost didn’t happen – the internet cafe I usually go to was inexplicably full, then when I finally found another one my e-ticket refused to print for ages. The upshot of it was that arriving late to the stadium meant I didn’t suffer that mid-point slump – as I really don’t like sports in the first place, my attention span is not cut out for ninety minutes of people running round kicking a ball. Anyway, they won, which was super pleasant. Hooray for weekends.
_______________________________________________________
Title via: The laconic and shambling but nonetheless exciting Pablo Picasso, by the Modern Lovers. LOVE this band. Not least for the fact that they use the word avocado in this song.
_______________________________________________________

Shout, Isley Brothers. I know I say this about so many songs, but this has just got to be one of the best songs in the world. It’s beautiful.