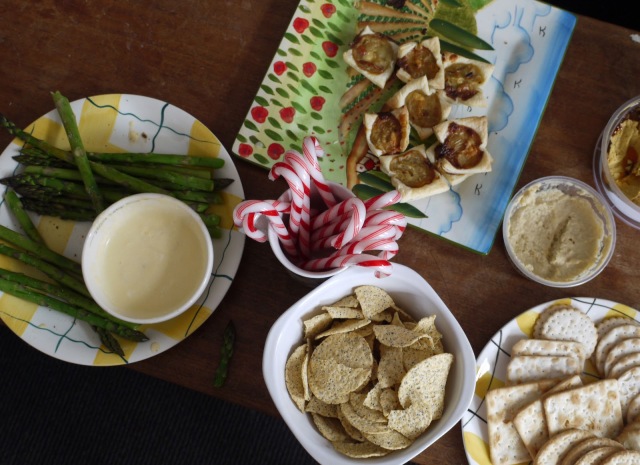 Christmas christmas christm- I’m just kidding. But it is upon us once more. Which means it’s time for our 6th Annual Christmas Dinner and follow-up blog post! Back in 2006 there were five of us, I wasn’t on Twitter and I didn’t have my blog. What did I even do with my time? Six years later, there were at least fifteen people, the party went for 10 hours and there were intermittent twitter updates from nearly all involved, because that’s just how life is these days. In every sense: I never thought those years ago that we’d have a veritable family of so many good people. I’m not the best out there at making and keeping friends – to the point where getting referred to by someone as part of “my ladies” nearly brought me to tears the other day.
But anyway, let the bumper Christmas Dinner edition blog post commence! The day goes like this: I cook a huge feast, everyone turns up and eats it. This is my idea of fun, so don’t imagine me crying in the kitchen while everyone else is whooping it up. Alas, not everyone that we love could be there on Saturday but on the whole it was pretty astounding that we got so many people in the room this close to Christmas. Or anytime. 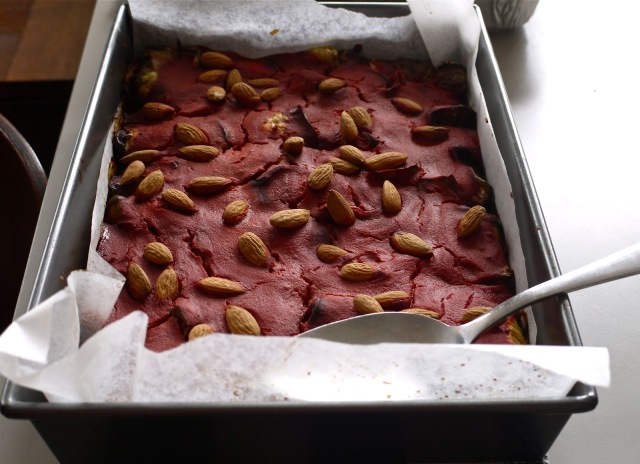 Involtini. I make this every year. It’s Nigella Lawson’s recipe, which for me has evolved and simplified into slices of eggplant, grilled four at a time in the sandwich press, with a spoonful of herbed, almond-studded quinoa rolled messily in each, covered in tomato sauce and baked. You’re welcome to feta it up or use bulghur wheat but I had some well-meaning half packets of quinoa that needed using up, resulting in this being not only entirely vegan but also gluten free. Hey-oh! 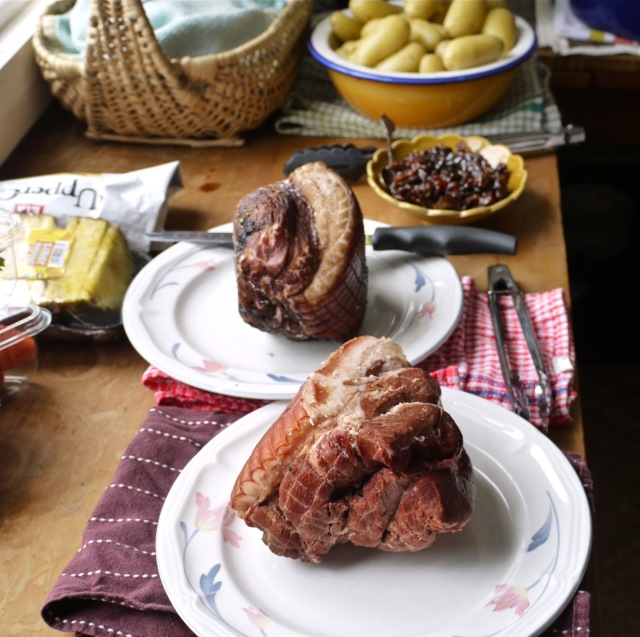 Keeping it Nigella I simmered vast quantities of pickled pork, or gammon as it’s known in the UK, in liquids till they turned into ham – in the foreground is the one I cooked in Old Mout Cranberry Cider, and in the hindquarter is one I cooked in Budget Cola. Both wonderful. Cola has a smoky cinnamon kinda flavour while cider has that distinctive musky fermented-fruit thing going on, both of which are excellent when absorbed into the fibres of sweet, salty pink ham. Pickled pork can be a bit of a misson to find but it’s worth it – I got mine from Preston’s butchers (near Yan’s on Torrens Terrace in Wellington city) and the people there were so friendly and it was so reasonably priced and I totally recommend them. 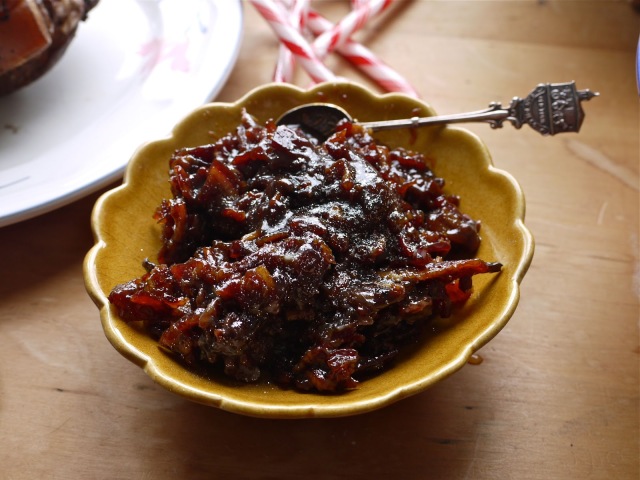 Didn’t have the mental capacity for gravy, so instead I made up a batch of the wondrous balm that is Bacon Jam, and then – as you might be able to make out here – sprinkled over some edible glitter. Christmas christmas christmas! Honestly, this is one of my favourite discoveries of 2011 – nay, my life. It’s jam, but instead of raspberries or whatever, there is bacon. It’s perfect, it tastes as dazzlingly sticky and sweet and salty as it sounds, and it gives the feast an insouciant Ron Swansonish air. 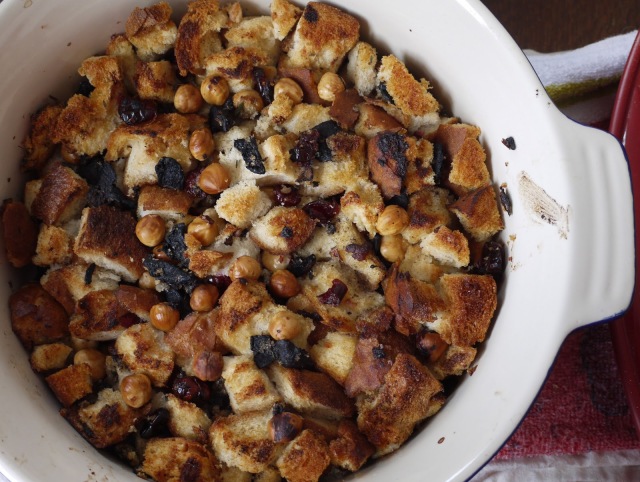 This Hazelnut, Cranberry and Mushroom Stuffing was a new recipe from Fine Cooking magazine – entirely vegan, with the ingredients being both Christmassy but also ideally suited to each other. I simplified it to suit my needs and budget. For a recreation of my appropriation (across the nation!) roughly cube a large loaf of sourdough or similarly intense bread, drizzle with oil and toast in a hot oven. Meanwhile, fry up a diced onion and a whole bunch o’ mushrooms – the fancier the better, but I used regular button types – the real important thing here is quantity, as they reduce down. Mix together the whole lot, add a large handful of toasted hazelnuts and dried cranberries. Pour over 1 cup of stock (I used miso soup – it’s what I had) and bake for about 40 minutes at 190 C/350 F. The rich, sweet hazelnuts and savoury aggro of the mushrooms plus the occasional burst of cranberry against the croutonesque bread is some kind of taste revelation, I assure you. 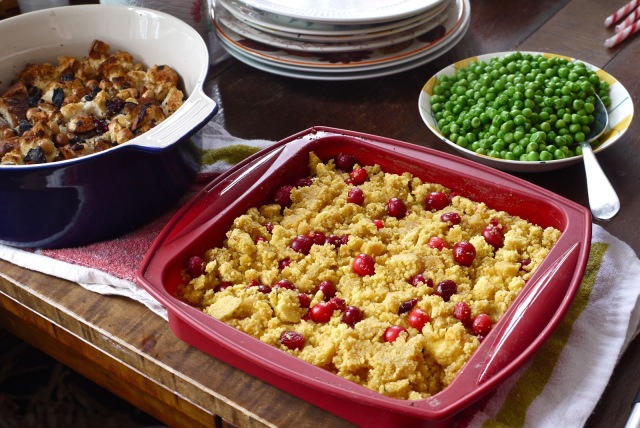 I make this cornbread stuffing every year. Cornbread’s one of my favourite foods as is, but mixing it in with eggs, butter, and cranberries then baking it again is perfection achieved. There was a bit of trouble in making it this time though, and I’m going to write it in tiny, tiny letters so you don’t all go green around the gills and start crying instead of my intention of making you salivate like hungry Alsatians. (Three rotten eggs in a row. THREE. They had weeks before the “use by” date and I even did the thing where you check it in a glass of water. The utter depressingness of that dull, formless thud with which the contents of the shell hit the bowl combined with the smell which hits you straight in the back of the throat takes you to a dark place when people are turning up in an hour, but with some reassurance, some rescue remedy and some hastily opened windows we got through it.) Also, spot the peas – I heedlessly bought 2kg of them going cheap at Moore Wilson a while back and so their presence on this table, in order to cut down on my freezer’s crowded infrastructure, was non-negotiable. 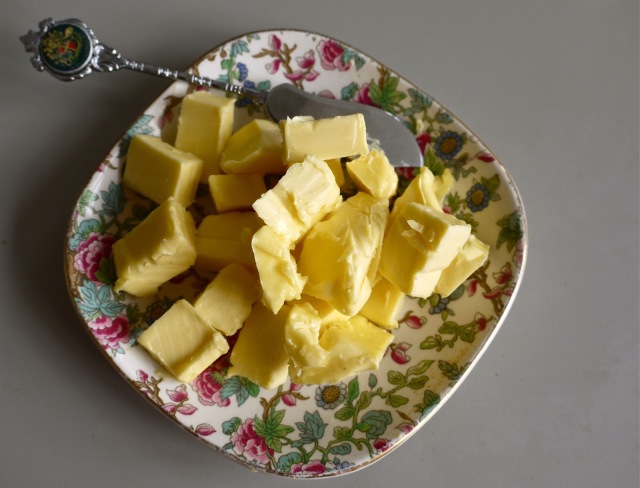 Butter in cubes on a small plate with a proper knife: because I am turning into my mother more and more every day. I love that my friends who stayed for ages and required a late-night snack asked where this butter was so they could spread it on the leftover cold potatoes. 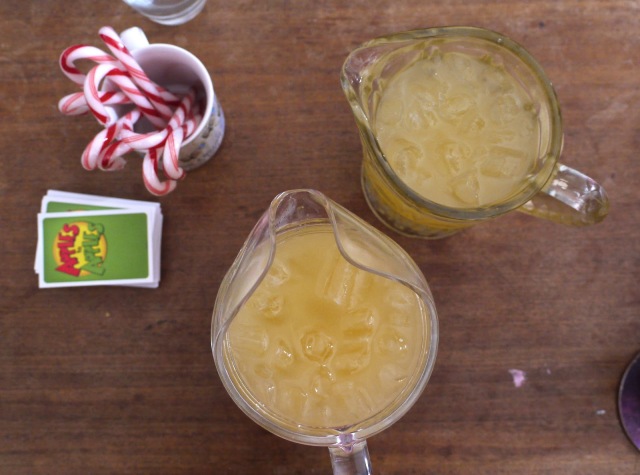 “FLIRTINIS ALL ROUND”. Because of a few lines in The Mighty Boosh, and because increasingly it seems everything I consume has to have a pop culture reference attached to it, I made this drink. Increasingly come-hither was that Nigella Lawson herself recently put a recipe for it online, giving me even more assurance that it was meant to be. Flirtinis are fairly hardcore but divided amongst many guests and with lots of food as blotting paper it’s all good. In a large jug, mix one cup (250ml) vodka and one cup fizzy white wine (eg, Lindauer) and top up with pineapple juice – about a litre, depending on the size of your vessel of course. Stir with a wooden spoon like you’re Betty Draper and serve in plastic cups so you don’t have to do so many dishes. 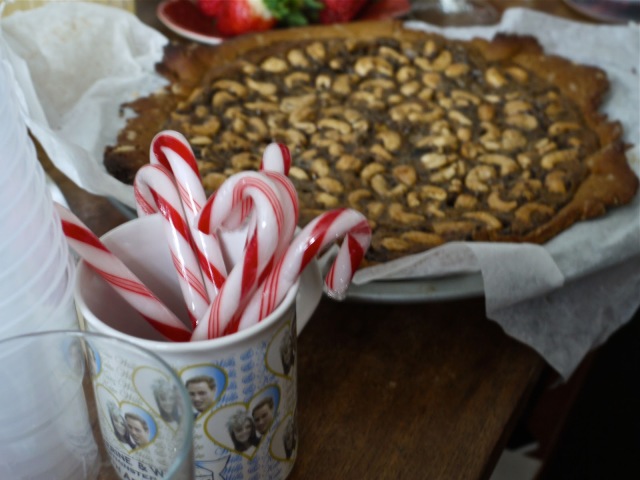 Oh, this pie. Coffee Toffee Salted Cashew Pie, to use its full title. Another revelation from Fine Cooking, which I adapted quite easily to make necessarily dairy-free. And, with all due respect to Fine Cooking, to be less sugary and to include cashews. I think American palates have a different capacity for sugar than ours, and also cashews make a cheaper – but still exciting – substitute for their choice of pecans. 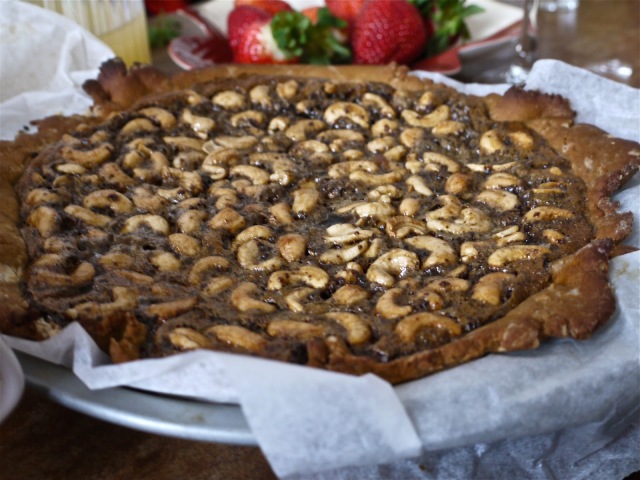 Into a pie plate lined with a half-batch of this cookie dough, (minus the spices, and you don’t need to blind bake it) tumble 1 cup of salted roasted cashews and pour over a whisked up mixture of 1 cup golden syrup, 3/4 cup dark brown sugar, 2 tablespoons rum (I used Smoke and Oakum’s Gunpowder Rum), 2 tablespoons instant espresso powder – yes instant, it’s useful for baking and it smells weirdly alluring, okay? Look for the blue packet by Greggs – 2 tablespoons rice bran oil and three eggs. Bake at 190 C/375 F for 45 minutes to an hour, covering with tinfoil if need be. You then need to let it cool completely. I didn’t see this instruction and it would’ve saved me a reckless moment of “We’ll just eat it now and if it’s not set it can just be sauce for the ice cream, dammit!” Fortunately everyone managed to talk me down in a chorus of soothing voices while we stashed it precariously in the freezer, and it really was better for a good chilling, especially as the cold went some way to soften the intense sugar hit. It’s an incredible pie, with salty creamy cashews in their pool of intensely dark caramel-caffiene filling.
And finally, some ice cream, since that’s my kneejerk culinary response to the promise of people in our house. This is the only photo I got of said ice cream, but in the back is my own Chocolate Coconut Ice Cream – which I’ve made many times now since Christmas 2009. It’s beautiful and it’s dairy-free and I can now make it in my sleep almost literally, but should you be awake and trying it for the first time it’s not overly taxing either. In the front is Lemonade Sorbet (with a hard ‘t’) which started life as failed jelly; it was a little weird but refreshing, and the price was right. 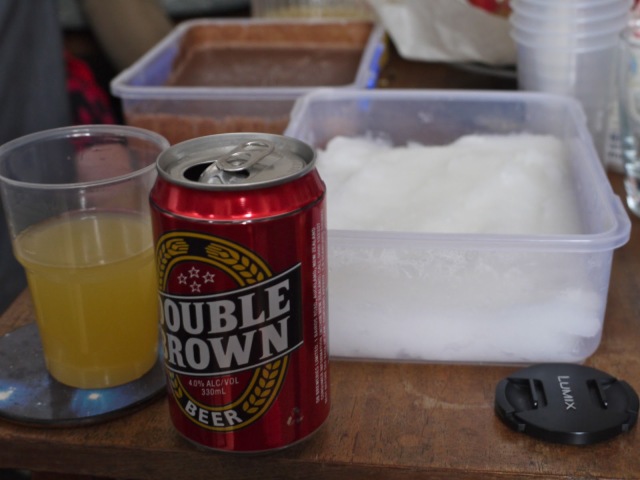 There were also two roast chickens – but no-one wants me to try and take a decent photo of their sorry hides, and beautiful canapes from Jo, and homemade bread rolls brought by Piona (that’s Pia and Fiona but don’t their names condense perfectly?) There was a moment where everyone became anxious and queasy during Barbra Streisand’s Jingle Bells (you think I’m exaggerating! Not this time!) there was a psychological skirmish during supercool boardgame Apples to Apples; there was an incredible reveal from Pia whose orange dress looked cool enough under her coat, but upon removal of that coat it turned out the dress sleeves were layered and ruffly like a flamenco skirt on each arm; there was candy cane whittling; there was imaginary Christmas cracker pulling; there was semi-unpremeditated singing of Total Eclipse of the Heart; there was a portrait of me etched in a pudding bowl; there were at least ten candy canes per capita, especially once I got changed into my candy cane-esque dress; and there was so much food brought to donate to the Downtown Community Ministry Foodbank that Tim and I will have to drive it down in our ute because it’s too much to lug down in our collection of environmentally conscious yet aesthetically designed shopping carry bags. We love our friends.

And now, mere singular days from Christmas I am typically underslept, however I managed to finally get a tiny bit of Christmas shopping done, including a small gift for myself of a flower hairclip. It’s amazing how when your personality and brainpower has evaporated due to lack of sleep, put a big flower in your hair and you can trick yourself into thinking you’re still an interesting person. 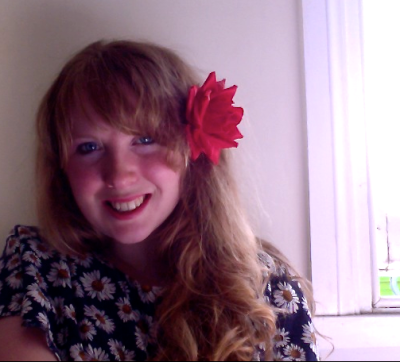 Still Haven’t Got My Gift by The Goodfun. Hilarious. But also a really nice tune.

O Holy Night, Liz Callaway and her sister Ann Hampton Callaway. You may think you’re over this son but Liz’s silvery voice against Ann’s rich golden one is pure joy for the ear canals.