Disliking, and having zero aptitude for science at school doesn’t preclude me coming up with several scientific theories, the hypothesis and measurement both being “I think it’s real and so…yeah.” One such theory being: Time totally, without doubt, speeds up when I’m with people I love. Fact. For example, Tim and I spent our New Year at Raumati Beach with the sort of amazing friends we only ever get to envy other people having. Between the beautiful blanket fort, the nail painting, the guitar playing, the Point Break watching, the homemade liqueur and gin and wine drinking, the feasting, the dancing to Wuthering Heights (alas caught in real time on video somewhere), the nail-painting, the swimming, the reading of many books, the frying of many potatoes, the crying of many tears with laughter and the taking of one stroll, well it shouldn’t be surprising to anyone that time would unfairly speed up during all that.

Time also speeds up a little if one of your friends has cleverly made cat ears in your hair made of plaits and pipe cleaners and bobby pins. It whooshes right through your cat ears with increased aerodynamics.

I’ve always, since day dot, been hopeless at saying goodbye. Memories of crying when things are over – anything from great big emotional ballet performances to visiting an older, cool and magnanimous girl from down the road to play for the afternoon – all blur into one another. Luckily there was less of the actual tears and more of the joking about tears (to keep from the actual tears fighting through, you see) when the Raumati Beach times started to wind up, but I couldn’t help be reminded of all the times I’d been bad at accepting things are over. If you’re hanging out with me and I make yawny noises and comment on the time, instead of wild-eyedly suggesting we bust into the good whiskey, then you can either be disappointed…or, I guess, shiny with relief-sweats.

I made this marinated mushroom recipe four times in the last two weeks, and every single time it has been perfect. This is a sneaky lazy blog post, as I’ve already basically given the whole recipe in this story I wrote for 3news.co.nz on what to cook when it’s too hot to think about cooking. However I am tired and frankly a bit sneaky and lazy at the best of times too, plus, putting the recipe in two separate places on the internet shows you just how strongly I love it.

I made this for myself on the 29th, for the aforementioned friends on New Year’s Eve, for family on the 7th, and for myself again last night. Something about the name Marinated Mushrooms makes people nervously say “Oh no! You should’ve started it six weeks ago! We’ll have to have it another time” but this is actually good to go as soon as you stir it. It’s at its peak deliciousness after about 12 hours in the fridge, but truly. I tend to eat half of it while I’m making it, that’s how good it tastes.

I came up with this myself, but with a little inspiration from recipes belonging to the wondrous Nigella Lawson and the also quite wondrous Yotam Ottolenghi. Quantities are vague because I never once thought to weigh or measure the amount of mushrooms I was using. Just guess though. Science can’t get you here.

Wipe or peel the mushrooms – dirt will cling, and though it sounds fussy sometimes peeling’s much easier. Slice thinly and pile into a bowl. In a small cup or bowl mix the dressing ingredients together, tasting often and adding more of whichever ingredient your tastebuds feel it requires. Pour over the mushrooms, mix carefully. If it looks like it’s not dressed enough, drizzle in some more oil. Taste for salt – I add quite a lot – then either eat immediately or cover and refrigerate.

Maple syrup on mushrooms might sound a little too daring, sure. But raw mushrooms are quite mild and almost like tofu in that they can absorb into their porous surfaces nearly every flavour that passes them by. However, not to the point where you might as well be sucking salad dressing dejectedly (or happily!) from a sponge soaked with it. Their delicate, rain-on-cut-grass freshness is mighty fine with the smoky maple syrup and sharp mustard, and the polystyrene texture becomes even more pleasingly yielding to the tooth the longer it sits there in its dressing. Basically: this stuff is addictive so watch out. I’ve never eaten so many mushrooms in one sitting, in my life. 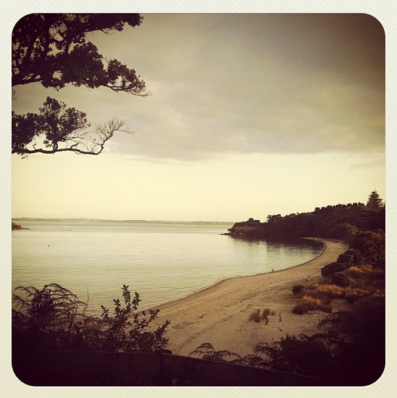 Needless to say, camping at this place with whanau for the 25th year in a row made time speed up significantly again. Somewhat grounding was how I got bitten to pieces by mosquitos, feasting away at my apparently delicious blood till my legs looked like bubble wrap. However I’ve bought some antihistamines and am hoping for the best, and now that I’m back in the world of Monday mornings and routines and so on, heck, they’re a reminder that summer holidays did happen and they were amazing. Until I got bitten.

What did you all get up to over the Christmas/New Years era? I’ve missed this blog a bit while internet was intermittent, but I’ve loved sleeping properly, seeing family and friends, eating well and reminding myself of the good things in my life.

Title via: Janelle Monae, Mushrooms and Roses from her album The Archandroid. This song’s a little ridiculous but I love her and the melody and intense chorussing pulls you along in a dreamy fashion. And it does have the word mushrooms in it.

Pat Benetar, We Belong. I’ve always disliked every single song Pat Benetar has ever called her own – except this one. It’s so annoyingly alluring and floaty and lush and I can’t honestly say I don’t like it. In fact…without quadruple negatives to hide behind…I like this song.

Stephanie J Block, Get Out And Stay Out. Her voice is stunning. Everything from the emotional, shuddery talk-singing at the start of this song to the crystal clear, exhilarating but not over-extended belting at the end is just so very listenable.

Next time: Something new, something you’ve never seen before, something highly edible, for starters.  I guess this is the last time I can get away with saying it before it gets too weird, so…Happy New Year, everyone!

27 thoughts on “mushrooms and roses is the place to be”