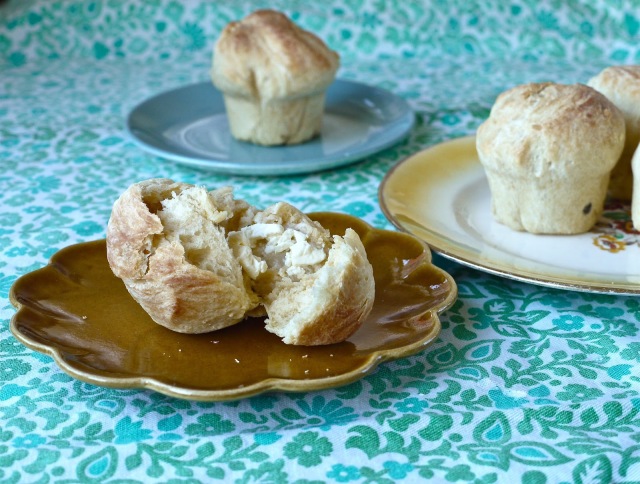 I know I’m always trying to work more ice cream into my life, but bread-making is well up there on the continuum of my favourite things to cook. Plunging your hands into soft dough, their warmth kicking it into life, watching it rise like you’re David Attenborough narrating the time-lapsed life cycle of a rare tree, the intoxicating scent of it as it bakes, the impressed gasps of those around you when you tell them that today, you achieved bread. Bread is wonderful enough as it is, but brioche is like the Baby-Sitters Club Super Special edition of the leavened dough family: richer and sweeter and far more exciting. It tastes just like a croissant but is more solid and grippable. Don’t you hate with croissants how all the best bits crumble off upon impact and end up caught in the fibres of your wooly jumper and worked into your ponytail and embedded in the seams of your jeans? (Just one of the reasons I no longer wear jeans.) No danger of this with brioche. All of the butter and none of the disintegration.

I was recently musing upon the great cafe combinations of the nineties. Now I don’t want to come across as a snob. I mean, I eat cold spaghetti from the tin for fun, and I didn’t try couscous for the first time till well into the new millenium. I am no human barometer of what is good. And yet. When I see a chicken, cranberry and camembert panini or apricot and brie panini or whatever being sold for $8.95, I can’t help but shake my head wearily. Do people really like them? Still? Spinach and feta is slightly later on the timeline, if I remember right, but it was the combination of a certain time. And while eating a spinach and feta scone I got to pondering: What’s the deal? What does the spinach even do? It works in spanakopita: surrounded by crunchy pastry and generations of existence, the spinach shines. But sliced up and baked into limp submission inside a scone, it provides green stripes, at best. At worst, it’s bitter, every last particle of it gets caught in your teeth, and it takes up valuable space where more feta could be.
Now mint, on the other hand. Mint provides that toothpaste-cool hit which works beautifully with feta, giving it that summery light-hearted vibe, lifting the saltiness and butteriness with its pure, sweet flavour. And mint is about a twelfth as likely to get in your teeth, since there’s so much less of it.

As I said, I love bread baking, but I haven’t done it in ages – and really, late afternoon after flying home from my brother’s 21st birthday up home might not have been the most prudent time to embark upon an invented yeast-based recipe. But my instincts were convincing enough that I went ahead with it anyway. And it worked! Thank goodness, because we only buy feta about once every three months and I didn’t want to waste it on a failed project. Brioche is not that scary – the only annoying thing about it is all the time it needs to rise. Three times it rises! Three! But please persevere. It can have varying degrees of butteriness: I only used 90 grams since…that’s what we had in the fridge. Don’t worry about needing any special tins – I spied the muffin tray and thought (okay, maybe I said it aloud) “You there! You’ll do!” I was right.
Feta and Mint Brioches
Makes 8. An idea by me.
500g flour (plain is fine)
1 sachet active dry yeast
3 tablespoons sugar
3 eggs
1/2 cup lukewarm water
80g soft butter
pinch salt
100g feta, chopped roughly and mixed with 2 tablespoons chopped mint
In a large bowl mix the flour, sugar, salt and yeast. Crack in the three eggs, pour in the water, and mix to a sticky dough. Knead till soft and bouncy, then massage in the butter, small pieces at a time. This might take a while. But it’s really fun. Leave covered with clingfilm to let it it rise, for about an hour. Punch it down, right square in the middle, then form into a ball and let it rise again for an hour or two in the fridge. Finally, cut it into eight pieces, force a little pocket in the middle of each piece with your finger, then stuff with a little mint-feta mix. Pinch the edges closed, then sit each one in a buttered muffin tin, pinch side down. Leave again – I’m sorry! – for an hour before baking at 200 C for 25 minutes. Carefully lift a brioche up and tap its base – if it sounds hollow, should be all good.
If at any stage you feel you need a little more liquid or flour, trust your instincts, as different ingredients/temperatures/metres above sea level will produce different results. But only go a tiny bit at a time.

The movie A Mighty Wind is one of my very favourites, and it stands up easily to many a re-watch. I’d say I watched it more times last year than I ate feta, for one thing. Since watching it, I’ve latched on to the phrase “it can’t be overstated”, which is used to describe the kiss between Mitch and Micky in their song (okay, you had to be there.) I might overuse it the way some overuse the word “literally” (am looking at you, Chris Traegar, but it’s literally adorable on you) but I like it, and it’s so applicable: the deliciousness of these brioches frankly just can’t be overstated. See?

The crust is crisp and yet with all the buttery promise of a flaky croissant, without the crumbliness.  Inside is soft, golden-tinted and warm with the sharply salty feta dissolving creamily on the tongue. The mint is not there in large quantities, but absolutely present, cooling and contrasting with everything else. Altogether flipping brilliant.

And, as I said, I managed to make it after flying home from my brother’s 21st in the late afternoon, so you can surely do it anytime. We had such an awesome time up home – the party was music-themed (I don’t know about you but my family has a thing with dress-up 21st parties) and Tim and I dressed up as the White Stripes. My Mum and her best friend were Agnetha and Anni-Frid from ABBA, Dad was a Seargeant Peppers-era Beatle, and my brother made a commendable Billy Corgan from the Smashing Pumpkins. It was just one of the best parties I’ve been to. There were streamers, a live band – which Dad used to play with, and which played good music to dance to – not even the sort of music where inside you’re like “Oh my gosh I hate this so much but there are people around that I care about so I’ll pretend to enjoy dancing to it”. Dad – whose birthday it was also, since he’s born on the same day as my brother – got up at one point to do a fairly wild keyboard solo. Later in the evening he and my brother played a rollicking rendition of Saw Her Standing There by the Beatles.

There were alsatians that ran up and down the road and inside the hall. Two giant alsatians! They didn’t seem to be looking for trouble, they could probably just smell the many kilos of ham. Nonetheless, I’d forgotten that that sort of thing just happens at home. And I secretly wanted to confiscate them and make them my pets. 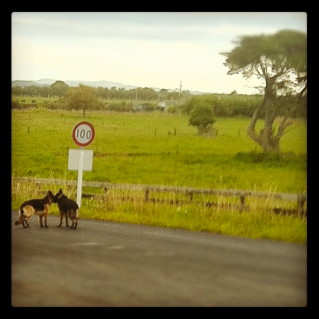 There was a cake that I made and iced to look like a record, at my brother’s request. I may never get the black food colouring off my hands, but with some logistical supervision from Tim and my 9 year old cousin, I think it turned out pretty snazz-tastic.

And there was kilo after kilo of ham. Which we all got to eat the next day after people had arisen from where they fell. I also got to see my long-missed Australian-based Aunty, got to nick the gorgeous – well I think so – bit of fabric that the brioches are sitting on, and…while looking for old schoolbooks of my brothers to festoon the party with, Mum found this that I’d made many years ago:

After the laughter subsided, I realised how little I’ve changed. Obsessive about things and in a super-righteous way; full of dubious ideas that seem great in my head but are a bit awkward on paper; misguidedly entrepreneurial; liable to mix up simple things like AM and PM. But I think I turned out alright in spite of, nay because of it. (Also: if you look closely you’ll see that my signature then did not in anyway resemble my name, but rather a small figure surfing on the back of a swan. This was because I didn’t want to be shackled by the conformity of your signature actually having to look like your name when it could be an artistic expression instead, or SOMETHING. My uncoolness cannot, as they say in A Mighty Wind, be overstated.)
________________________________________________________
Title via: The Ladies Who Lunch, a song more salty and sharp than feta from Company, one of my favourite musicals. Sung perfectly by the wonderful Elaine Stritch. Please watch. I’m pretty sure even if you don’t like musicals, there might be something in this for you.
________________________________________________________
Music lately:

Radar Love, Golden Earring. This got played at the party. Mum and Dad both like this song – it has some significance, I can’t remember what exactly – Mum? – and there’s something about watching one’s parents dancing away dressed up as pop stars to a song that makes one like it too.