When I was a kid I used to draw and draw and draw and draw. When you’d get your stationary at the start of the year I’d ask to get an extra “jotter pad” (those A4 notebooks with weak, brownish paper and inevitably a cartoon elephant on the front), one for actual schoolwork and one to draw in. At one point I managed to procure, somehow, one of those enormous notepads for offices that are nearly the size of a table which I hubristically and ostentatiously kept on my desk for drawing on when I was done with my schoolwork. (It gets worse. I also used to also keep a large stack of books on my desk for reading in between being taught stuff. Like, while the teacher was right there still teaching everyone things. OH the conceit! But admit it, it’s a good idea.) There was untold envy and reverence for my best friend at the time, who got her hands on one of those large, seemingly endless rolls of butcher’s paper. Basically my life revolved around obtaining surfaces to draw on. What did I draw? Well…ladies. Initially the Babysitters Club (both scenes from books and those imagined) then Spice Girls (I had a jotter pad expressly for drawing them) and fashion designs and characters from my stories. Like a woman called Stuyvesant who had blue hair and a black belt in karate. 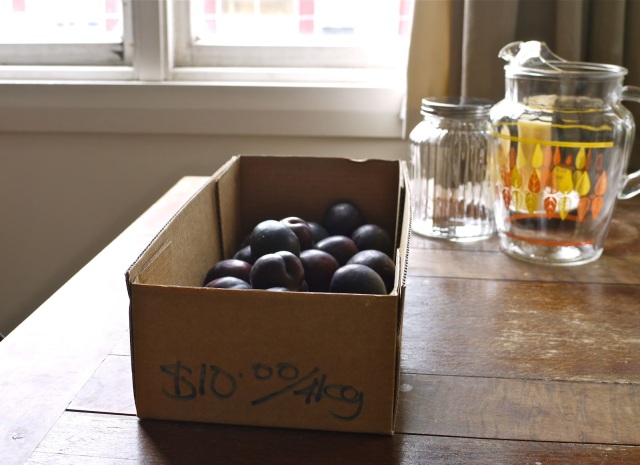 So you could say I liked drawing and did it a lot. Somewhere down the line though, I lost the habit of drawing constantly. Fast forward many years to yesterday, when I casually picked up a pen to doodle away and I just couldn’t. Muscle memory means I can still remember bits of dances I learned over fifteen years ago, but drawing was just not working for me. It wasn’t like getting back on a bicycle in any sense of the word, since…I can’t ride a bike either. (I know. What kind of child of New Zealand am I? Frankly drawing the Babysitters Club was much more fun than cycling looked, which didn’t help with my motivation. Also I could not stay upright.) Has this ever happened to you? Something you were so invested in, which suddenly disappears on you? 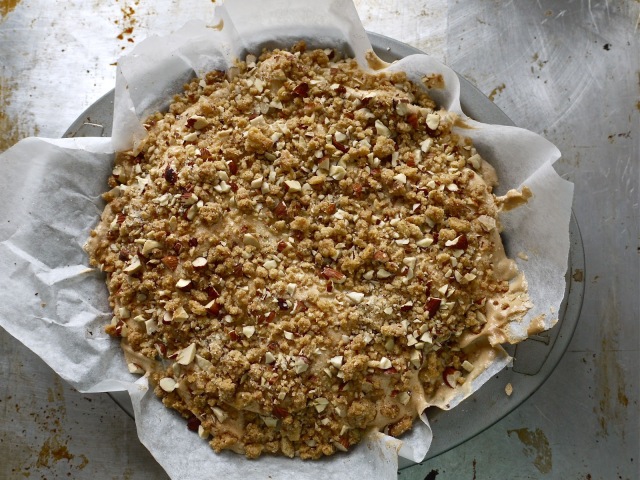 Happily, some skills work in the right way, going from fearful to awesome. Like pie! As a food-interested youth, pie seemed so far out of my league that I practically had a Pretty in Pink relationship with it, the out-of-reach Blane to my uncool Andie. These days I’m more like Clare in the Breakfast Club to pie’s…anyway, my point is I’m now really calm about making pie, pastry and all. It is no big deal to me. Even with an florid title like Plum Chocolate Meringue Crumble Pie. Although it sounds like too much detail to take on board, it’s a remarkably cohesive disc of deliciousness, inspired by two things: the many kilos of plums Tim and I bought in Greytown with friends Kim and Brendan, and the beautiful Favourite Recipes of America: Desserts book that I scored in Featherston, which I showed you in my last post.

So instead of showing you the book again, I’ll show you where we got the plums from. See how excited I got with the Instagram filters! 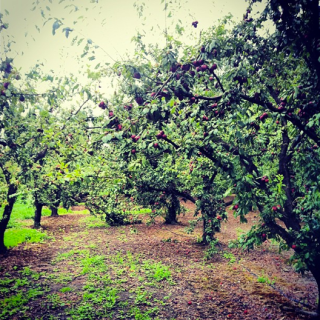 Like we were purchasing plums in a Primal Scream music video!

This Favourite Recipes book I mention was published in the sixties and is full of more delight than I can possibly convey. So I’ll just list a couple of its dishes. Berlin Peach Punch. Miami Beach Birthday Cake. Lime Highbrow. Raspberry Razzle. I should like to make them all. (Especially the Berlin Peach Punch, anyone want to donate me some brandy?) It was, however, very light on plum recipes. So I used another recipe from the book and ended up changing it so much that it doesn’t bear a ton of resemblance to the original. But thanks all the same, Mrs Ivan Kessinger of Morgantown, who submitted the Cherry Crunch that I based the following on. 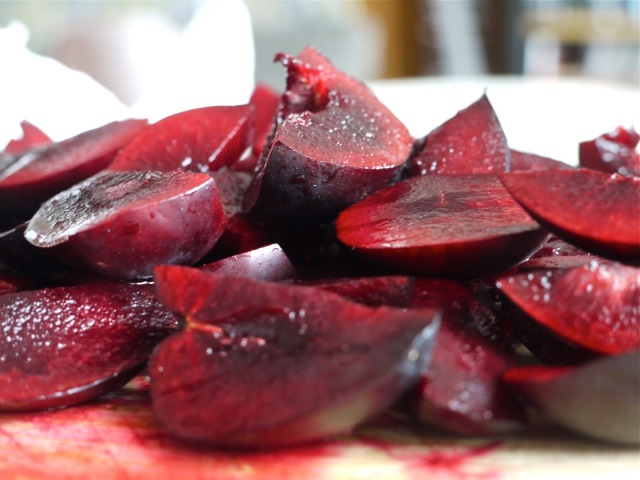 It’s not as difficult as it sounds – for one thing, there’s no pastry to deal with or filling to mix and heat. There is, admittedly, meringue, but as it’s covered with crumble you don’t have to put too much investment into how good it looks, plus two lonely egg whites’ll whip up before your arm muscles have even had a chance to get sore. 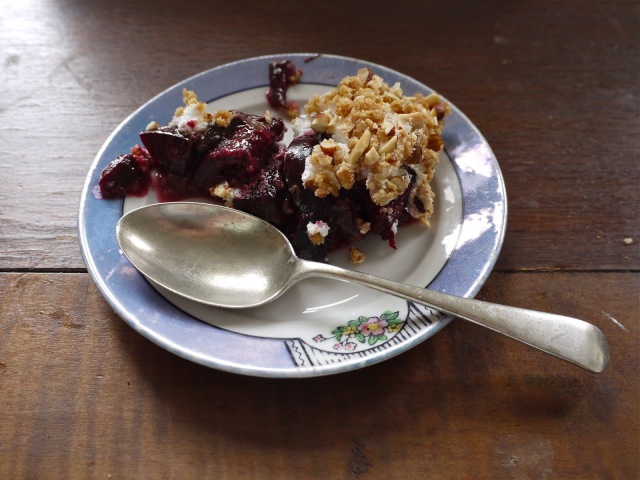 And it is stunningly, well-timed-thwack-to-the-back-of-the-knees-staggeringly delicious.


Smash up the biscuits – either in a food processor or with a rolling pin. Mix in the melted butter and cinnamon and try, just try not to eat it all because you’ll need it! If you suspect you will eat lots, then add more biscuits and butter, of course.


Press 3/4 of it into the base of a paper-lined pie tin, to cover the base and about 1cm of the sides. Keep the other 1/4 for later…


Bake at 180 C for 10 minutes. Remove from the oven, turn it down to 130 C, and throw in the almonds for a few minutes to roast, if you like – if you can’t be bothered, I understand. Either way, the oven needs to be 130 C. Sprinkle the tablespoon of flour and the extra tablespoon of sugar over the biscuit base, then slice up the plums and roughly chop the chocolate and layer them up on top of the flour and sugar. Try to layer the plums in such a way that they’re fairly smooth, so that you don’t have any trouble layering the meringue over.


In a clean metal bowl, whisk the egg whites till thickened and frothy, then slowly add the sugar while whisking continuously, till thick and shiny and bright white. Carefully spread this across the top of the plums in the pietin. Roughly chop the almonds and mix them into the remaining crumble, scatter this on top of the meringue. Bake the pie for 35 minutes. Allow to cool a little before eating. 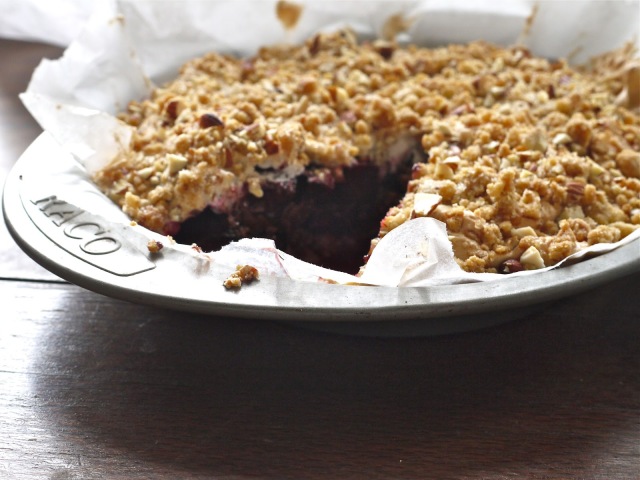 It’s honestly not as ridiculously sweet as it sounds. The salty butter and sharp, juicy plums keeps all that in check. You would not believe how brilliant sour plum juice and creamy milk chocolate is when it melts together. Not forgetting the soft solidness of the meringue relinquishing against the crunchy, almond-rich crumble top. 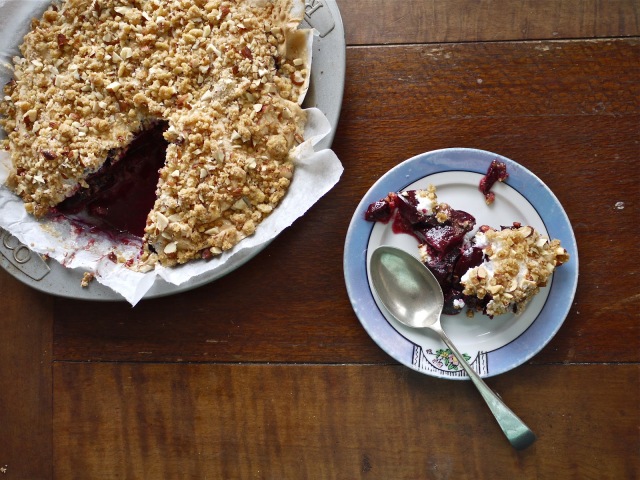 It’s genuflectingly delicious. Really the only problem is, as you can see, it’s not particularly solid. This could possibly be helped by refrigerating the heck out of it, but it’s wonderful at room temperature – all the flavours really shining – so just be prepared to carefully ease it out of the pie tin and eat the broken mess that lands on your plate with a spoon.

I am also OBSESSED with the song Rockin’ Back Inside My Heart by Julee Cruise, from Twin Peaks – you do not want to know how many times I’ve listened to it this week, since first hearing it in an episode where it’s sung at the Roadhouse. I know the title is awful (I thought it was “right back” and I’d like to pretend it really is and everyone else has been wrong the whole time) but it’s so hypnotic that I don’t really mind.

20 thoughts on “dance on the coral beaches, make a feast of the plums and peaches…”