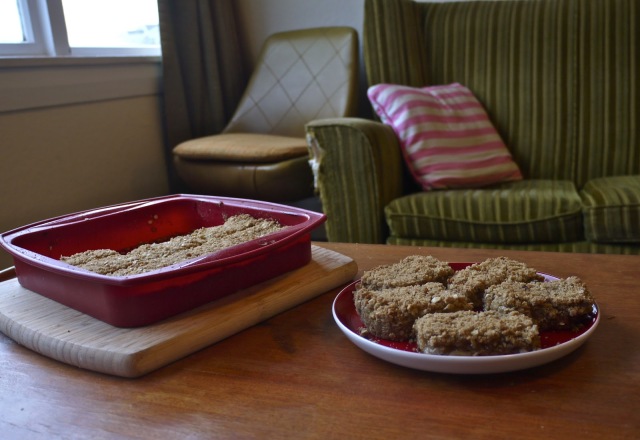 Shrewd readers will note that these photos haven’t been taken at my place. Less shrewd readers will note that these photos haven’t been taken at my place after I tell you that they haven’t. Hey, we can’t all be shrewd.
I made these Pineapple Secrets to take round to Kate, Jason, Kim and Brendan’s flat, which is Tim’s and my home away from home these days, to accompany a wild game of Settlers of Catan. For about 15 minutes it looked like I was going to out-strategise everyone and be queen of all I surveyed, but then I unsurprisingly slid back into last place. Fortunately there were Pineapple Secrets to sweeten the deal. I chanced upon them in by beloved Favourite Puddings of America cookbook, a book that keeps astounding me with its amazing recipe titles – like Perfect Divinity, don’t you just want to make that immediately? (It’s some kind of toffee-meringue confection, by the way.) Pineapple Secrets are part of your basic slice genus, being the kind which have half the mixture pressed into a tin, a filling spread across, and the rest of the mixture toppled over before baking the lot. 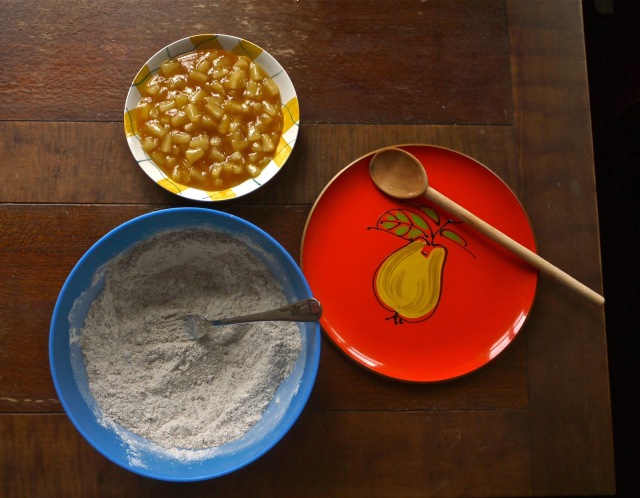 That’s not baked beans in the yellow chequered bowl, by the way. Tim thought it was. It’s canned pineapple, simmered with a little cornflour and sugar.

Speaking of achingly cool things like playing Catan, on Friday night a party spontaneously formed at Tim’s and my place and – get you this – I managed to dupe everyone into listening to my Chess record, and if memory serves me correctly, it went down a treat. There is no better way to spend a Friday night than rapping to One Night In Bankok for a doubtless un-alarmed crowd, I promise you. I also remember Wuthering Heights being danced to, which feels hardly surprising – our capacity for that song has been tested but never met.

Still on the cooler-than-everyone* thing, on Saturday night we had book group at our place and attempted Literary Karaoke (where you look up songs on YouTube that reference books and then sing along!) Wuthering Heights got played again. Three separate versions. Told you we hadn’t reached capacity. (*When I say ‘cool’ I’m not being ironic*) (*I wasn’t being ironic there either.)

So while this cookbook can be heavy on recipes containing packaged cake mix or “marshmallow creme” whatever that is, when it’s good it’s brilliant, and these Pineapple Secrets are near-on spectacular. Even with all the cake mix I love the naive adventurousness of recipes from that 50s/60s era. Once I’d gotten over the adorable name (wait, that’s never going to happen) I appreciated how the ingredients were all in my cupboard or fridge at a time when both were feeling a little empty. This is just chance of course, but so delicious are the Pineapple Secrets that if you’ve got what it takes, I thoroughly advocate that you try making them yourself.

This slice is crumble-topping-esqe and sturdy, with a sweet, summery pineapple filling. While I love biscuits and cookies, the slice gets the jump on them any day with how easy it is to bring it into existence – no rolling out, or cutting, or cooking in batches. Not much of anything in fact, as this is not in any way a difficult recipe. Indeed what it lacks in difficulty it makes up for in deliciousness. Hooray! 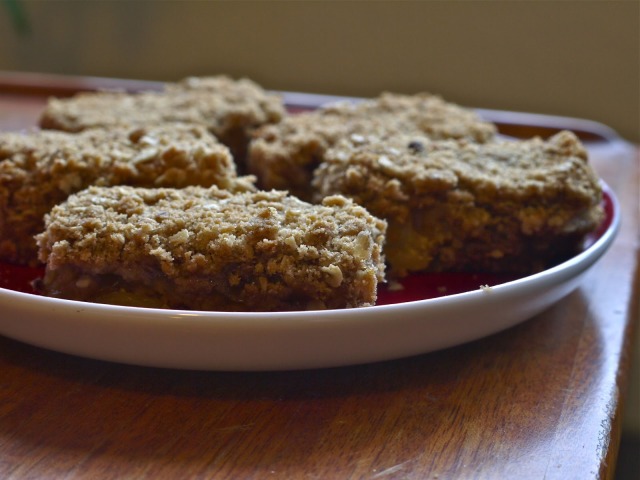 
Set the oven to 190 C/400 F. Simmer the pineapple and its juice, 1/4 cup brown sugar and cornflour together till thick and syrupy, stirring often. This shouldn’t take too long. Then, mix together the dry ingredients and rub in the cubed butter till thoroughly incorporated and resembling damp sand.


Take half the butter/flour mixture and tip into a greased, square baking tin. Wet the back of a spoon and use it to press down carefully on the mixture. Tip the pineapple and sauce over the top and spread across. Tip the rest of the flour mixture evenly over the top and use the back of the spoon again to very carefully smooth and press this down again. Bake for 30-40 minutes and allow to cool considerably before slicing.