March 25, 2012March 11, 2020
There are so many things I’m no good at. I’ll be the first to tell you. But no false modesty about one thing: I can speed read. When I was a kid with no income (I lived in the country! There was no such thing as a paper run) my skills would be particularly useful – if we ever went to town, I could absorb a Babysitters Club book in around 15 minutes in the bookshop, thus saving my family a cool $5.95 each time.

Further to this, it seems everyone I know has been reading the Hunger Games books recently. This week Tim and I planned to meet up with a group of friends for a BYO dinner on Friday night, after all of them had seen the Hunger Games movie. On Wednesday night Tim started reading the book itself out of curiosity and finished it the next day. On Thursday I realised I was going to be the only person at the dinner table on Friday night who wouldn’t have read it or seen the movie. So I thought to myself: Can I read it by the time we get to the movie? Could I what.

I finished it in less than three hours, that very night. Including checking Twitter constantly, and making dinner (which was toast, but still. Dinner.) While the book itself is easy enough to gallop through, I clearly still have the speedreading magic. At lunch on Friday it took little more than some significant eye contact for Tim and I to know exactly what the other person was thinking: we should book tickets to see the movie with everyone else that night. After the movie I nearly floated out of the cinema and analysed it so hard I almost lost my voice. Roughly 24 hours previous I was opening the book for the first time, knowing nothing about it other than the lead character was called Katniss and it was really, really popular. The only thing faster than my reading, was the material I was reading’s ability to win me over. It won me over so fast it deserves an ironically slow clap from a crowded room.

However, back when I made this Coconut Raspberry Loaf on Wednesday to eat during an afternoon with my friend Kate, I was none the wiser. I strode purposefully up to her house in Mt Vic with the cake only partially cooked, because I was already late and it was taking forever to cook and I was starting to feel like I was in one of those dreams where you’re trying so hard to get to your destination but things keep slowing you down and you never actually make it. Irrationally, I grabbed the wobbly loaf cake from the oven, wrapped the tin in several teatowels, put it in a bag and left (of course the wind dropped and the humidity rose at this point, directly in relation to the gradient of hill I was climbing) and continued baking it for a further 15 minutes at Kate’s. Still turned out fine, which bodes well for your baking it in uninterrupted circumstances.

My entire motivation in these photographs was getting the cool couch in the background.

Raspberry Coconut Loaf with Raspberry Icing
Adapted liberally from a recipe in the Best of Cooking for New Zealanders Book.
150g butter, melted
250g sugar
2 eggs
250g flour
2 teaspoons baking powder
3/4 cup dessicated coconut
3/4 cup milk
3/4 cup frozen raspberries
1/2 a cup extra raspberries
1 – 2 cups icing sugar
Set your oven to 180 C, find a loaf tin and line it with baking paper. My way of doing this is to just get a large rectangle of baking paper, squash it down into the inner corners, and then throw in the batter to hold it down. Your finished loaf cake will have some inconsistent lumps and bumps but don’t we all?
Whisk together the melted butter and sugar to combine, and then beat in the eggs till the mixture is a little lighter in colour. Sift in the flour and baking powder, tip in the coconut and milk, and stir vigorously – you may need to move to a wooden spoon or spatula if it’s too much for the whisk. Finally fold in the raspberries, tip the mixture into the tin, and bake for about an hour and a half, although start checking it for done-ness at about an hour – give the top a prod and if it’s wobbly, it’s not done yet.
For the icing, simmer the raspberries in a tablespoon or two of water till soft, then push through a sieve to remove the seeds – I know, horrible job – then stir in icing sugar to the juice that remains below till you have a smooth electric pink icing. Thickly spread across the somewhat cooled cake. 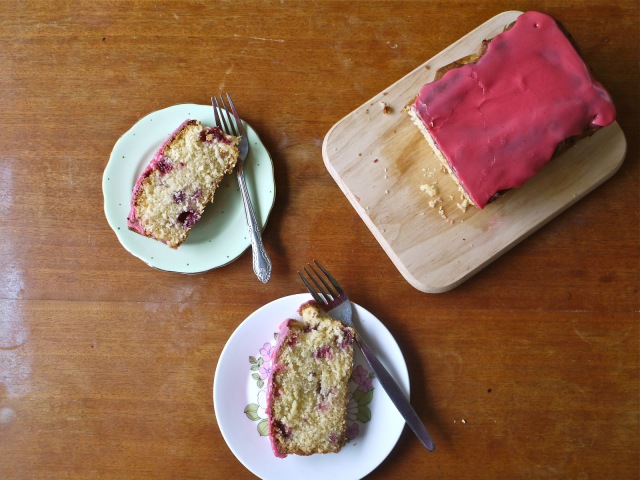 Not one drop of food colouring went into that icing. Who knew raspberries with their natural muted-garnet hue, had it in them to deliver electro spilled-nailpolish pink like this? Not I. I was expecting a kind of dull, uncooked steak colour at best, not this bodacious fuchsia, the stuff of $2 Shop lipgloss.

Coconut’s mild sweetness and the sharp juiciness of raspberries work beautifully together. While you could leave the icing off if you’re in a hurry or don’t have enough raspberries, the fast-dissolving nature of the icing sugar and retained sourness from the fruit adds marvelously to the overall deliciousness, more than your usual, potentially oversweet icing might. This cake is easy to make, slices beautifully, and the coconut and fruit makes sure it’ll be okay the next day too. Frozen raspberries are cruelly costly,  but I wanted them for a few different reasons and so stuck to my guns. But you could use the cheaper blackberries or boysenberries happily here. Or even just leave them out altogether and you’ve got yourself a rather choice plain coconut loaf recipe. 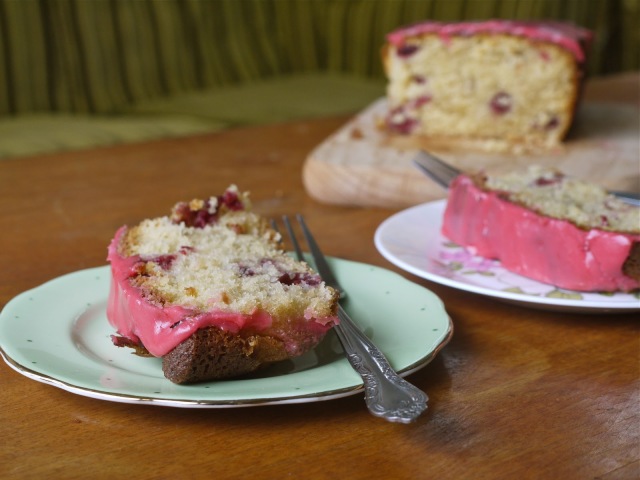 Basically it’s amazing, plus it easily stands up to a cross-town dash in the middle of the cooking process.

Tim and I spent last night at the Wellington Zoo – with most of the people that we went to see the Hunger Games movie with. Yes. They run sleepovers during the warmer months, and usually schoolkids are their main market, but about 28 adults instead were there last night. Getting up close to the animals without any of the usual crowds? So cool. Sleeping on the floor, separated only from its unyielding flatness by a couple of thin sleeping mats? Do-able as. Discovering the Mighty Boosh-esque lizard lounge for various reptiles, decorated with records by Julio Iglesias? Delightful. Realising there was a pelican, one of the things I fear most in this world, living on Monkey Island where we gathered for 20 minutes to feed its simian inhabitants? Blood-chilling. Apart from that ugliness though (and thanks to everyone who helped by saying “it’s gone! Oh wait it’s back” while I hid my face in Tim’s shoulder) it was a fantatically awesome time.

Especially when this sunbear stood on her hind legs and waved to us.


Bic Runga, Tiny Little Piece of My Heart. As beauteous as she ever was at this sort of thing.

20 thoughts on “raspberry beret, i think i love her”