Did I really hate brussels sprouts while growing up, or did all the American TV shows and movies I watched with feverish fervour make me think I didn’t like them? Well, I’ve already asked that question here when I blogged about Ottolenghi’s Brussels Sprouts with Tofu, and as it does not behoove me to repeat content, I won’t, and will instead just direct you back to that (although the long story short answer is: kinda the former, kinda the latter.) Anyway, where I’m going with this is that it’s no great revelation to announce that people are generally suspicious of brussels sprouts, and I believe this usually stems from people – or more specifically, people’s parents – having zero knowledge of what to do with them. And so they did what you did with all vegetables back in the day: boiled them. Boiled them till they were formless, flavourless, unloveable and interchangeable. 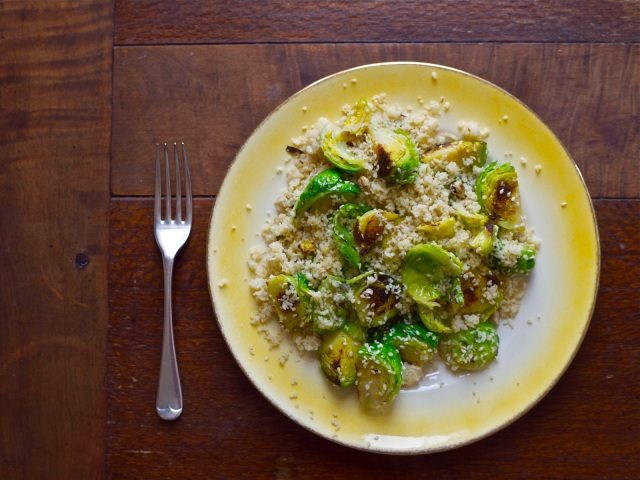 What you should really be doing with brussels sprouts is frying them or roasting them. No longer are they bitter, flappy mini-cabbages of sorrow. Instead when applied to direct heat or when blasted under a hot oven, they become crisp, wonderfully nutty, crunchy, and deeply delicious. Not only nothing to be scared of, but something to eat much of. 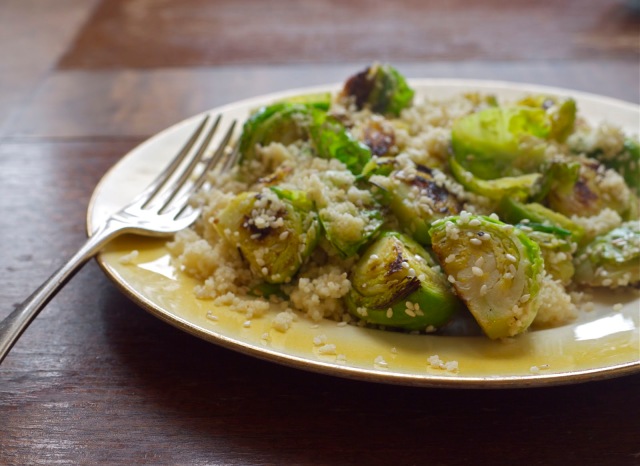 The reason I’m currently so pro-sprout, is because I am in the middle of testing a million recipes for my upcoming cookbook (which is, in itself, an intensely delicious thing to say out loud, well on paper, well on this screen, anyway) and the things I’m testing right now are largely within the genre of cake. We are surrounded by cakes. This is fantastic. However, I enjoy a little contrast, and my tastebuds have reacted to all this cake by craving intensely savoury food. Hence why I made myself this for lunch yesterday.

This is more a suggestion than anything. I like cardamom’s eucalytpy-lemony bite, and I just had some cooked couscous in the fridge. You could use whichever spices you please, and mix it with rice, or bulgur wheat, or quinoa, or anything. But let’s suppose you do have these ingredients – here’s what you’d do.

Trim the bases from the sprouts, then quarter them lengthwise. Heat about 1 tablespoon of olive oil in a pan, and throw in the sprouts and the cardamom seeds once it’s hot. Push them round so that one of the cut sides of each quarter is facing down on the hot pan. Place a lid on top and leave for a couple of minutes. This will allow the sprouts to fry and crisp up slightly, while also steaming them a little too, to actually cook them. Remove the lid and stir around – they should be considerably browned in places. Throw in the couscous and sesame seeds and squeeze in the juice of the lemons. Stir around to combine, then tip onto a plate. 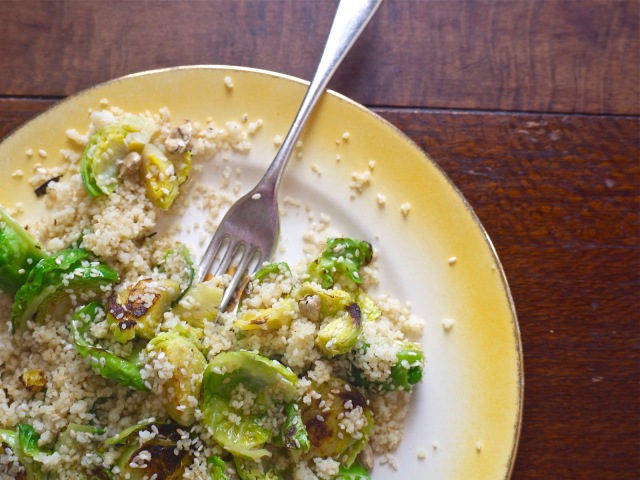 It might not sound like much but it’s a pretty perfect lunch, full of crunch and warmth and nutty deliciousness. And after eating it, I’m ready to face the cake again.

Bernadette Peters, spookily ageless, always tears-inducingly good, singing No-one Is Alone from Into The Woods. Whether or not it’s true, it’s nice to have her sing it to you at least.

13 thoughts on “too much of something is bad enough”