September 28, 2012March 11, 2020
As the late, always-makes-me-cry-so-I-can-only-listen-to-her-occasionally, great Laurie Beechman sang in the original Broadway production of Annie: “NYC, I give you fair warning: up there, in lights, I’ll be.”
I also give YOU fair warning: Tim and I have a plane to catch in less than two hours. All the tasks and jobs and endless succession of things that needed doing pushed this necessary blog post further, and further, and further back, till suddenly I’m typing really fast and realising that I haven’t had breakfast but I have had two coffees and I still need to finish packing.
With that, please allow me some self-indulgently breathless bullet points. I’ll try to make them wordily eloquent bullet points though.
– I handed in my cookbook manuscript. It made me feel a bit like this: 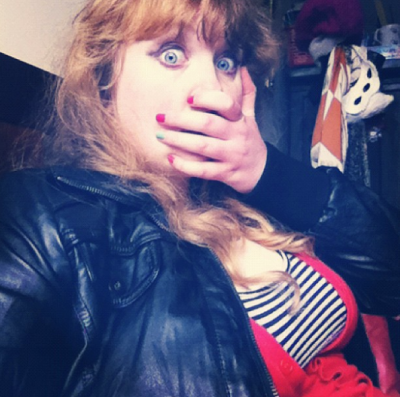 This cookbook has been my life for the last three months. Frankly, it has been my life since I got the email from my publisher back in January asking if I was interested. Franklier than that, it has been my life for a much longer time, it just didn’t realise it yet. Or something. It’s so strange not to be working on it – a little bittersweet and empty, a watermark left from a glass of campari on a table – but my flipping gosh it’s good to have achieved it. I feel like I climbed a huge mountain, only way better, because there was no actual mountain-climbing involved. My creative team of Jason, Kim and Kate (plus project-manager Tim) were utterly brilliant to the last. I’ll be full of more details about the book itself as the process goes along, but for now: I’m just going to enjoy not thinking about it quite so hard.

– Here is some pasta I made. It’s a very specific recipe, based on there being almost no food left in the house because we’re leaving for a month, but also some foods that really need eating. I like bowtie pasta because of its rakish, eyebrow-wagglingly charming shape, but use whatever, of course.

A recipe by me. Serves one.

While the pasta’s cooking, melt the butter in a pan and allow it to properly sizzle and burn. This will give you marvelous depth of flavour. Tip in the paprika, and stir, followed by the almonds. Continue to cook a little longer till the almonds are coated and lightly browned. Remove from the heat, tip on top of the drained pasta, and blanket with any kind of garnishy greens.

This is simple, yet highly delicious. Nutty, saltily fulsome butter. Smoky, intense paprika. Crunchy, lightly scorched almonds. The greens aren’t really that necessary but the paprika tints the butter dark orange and it does have connotations of engine grease. If I wasn’t photographing it I probably wouldn’t have bothered, really.

– Dearest Jo made me this amazing and delicious cake to say congratulations for finishing the book. It’s appropriate because I have SO MANY feelings. We ate it, along with waffles and other important breakfast foods, while watching the new season of Parks and Recreation. Did I say feelings? FEELINGS. 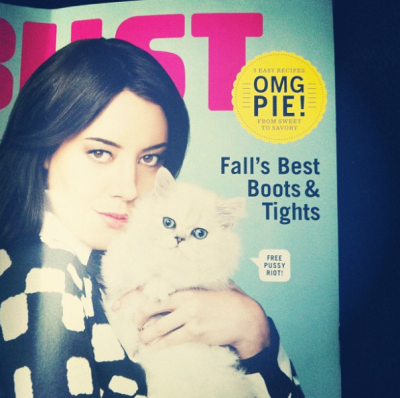 – Speaking of Parks and Rec, a pie recipe of mine is featuring in the new edition of BUST magazine, which has the clever and hilarious and stunning Aubrey Plaza on the cover. BUST is an American magazine, even, so just try to calculate how blown my mind is right now.

5 thoughts on “and we walked off, to look for america”