October 17, 2012July 24, 2018
Well hello there! I’m writing to you from Treme in New Orleans. I am so excited to be here, it’s kind of a good thing that the all-powerful heat here is forcing me to slow it down a notch or I’d be high-kicking with joy all over the place. We only just got here today, and we still have a whole week in this city up ahead, so there really is no need to rush. And may I remind you that if you’re interested in following our intermittent updates, Tim and I have a travel blog thing going here. Meanwhile, for you all, my second guest post is from Coco Solid, a talented artist work I’ve admired for aaaages, and by way of cherry on top she’s a really congenial, cool, nice-to-run-into-in-the-street person. It’s an honour to have her words here on my blog, once you’re done reading I totally recommend you go see her site (and spend a creepily long time reading through her blog archives) and also check out a sprinkling of her music as part of Parallel Dance Ensemble and Badd Energy – for starters I recommend Turtle Pizza Cadillac; Third Eye, and the greatest music video there is, no contest, Weight Watchers.
_______________________________________________________________________
Food is bomb. I don’t hate on food photos like many of my friends. I think it’s cool when someone has food to start with and that we are culturally honouring it more. Food psychology has become more enthused and amateur in recent years which has implicitly contributed to varying degrees of body-positivity and acknowledging the creativity of domestic life. Yeah, I think being engorged in chef elimination shows is a bit weird but it’s pretty educational viewing. (I wonder why there isn’t a violent version of Master Chef called The Real Hunger Games yet? Desperate television exec reading this – you’re welcome!)
I like to meld the ease and lovability of junkfood with the spiced considered effort of the flash. Context, my apartment is tiny ie. my desk is wider than my kitchen bench. I am also one month out from handing in my thesis. This statement reveals two things: I got f*#k all money and f*#k all time. But I was raised to respect your meal to the maximum of your abilities. I always make sure to serve the pedestrian as flamboyantly as possible. Major example: Ramen.

Ramen is seen as the barren fuel of the after-work slob, nihilistic teen or shelf scanning stoner. One (rude) individual could suggest I’m a mash-up of all three – the difference being I was lucky enough to roll deep in South Korea and Japan, where I was schooled on its possibilities. Infact I think this is the very ramen that flipped my script.

Tokyo 2009 at a ramen-only restaurant. After that I realized what I knew was merely the bed, we in the West treat noodles like the honeymoon and are ripping ourselves off.
So in this ramen I made, it wasn’t from a packet. I’m a Trident, Maggi, ‘zap a foam cup and add a packet’ kinda girl too but if you have the ingredients and time you might as well pimp out your bowl and get sustained in the process.
I made a simple soup with spring onion, ginger and miso paste. I put in some Japanese noodles. This concoction is not only nicer and healthier but it’s architecturally more stable than a packet job and can withstand the accessories I pile on. NB: worst food photographer in the world, I make these packets look like a gothic theatre production about Jack the Ripper.

If you have a keen eye you can see some garlic chipettes and a yellow oil atop the broth. This is a fantastic Burmese Garlic and Tumeric oil that one of my culinary idols makes. You can see the recipe here at Perfect Morsel.
I also make sigeumchi namul, a Korean spinach side-salad that rulz.

This was one of my favourite Banchan (side-dishes) in Korea so I learnt how to make it. Basically you put spinach in boiling water for 30 seconds, squeeze it til it’s semi-drained, chop it up and add it to a dressing of spring onions, soy sauce and sesame oil and whatever you like. The only beef I have is that it compresses four massive bunches into one medium serving (and then I skull it all) but here’s a supercute video of how to explain it.
After I had made the sigeumchi namul I kept the water boiling and put in two eggs which I add last as I’m curating my masterpiece lol. I also have Kimchi in there. You can get this from your local Asian supermarket. If you don’t know what I’m talking about kimchi is spiced and fermented cabbage, radish and assorted pickled bombs. It’s Korean, hot and amazing.

Then I added some sweetcorn and a knob of butter which is something I scabbed off Tan Popo, my favourite ramen place in Auckland. And then voila! You are supposed to add meat, tuna, fish but I thought this enough. Especially because my mate Greg came over and after chanting down Babylon we made….
MUTHAF*@#KIN SMORES
This is an easy campfire American stoner staple that I thought I’d throw in (Laura being in the US and all!) Lately I realised not many people in Aotearoa are down. People! Get down!
All you need: marshmallows, chocolate and the trick – Graham crackers 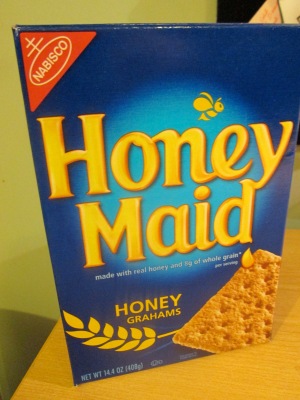 These US puppies are sturdy honey biscuits with the resolve of Digestives. They also chill the hell out of the sweetness and in a weird way steal the show.
Step 1: Put chocolate and marshmallows on one half of a Graham cracker

Step 2: Put these in the oven until they are melty and mangled

Step 3: Drop the other half of the Graham cracker to make a sandwich 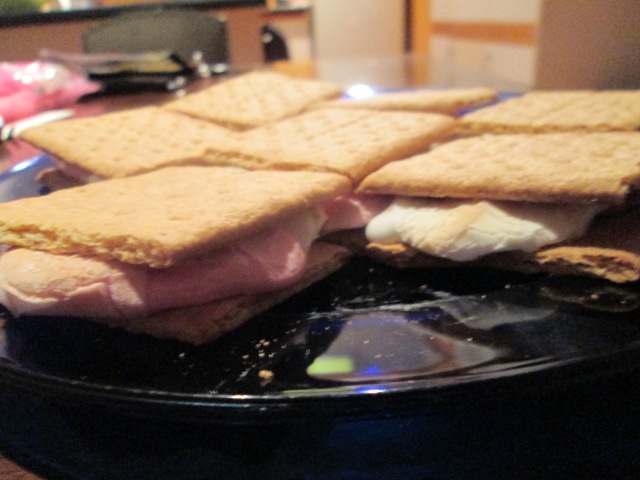