Who am I, anyway? Asks Paul in the opening number of the wondrous musical A Chorus Line. I’ve been wondering the same this week. I guess it’s not surprising that lots of people go to the gym in January – if headlines in certain women’s magazines are anything to go by, there is literally no other choice of resolution for your new year – but for me it’s not so straightforward. As I said in my last blog post, I want bufty arms this year. I want to be able to lift things without making an involuntary “nghghghhh” noise and straining my neck. A month’s free trial gym membership came to my attention. It all made sense to sign up and try some classes and so on.
Without going too deeply into my long and complicated history of just being myself, I will say this: until very recently it was difficult for me to reconcile doing exercise with general enjoyment and feeling good. Exercise to me was either compulsory institutionalised punishment (PE class ahoy!) or self-enforced to burn maximum calories for as long as I could stand it. (I completely understand and appreciate that PE/gym class is really enjoyed by lots of people, and also that wanting to lose weight is a personal choice and exercise is a way of doing that.) To me, exercise was all tied up in unhappiness and distress. It was all very black and white. Interestingly, my years of dancing sat outside of exercise in my mind – that was to music, and telling a story, and using expression and emotion and acting. And fun. That running or cycling or punching a boxing bag or playing, I don’t know, football, could fulfill that same function for someone else – I couldn’t make that leap of understanding.
So anyway, as a result I was nervous about going to the gym, having never been to one before – what if I’m useless? What if I get panicky? What if it’s really cliquey and my pants are wrong? And…what if I forget that I’m just here for enjoyment and to get strong? Does that make sense? But in fact, it was fun challenging myself, and I had friends there beside me, and I felt comfortable pausing when my legs simply refused to lunge once more. And this morning my muscles were constricted and sore, but in a good way – reminding me of all the effort I put in yesterday and how bufty they’re going to be soon. Nevertheless, I found myself tweeting things along the lines of “going to the gym, who am I?” as if to reassure myself…that I was still myself. But who else could I possibly be.

If you’re seeking a small challenge yourself, maybe this ice cream could be it. A calm, easy recipe which makes just enough for one or two people, depending on whether or not you want to share. (I don’t really like to share, but Tim lives riiiiight here in the same house and it would’ve been a bit weird not to. Plus, sharing leads to compliments on your cooking abilities! Which is probably not the main reason you should be sharing things.) This is good if you’ve never made ice cream before and want to start small in case it all goes horribly wrong (it won’t, though.) Or if you have made ice cream before but have a tiny tiny freezer. Or if you only have a small amount of ingredients to hand and don’t want to go to the shop. Strange as it seems, there are a number of situations where a small quantity of ice cream can be just as advantageous as a large quantity.

Makes around 300ml. Am not very sure how well it would double – maybe if you’re feeling more ice-cream-confident, search through all my recipes on this blog for one to make, hey hey?

250ml (1 cup) cream
50g dark chocolate (I use Whittaker’s. Because I love its flavour like no other.)
1 tablespoon cocoa
1 tablespoon sugar
1 egg

Gently melt the chocolate and cream together in a pan on the stovetop, or gently microwave the chocolate in the microwave and then stir in the cream. Either way, go slow, because chocolate burns quickly and will go all gritty if it happens. The ice cream will still be fine, but…gritty.

Remove from the heat and stir in the cocoa and sugar. Which give it a further depth of chocolate flavour, and a little bitterness-counteracting sweetness.

Break the egg into a bowl and mix it up with a fork, so that the yolk and white are all incorporated. Stir in a tablespoon or two of the slightly cooled chocolate mixture, mixing briskly. Doing this allows the egg to absorb some of the heat of the chocolate mixture and blend with it thoroughly – if you pour in the entire pan of chocolate, you might not be able to mix it fast enough to stop the egg being cooked by the heat of the liquid. And that would taste nasty. Anyway: pour in the rest of the mixture, mixing continuously. Then divide into two freezer-proof bowls, or one small container. Freeze till quite solid. If you freeze it overnight, it’ll need to stand on the bench for five minutes or so to soften a little. Being so small, it does freeze quite quickly though. Yay! 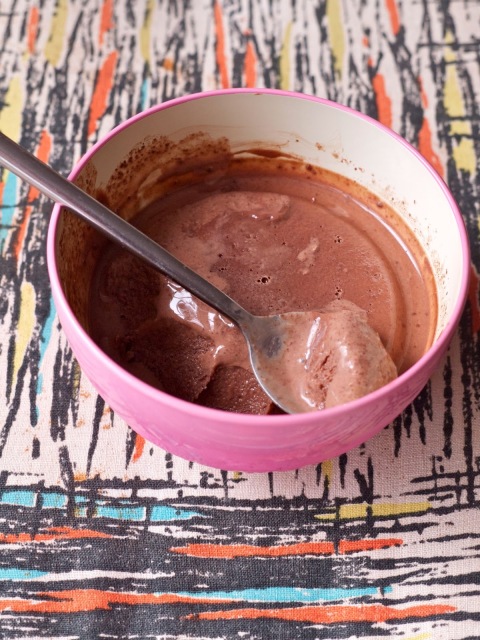 The path to success here is very short and simple: this chocolate ice cream just tastes like chocolate ice cream. A little cocoa-bitter, a little sweet, creamy and very cold. And, as I found out this morning, it makes a really good breakfast.

Who am I, anyway? Am I my resume? sings Paul in A Chorus Line. As well as getting used to the fact that I am now a person who goes to the gym because it makes me feel good and strong and stuff, I’m also trying to settle my brain down from racing at a hundred miles an hour. Because my brain does this cool thing where it simultaneously tells me I’m amazing at what I do but also not achieving anything much at all and no wonder. And I tell Tim this and he says “You have a cookbook coming out later this year!” and I say “yeah…but…” It’s like the opposite of resting on your laurels. Instead I run towards my laurels really hard and then leap over them and keep running for the next one so fast that the last one seems like it’s miles behind me in the dust. Resting on your laurels is a phrase that tends to be thrown around in a negative way, but to me it sounds kind of delightful – like, I achieved something good so I’m going to relax now and take a nap and maybe remind people about the thing I achieved occasionally. Does anyone else do this? Also, I guess, if anyone has any laurels they want me to not rest upon, let me know!

Ella Fitzgerald, Mack the Knife. Specifically, when she sang it in Berlin and forgot half the words, but elegantly and sorta adorably improvised over the top of the melody with her usual breezily gorgeous voice. What a champ.

Sherie Rene Scott, Goodbye Until Tomorrow, from The Last 5 Years musical. This song always makes me feel pretty emotional. I adore SRS, but absolutely cannot wait to see what Anna Kendrick does with this when the film version of this show comes out.

8 thoughts on “love is just a dialogue, you can’t survive on ice cream”