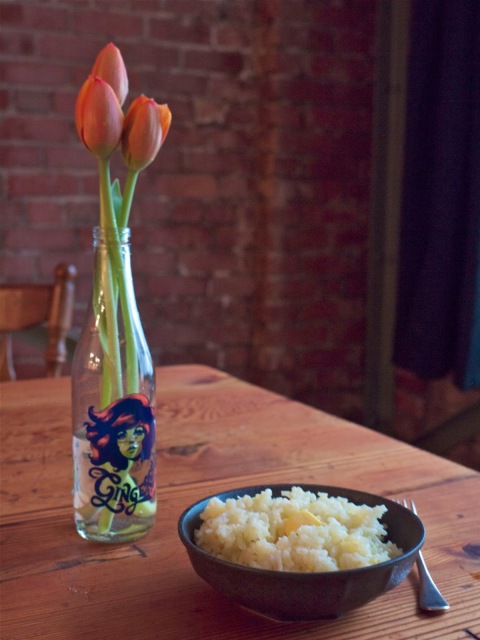 Tulips holding up well. As is my twee agenda, it seems.
Also holding up well: this risotto recipe. I’ve made it three times in the last week. Once, twice, three times a lady recommending this recipe to you all. I know I often go on about how I work myself down to a nub writing this blog and the cookbook and meeting other various deadlines, but that aside, I’m really very lazy. If there’s a way I can do less than what’s required, even at the expense of the outcome, I will. It’s just the way it is. Some people accept that there’s hard work involved in life, some people (me) want to sit around and knit or check Twitter all day. Fortunately for me, Tim tends to meet this laziness with shrugging resignation/lifting/cleaning of all the things, but occasionally it works out well for both of us. In the case of this risotto, that is. I already love making risotto, with its calmingly repetitive stirring motion, and I don’t mean to sound like Troy McClure, but sometimes I want to take an already pretty easy thing and make it even more flagrantly low in effort. And not only does this make enough excellently delicious risotto for dinner and then a non-bleak lunch the next day (in your face, instant noodles!) it also uses only one dish. So, less dishes for Tim to do, or for him to rinse and then put in the dishwasher (I can’t comprehend how we have a machine to do the dishes for us but still have to pre-wash them, hence why I never do it.) I’m not trying to be proud of how lazy I am or anything, in fact I’m too lazy to expend any feelings over it whatsoever. Kidding! On the one hand, I feel like “why should naturally helpful, good people in society be celebrated when I can’t help being this unhelpful” and on the other hand sometimes I am just being a dick to see how much I can get away with not doing.

Back to the risotto, you wouldn’t necessarily think a version that you just shunt into the oven would work, since it’s the constant stirring of it that slowly releases the starch from the rice grains and gives it that soft, collapsing texture. But somehow it does, and frankly I don’t care to question why. It just does. The first time I tried this I simply stirred some herbs in and topped it with a little Whitestone Butter by Al Brown Manuka Smoked Butter that arrived in the mail because that’s right, I have the veneer of a fancy food blogger (as always, I wish I could tell my much younger self that this would happen, as something to cling on to and look forward to.) I’m not just saying this because I got it for free (I mean, in a roundabout way I am, but I would never lie to you about butter, okay?)  this butter really is quite incredible, the manuka smoke somehow making it meatily rich while the texture is dissolvingly creamy and light. It’s the ideal substance atop a very plain, but perfect risotto. But regular butter and plenty thereof is also always the right choice, too.
Oven Risotto
Adapted from a Donna Hay recipe. Makes plenty for four, or in our case, for two people and then two lunches the next day.
2 cups arborio rice
2 teaspoons vegetable stock powder
1 tablespoon dijon mustard
5 cups water, of which up to 1 cup is white wine
Optional: fistfuls of butter, lemon zest and juice (especially if you don’t have wine), herbs. I guess the mustard is optional too, but you want this to taste like something.
Set your oven to 180 C/350 F. In an oven dish – around 2L capacity – tip in the rice, the wine, the water, the mustard and the stock powder. At this point I also dice up plenty of butter and add that in too, but if you don’t have butter or can’t eat dairy, I would lavishly drizzle in some olive oil.
Cover the dish tightly with tinfoil, then bake for around an hour. At this point, you can stir in more butter, some lemon zest and juice, some herbs, some cream, parmesan, whatever, really. For this I grabbed a handful of chives and thyme leaves, since that’s what I had.

However, it also lends itself well to not being utterly plain. I made a glossy pink roast beetroot version of this – sliced up beetroot, roasted in plenty of olive oil, before adding the rice and liquid and baking. Last night I made a roasted parsnip version, with so much butter that the rice itself couldn’t quite absorb it all. It basically turned to nutty, caramelised paste. And was really wonderful. But uh, if you want to make your own, just bear in mind that it can only absorb about 150g butter before it starts heading paste-wards. 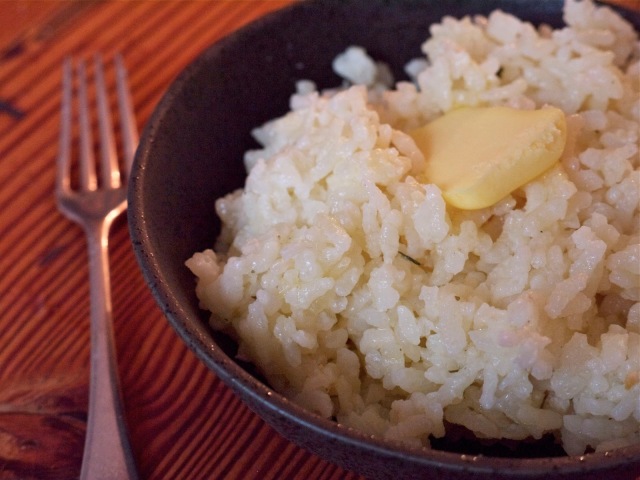 Some other cool things of late, in order of most to least of what I thought of first to write about:
Am quite obsessed with knitting. It’s so calming, and repetitive. A bit like risotto, but you don’t have to stand up to do it!

On Friday I went to a secret party to celebrate ten years of Creative HQ. As with receiving butter, occasionally I get to go to A Thing. Tim and other friends were also there, and it was really quite an amazingly surreal, and just generally amazing night – fancy beer, a dance troupe, green screens, dry ice, a photobooth, a glitter cannon, pretzel sticks, chocolate schnapps. It gave me lots of good ideas on how I want my life to be (more glitter cannons! And pretzel sticks! And dance troupe-ing! And everything I just said, really.)

And today a really wonderful-for-me thing happened: I had my first story ever published in Cuisine magazine. I’ve spoken so often of how much I love this magazine and I won’t go on about it too much in case anyone from said magazine happens to read this and gets distinctly weirded out, but: I adore this magazine, and have been an avid reader of it since before I even knew how to cook. The fact that I have a story in there is a very big deal to me. The story itself is a piece on Treme, New Orleans, and the sights and sounds and eats therein, based on the time Tim and I spent there last October.

8 thoughts on “lazy jane, all the time”