July 26, 2013July 24, 2018
I’m starting to run out of ways to defensively begin this segment, so perhaps you should just read all the previous ones I’ve done for the full picture. In short: I sometimes get invited to things, and instead of bashfully pretending nothing happened in case everyone hated me for bragging, I decided I’d challenge myself to write about them instead. In a way that doesn’t make people hate me, but instead find out more about cool events or happenings or developments in the world of the food world. I named this segment after a quote from Jimmy James of the utterly excellent 90s sitcom NewsRadio. Because I love him, and also, it would seem, oblique titles. 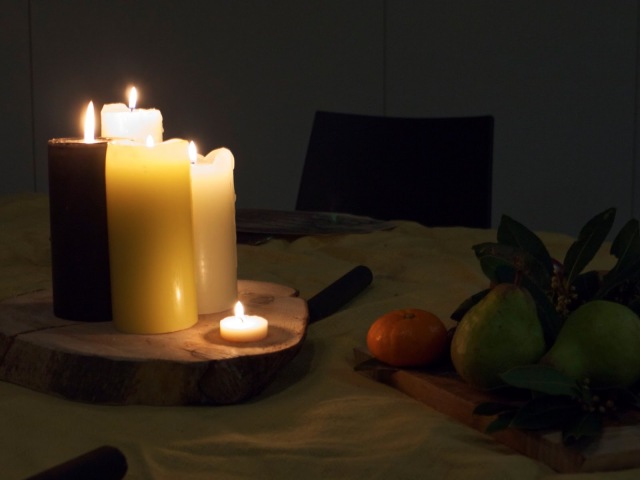 So, here the thing: I was invited to CQ Hotel’s Midwinter Medieval Banquet. Tim was happy as ever to be squired along also.

The pitch: CQ Hotel was holding (the first of what they hope becomes their annual) a medieval banquet, the ruse being that everyone had to wear costumes and no-one was allowed cutlery. I do enjoy a good ruse, and also the chance to dress up. Tim and I went to this last week, but between earthquake-sleeplessness and after-work busy times, it’s only now – on a sick day, of all days – that I’ve found myself with enough time to recount the evening. 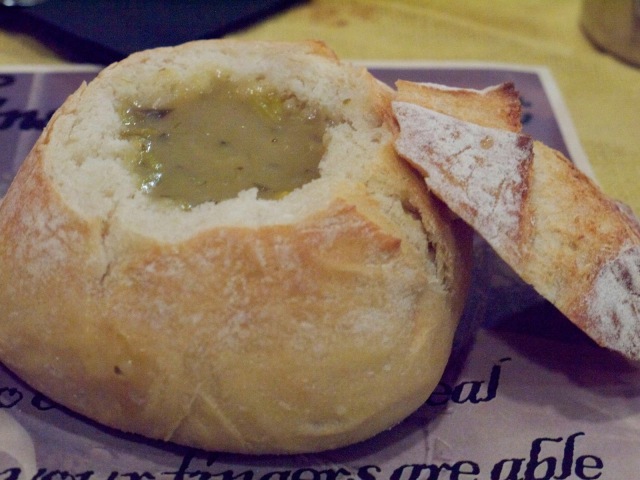 What happened: Tim and I (he in this draped black creation that made him look awesomely sinister, I in this long gold dress I found in my closet that seemed suitable enough) were listed on the seating plan as The Minstrels of Vincent, which pleased me greatly. On account of his being referred to as Mr Vincent at another dinner we once went to, in front of a large crowd. The banquet was held in one of CQ’s conference rooms, and the table was wonderfully impressive – covered in sackcloth, dotted with wax and stains, with candles grouped on slabs of wood with fruit and leaves. Soup was brought out to us, but the accompanying spoon was the last time we got cutlery – after that, generous piles of food appeared and we simply had to reach for it and eat it. The menu ran like so:

Impressive, yes? I admit, less impressive are my photos of the evening, due to the authentically low lighting – imagine how hard it must have been to be a food blogger in actual medieval times, though! (Not to patronise you, but in case you emitted a horrified gasp, I do know they didn’t have food bloggers back then. Why, it wasn’t mainstream till Edwardian times! Okay, I don’t even know where I’m going with this joke.) 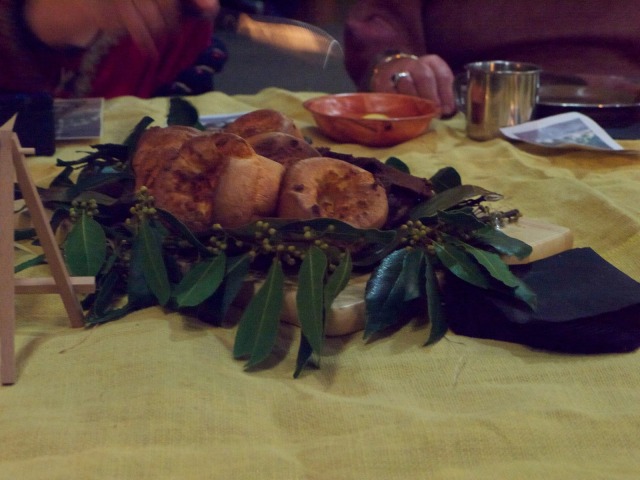 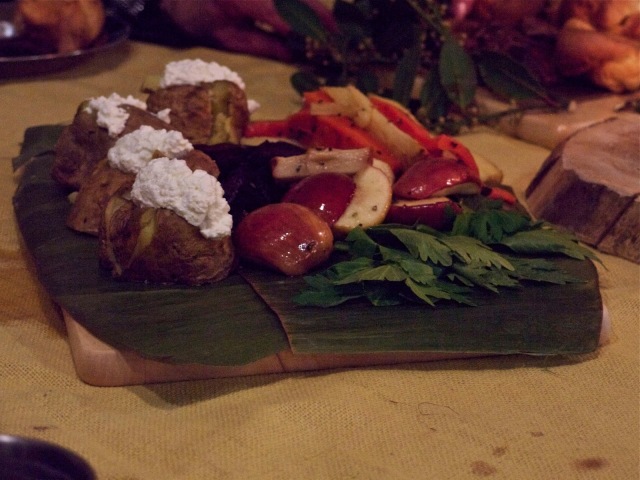 The coolest bits: Look, dressing up and waxing medieval requires some suspension of sensibilities, which luckily comes very easily to me. Maybe we’ve been watching a lot of Game of Thrones, but it really was hugely fun to be wearing ridiculous clothes and tearing apart meat with our bare hands (thank goodness for the finger bowls.) And the food, dumped unceremoniously on the table by our servers – in keeping with the theme, not because they’re actually bad at their job, I hasten to note – was just excellent. So good that I was almost thinking I could’ve handled living in Ye Olde medieval times, until I reminded myself about things like stretchy fabric and feminism and Instagram and penicillin. The meat in particular was perfection. Enormous ham hocks, stickily salty and ridiculously tender, beef that fell to pieces, richly garlicky chicken. The vegetables, tender and caramelised, were studded with caraway seeds and provided necessary cut-through to all that rich protein. It was all just so, so good.

Probably the only thing that didn’t sit right with me was how the staff serving us were referred to as ‘serving wenches’ – something like ‘minion’ would’ve sounded medieval but not been so awkward? But that aside, the staff themselves were great, throwing themselves into the theme with varying levels of aplomb, and kept everything moving along calmly.

I am terrified of audience participation, so didn’t take part in the dancing that ended the night, but it was certainly a nice way to wrap it up, watching people do-si-do-ing to Greensleeves while I nibbled on wonderful spiced pumpkin pie, pleasingly sharp lemon tarts, and welcomely clean, crisp melon slices. 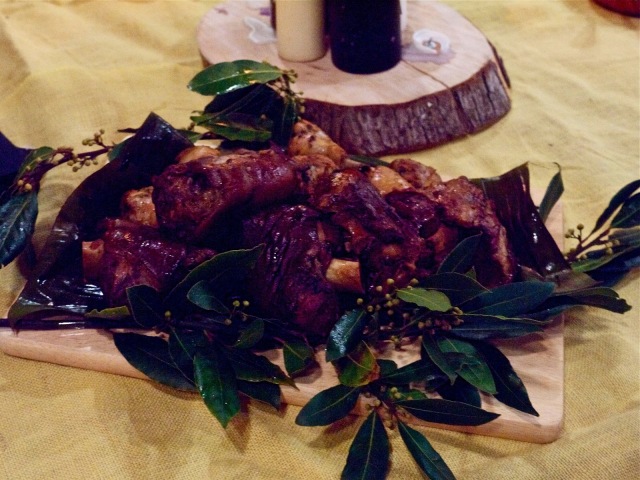 On a scale of 1 to Is This A Dream: This edges towards a 7. Not that it wasn’t a wonderful and extravant experience, but more because it was really quite surreal and literally dream-like, wearing flowing robes and tucking into food with one’s hands and drinking wine from metal flagons and so on. 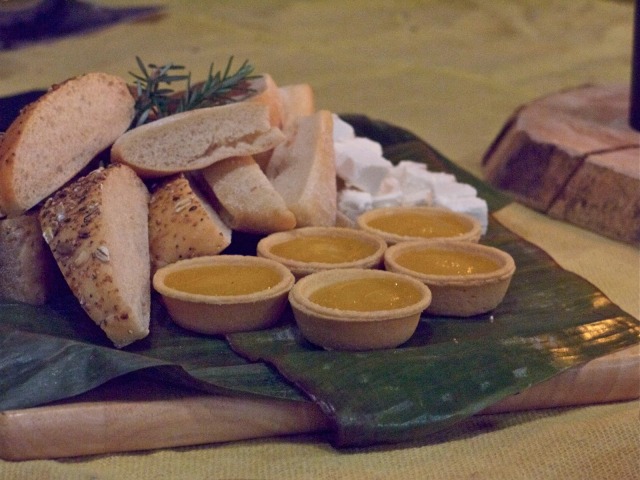 Would I do this for not-free? We had a really fun time at this dinner. I do suspect though, and I’m not just saying this to try make myself feel more relevant, that it’s the sort of thing that might have flown under my radar if I’d simply seen it on a list of upcoming events. However, if I’d read someone’s account of it – oh, say, like the one I’m writing right now – I’d be a lot more interested. I certainly recommend keeping an eye on the CQ Facebook page for any upcoming events though.

4 thoughts on “fancy plans and pants to match: medieval banquet at cq hotel”