Depending on what angle I look at it from, I have either had a terrible or a lovely week. Yes, I did faint at the gym, acquire a bellicose case of bad brains (you know, feeling down), get carsick, have very broken sleep every night, bite my nails too much, and have my laptop break down at lavish expense one week after our car did the same. And we’re still not allowed a pet cat, which hurts my heart so (this isn’t news, but I still feel injuriously inclined to bring it up occasionally.) But I also went to a restaurant opening and mingled with nice people and had cool cocktails, drank lots of coffee with Tim, had a swell Saturday night drinking beers with friends, read two novels (Scoop by Evelyn Waugh and Orlando by Virginia Woolf and yes I would like to talk about them), went to book group, saw a tragic French film with a friend and went out for yakitori afterwards with her husband and Tim, saw two further tragic foreign films with Tim, and made this sugar-cured salmon very successfully for Sunday’s dinner. I was resigned to the salmon perhaps inevitably failing, at least, it wouldn’t have surprised me after the week I’d had. But it worked, just how it should! I did, however, screw up the risotto that I’d hoped would accompany it. Like the universe was saying “you’re still you”. But then I decided that the risotto would’ve been too rich anyway, and the bulghur wheat that I hastily cooked up instead was a much better accompaniment, and we had the risotto for lunch the next day, like I was saying to the universe “how you like me NOW (please don’t drop an anvil on my head)” 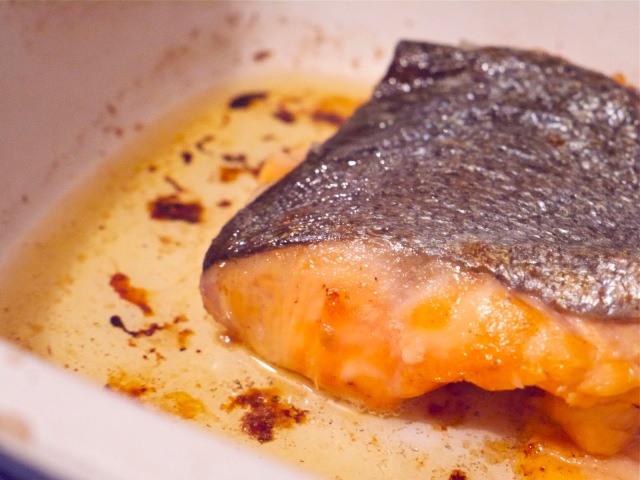 So yes, the sugar-cured salmon: it worked. And it can work for you, too! It sounds really fancy but there’s really nothing to it, which is something I rather like in a recipe. I found this recipe in Kinfolk magazine, which is this beautiful publication full of beautiful people living beautiful, instagrammable lives. The juxtaposition of intimidating-sounding title and very straightforward method rather appealed, and also I just don’t cook fish as much as I ought, considering how it’s so fast and can handle so many different flavours and makes your hair shiny.

I was a little concerned that the sugar would seep too far into the fibre of the salmon and I would end up with dinner that thinks it’s pudding, and tastes like neither. Luckily it simply tasted…wondrous. You sit it in some salt and sugar (and I added a pinch of mustard powder, which I couldn’t taste in the slightest by the end so you do what you like) for a couple of hours, shunt it under a hot grill for single digit minutes, and then suddenly you have tender, satin-rich salmon, which has the barest hint of sweetness to it and a kind of rounded mellow juiciness, and that’s all. A little more sugar got caught in the butter that I added before I grilled the salmon, but bizarrely it tasted kind of amazing once it had caramelised and didn’t overpower it with sweetness at all.

adapted from a recipe from Kinfolk magazine by Tara O’Brady and Nikole Herriott. Thanks for the inspiration, Tara and Nikole! Salmon is so rich and oily that I can’t eat too much of it, so this amount was perfect for two of us. But adjust quantities to suit.

250g salmon fillet, skin on. Boned or not, it’s up to you. We went for bone in, as it was about ten dollars cheaper per kilo, and only came close to choking us about seven times.
A handful of sugar
two big pinches of sea salt (you only need the plainest sugar for this, so try to get hold of some fancy sea salt if you can, but if you can’t, just use a reasonable shake of salt for each side.)
1 teaspoon mustard powder (as I said, you can’t really taste it at the end. So leave it out if you like.)
Butter

Place half the sugar and salt in a bowl that will fit the piece of salmon, and lay said salmon skin down on it. Sprinkle over the rest, evenly. And the mustard powder, if you’re using it. Cover with plastic wrap and refrigerate for two hours.

Turn your oven to grill and let it heat up well. Take the salmon and carefully, briefly rinse it under a cold tap, patting dry with a paper towel. Place it skin side down in a roasting dish, dot with a little butter (maybe 25g?) and grill for about four minutes. Carefully flip it over, and grill for another two or three minutes. Serve, with or without ruined risotto as you please. 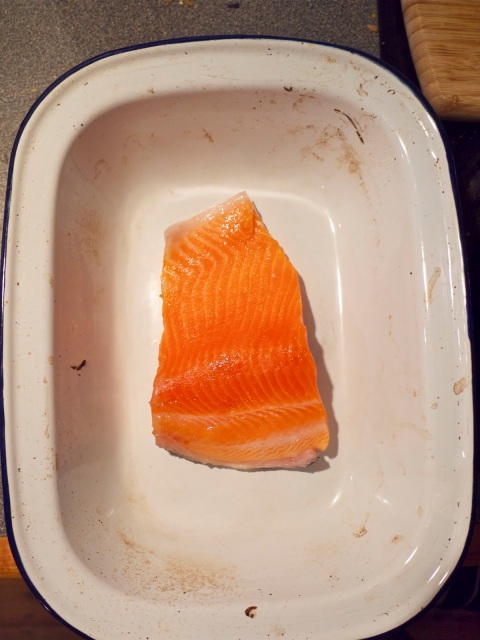 The salmon goes from brightly luminous orange to pastel pink as it cures then cooks. Like eating a sunset, you sybaritic creature you.

My life is instagrammable too? Also note the taco pickles, proving their worth as an ideal side for salmon. Also, the salmon’s skin goes crunchy and crispy under the grill and tastes excellent. Steal it all for yourself, if you can.

I’m not focussing too much on the laptop situation, which is possibly my brain going into a protective exoskeleton mode. Because if I really thought long and hard about every photo that’s on its hard drive and all the information scattered recklessly on the desktop that I stand to lose, and have to pay a lot of money to find out either way, I might cry. During the day, for hours. What I am focussing on is the other thing in my life right now: my cookbook is out on shelves on the 23rd of this month. It’s literally happening this month. It’s a real thing. Oh my. It’s so exciting, in a physical, heart-racingly, spine-pricklingly thrilling kind of way. It’s also very overwhelming. There’s so much to do! So much to organise! So many things to try and make appear out of nowhere! So much to just…take in. Most of it very cool. And so you know, because it is pretty interesting – I hope – I will be talking a bit more about the book over the next couple of weeks and how you can find it and perhaps how it can find you (I’m talking competitions, yo) and what you can expect from it and probably just lots more run-on sentences like this, really.

2 thoughts on “pour some sugar on me”