s’mores pie
I made this over the weekend to take to a Thanksgiving-y housewarming barbeque that some American friends were having. Thanksgiving isn’t my holiday (and let’s not forget that it has a troubling background of colonisation and oppression) but I love the food of America and so figured I’d try to improvise something fittingly flaming-eagle-on-a-clifftop-as-old-glory-waves to bring along. So: s’mores pie. There were some giant marshmallows left in the cupboard from the hallowe’en party, I have this amazing cookie-pie dough recipe that comes together out of almost nothing at all, and I had half a block of Whittaker’s dark dark chocolate to counteract the sugar-pillows of marshmallow with its bitterness. That’s it. cookie, marshmallows, chocolate. I had planned a whole lot more – custardy filling, that sort of thing – but in the end, s’mores really ought to only have those three main components. I’ve seen enough American TV to know that! 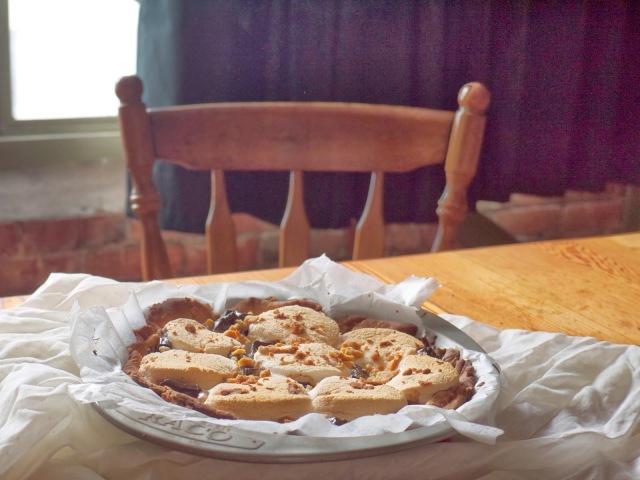 By the way, I’ve had no time to blog lately, which is why this has taken a while to get here. But today I woke up feeling horrendous, and inevitably/concerningly thought to myself, “ooh, a sick day! This is my one opportunity to finish that blog post!” So here I finally am, pie in hand, hand on heart, and head in hands, because there’s now pie all over me and in my hair.

If you don’t like marshmallows, well, this really isn’t going to change anything for you. Since that’s mostly what it is. But I myself, am strange and unusual, and don’t like them that much either. However, when they get gooey and puffy and sticky and smokily browned from the heat of the oven – excellent. Especially with the bursts of dark cocoa-embittered chocolate and the warm cinnamon from the cookie dough. Just don’t overthink it. (As if being told not to overthink something helps you not overthink things! Wouldn’t life be simple if that were the case.)

Stir together the flour, baking soda and powder, the cinnamon and a pinch of salt. Tip in the syrup and oil and stir together to form a rough, crumbly cookie dough (the texture may vary depending on your flour, the humidity, bla bla bla, so add a little more flour if it looks unmanageably damp, otherwise it’ll probably be fine.)

Reserving a couple of tablespoons of dough to sprinkle over the marshmallows, roll it out to a circle just larger than your pie plate (use one of around 21cm) and transfer it to said pie plate. I tend to roll out the dough between two sheets of baking paper, and then lift the entire thing up, place it in the pie plate, then remove the top layer of baking paper and press down the dough. That way there’s much less cleaning involved – of both the pie plate and your rolling pin.

Jab the pastry a few times with a fork, which will help stop it puffing up in the oven, and bake for around ten minutes, till golden and a little crisp.

If you have giant marshmallows, halve them and arrange evenly within the pie shell – otherwise just cram it with regular marshmallows. Roughly chop or break up the chocolate and tuck pieces of it evenly amongst the marshmallows. Grind over a little salt, and scatter with the reserved crumbs of dough. Bake until the marshmallows are puffy and a little browned  – about ten minutes. 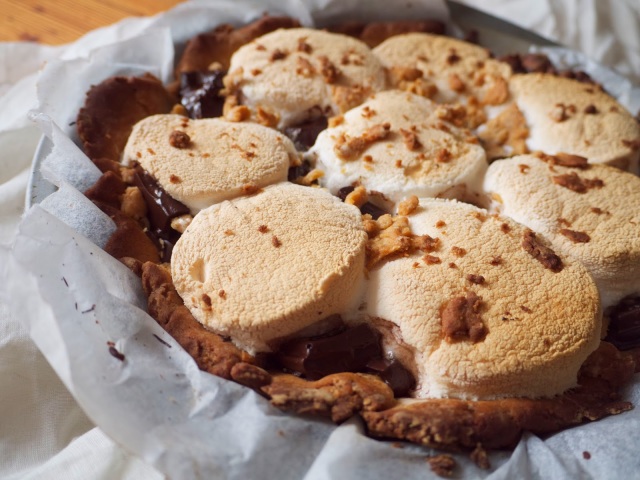 Surprisingly easy. It was dubbed “s’morestravaganza” at the party, and then “s’morepocalypse” and then I yelled out “s’mored of the rings!” and everyone laughed because you can always count on Lord of the Rings humour to be topical in New Zealand, since they have been making those films here for the last thirty years and will continue to do so for the following thirty years. Or at least that’s how it feels.

Pie aside, I was thinking those “where am I going with my life” thoughts, as I am wont to do every time my heart beats, and I have also been thinking a lot about my girl Nigella Lawson. Because she is so important to me and was one of the key people who shaped how I think about cooking, it seems right that she gets mentioned often when I have interviews about my cookbook and so on. I often bring her up myself, as an influence – but I was also thinking…

While I adore Nigella, I don’t want to be the next Nigella of cooking. There’s only her, and I could only be a diluted, carob-replacement version if that’s what I was trying to be. Nope. I want to be the Kanye West of cookbooks. The One Direction. The Mariah Carey. The Lorde. Kanye – he says some ridiculous things but makes so much sense and is all about his art and believing in his worth and generally being so brilliant that he can shoot down anyone who thinks he should keep quiet or be more humble. One Direction are so connected to their fans and recognise the ridiculousness of their situation and seem to just radiate fun and genuineness and also have a million gifs of themselves on tumblr, which I would love to have happen to me one day. Mariah Carey is flawless. But also very flawed. But also flawless. And Lorde – she’s such a young woman, and her words are different, and she’s not afraid to be clever yet simple, and she has amazing hair. So. Sounds maybe like I’m being toooooo ambitious, but I strongly believe in holding on to your instincts and flinging yourself at big ideas when they are kind enough to appear to you.

I’m sure you all feel so much richer for having read these musings I had about myself while like, washing my hair or painting my nails, but y’know. Look! Pie!

Angel Haze, No Bueno. I adore this person.

9 thoughts on “there are marshmallow clouds being friendly, in the arms of the evergreen trees”