halloumi for my roomie
First blog post from my new home! Despite being stridently anti-suburb my entire life, including when I grew up in a tiny rural village – I knew at the age of like, two months that I was destined to live in the city – I’ve adjusted faster than a bra strap to my new life in Newtown.
(My New Life In Newtown: the spin-off TV show from the TV show I already imagine my life to be.)
I live with my best friend Kate and her also-rad husband Jason, I am practically neighbours with another best friend, I’ve made friends with the guy who works at the corner dairy already – I actually nearly cried when he said “welcome to the neighbourhood, I hope you’re very happy here” but it had been a long day of moving house and I desperately needed an ice cream, so that may have had something to do with it. I live with Ariel the beautiful peach of a cat who I am slowly befriending, and my heart feels so full from simply having a cat around all the time. And I now have a super cool kitchen with a gas burner oven and natural light and a ton of general aesthetic cuteness going on! Yesterday I had my first go in the kitchen, by making halloumi and apple French Toast for Kate and myself.

fried cheese for my main squeeze

Microwaved Cheese and X sandwiches were a mainstay of my childhood eating (them, golden syrup sandwiches, canned spaghetti and two minute noodles) the most prominent being microwaved cheese and marmite, followed by microwaved cheese and tomato sauce (I know. But: pizza vibes!) One day after reading an American cookbook I’d got out of the library, I discovered the magical combination of cheese and apple together, and the sandwich-related part of my life was changed irrevocably. Something in the sweet, nuclear-waves-softened apple slices and the melting, nutty cheese tasted impossibly good to me, and while this isn’t surprising now – I mean, cheeseboards always come with some kind of fruit accoutrement, whether it’s fruit paste or crisp slices or just something fruity – at the time it was a pretty radical concept to my unsophisticated rural tastebuds.

So yeah, it was nostalgic thoughts of those sandwiches that inspired this brunch. Brunch is my favourite (well, breakfast eaten at a slightly later hour, basically) (that said I love breakfast any time of day, especially night) (I’m so fascinating!) and so it seemed a good way to break into the kitchen. 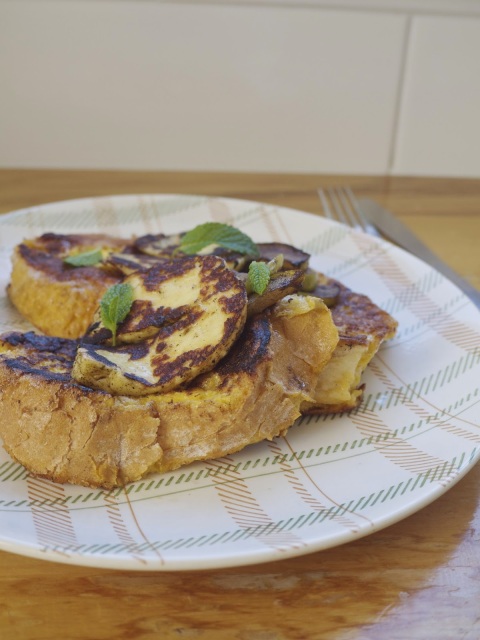 My nostalgia was totally correct – this was completely delicious. I mean, halloumi is boundlessly astounding, and the buttery meltingness of it went quite perfectly with the soft, caramelised sweetness of the apples and the squishily fried bread. Cool hits of mint livened it up a bit and made it look better in the photos, and as well as being a pleasure to eat, it was really quite straightforward to make. I mean, I felt a bit nervous promising a lush brunch, it being my first time in this new kitchen and a recipe I’d made up on the spot, but it emphatically worked. Cheese and apple! Together at last, again.

a recipe by myself/serves two

this will be easier and everything will stay hot if you make the French toast in one pan and the apple/halloumi in another, but it still worked fine all done quickly in the one pan. Up to you/your resources/ability to deal with doing more dishes.

Mix the egg, milk and nutmeg together until you can’t tell where the egg starts and the milk ends. Heat a pleasingly-sized slice of butter in a large pan until it’s sizzling, and then carefully dip the first two pieces of bread into the egg and milk, allowing both sides to soak up plenty of liquid. Transfer these to the hot pan and fry on both sides till very brown (I use a spatula/flipper thing to lift them up slightly to have a look underneath, it always takes longer to brown than you think it will.

Finely slice the apple while the toast is cooking – you don’t have to use the whole thing but more is better. I cut off one side and then slice that into semicircles, and then carry on all round the apple till it’s all used up. In case you needed to know that.

Remove the cooked French toast to a plate and repeat with the remaining bread. You may need to add a tiny bit more milk to the egg mixture if there’s not enough – that bread is absorbent stuff.

Fry the apple slices in more butter until softened, then scatter them over the two plates of French toast. Finally, briskly fry the halloumi slices on both sides till golden brown, put them on top of the apple-topped French toast, scatter with mint leaves, and placidly eat.

fresh outta rhymes, to your relief
Other cool things about the ‘burbs: I mean, first of all for all my righteous posturing, Newtown is so close to Wellington city, the two neighbourhoods are clasping hands with fingers lovingly intertwined. Also, there are local cats.

this is moustache cat, whose detectable personality traits thus far appear to be “lurks” and “poses obligingly”
I think I’m going to be very happy living here.
Oh, and: despite having too many projects and commitments for my laughably small hands to carry, I’ve decided to start a little web series. Emphasis on little. A few years ago I tried doing some youtube videos and I never really liked them, but did them anyway, but this feels a bit more fun and chill and low-key and me? Anyway, if you like eating food in bed then you might want to watch because that’s all that really happens. Normally I’m quite upfront about telling you if I think something I’ve done is amazing, so this isn’t false self-deprecation for the sake of it, but the video is really not that great. But it’s something! And that’s something.
title from: First Aid Kit’s quietly twinkly little tune Valse.
music lately:
Emily Edrosa’s self-titled EP. It’s all rumbly and moody and I love it so much and can’t stop listening.
Banks, Goddess. You shoulda crowned her, cuz she’s a goddess, you never got this. Really feeling Banks at the moment.
Mya, My Love is Like…Wo. Bedroom dance party perfection. And she TAP DANCES in the music video.
next time: omg I don’t even know but you can look forward to more photos with new interesting backgrounds and also me borrowing all of Kate and Jason’s super cool plates to put my food on!