My own xmas cake recipe. Boozy and nostalgically delicious, just like your, um, favourite food blogger used to make.

Well, I sniffed a pine tree and it did make me feel more Christmassy. I also watched Love Actually and once I’d stopped ranting at how horrible it is to its women characters, many of whom are barely, at best, one-dimensional props who exist only to help a man realise something important about himself (and those things they realise are usually “I like this hot chick rather a lot”) I did notice that in said movie, everyone keeps going on like, “well since it’s Christmas I’ll tell you the truth/finally acknowledge that I love you/run after you in an airport/generally make an enormous sweeping gesture at great risk to my reputation in the name of love.” Far be it from me to suggest that we should be inspired by Love Actually as such, but I am an all or nothing gal who enjoys a good solid enabling every now and then. Since everything is so ridiculous and high-drama and fraught at Christmas, you might as well make things more like this if you’ve got the inclination, y’know?

Candy Cane Bark: for those who want to put candy crush where their mouth is
Unsure quite where I’m going with this, I guess I just have a lot of feelings about Love Actually and also Grand Gestures. I’m honestly not in a delightful headspace right now, which is just neat because it coincides with me doing little in the way of actual blogging and everything in the way of rounding up for you, curating, if you will, a list of recipes I’ve already put on here that would make great Christmas present ideas. Aren’t I wonderful! I’ve done this for the past few years and logically it grows every time. I happen to be a staunch believer in the joy of giving and receiving edible stuff as a present, and so, if you feel the same this list might be of some use to you. Oh sure, you could go onto Pinterest or Buzzfeed or even go old-school and make a Google search to find a zillion such lists, but none of them are going to be as self-absorbedly devoted entirely to my own content. For…for what it’s worth.

Berry Chia Seed Jam: it’s almost too healthy, and there’s always someone that you have to buy for who digs that kind of description.
Worth noting that whether or not Christmas is a significant thing for you or passes you by completely, these are obviously all nice recipes for a present for anyone. For any reason, at any time of the year. Just because Christmas is the overwhelmingly unavoidable societal status quo doesn’t mean you can’t enjoy Candy Cane Bark in the middle of April.
Category One: Things in Jars.
Jars are cute. Jars are everywhere. Jars are gonna save you this Christmas.
Orange Confit (This is basically just slices of orange in syrup, but is surprisingly applicable to a variety of cake surfaces. And it’s so pretty. And so cheap.) (vg, gf)
Cranberry Sauce (this is stupidly easy and you should make it to go with your main meal anyway) (vg, gf)
Bacon Jam (Best made at the last minute, because it needs refrigerating) (gf)
Cashew Butter (vg, gf) (just don’t drop your wooden spoon into the food processor)
Red Chilli Nahm Jim (gf)
Cranberry (or any-berry) Curd (it involves a lot of effort but it’s so pretty. Just like me.) (gf)
Rhubarb-Fig Jam (gf)
Salted Caramel Sauce (gf, has a vegan variant) (I knowww, salted caramel is so boringly pervasive these days but a jar of it all for yourself is still the greatest thing ever)
Apple Cinnamon Granola (vg)
Strawberry Jam Granola (vg) Marinated Tamarillos (vg, gf)
Taco Pickles (vg, gf)
Pickled Blueberries
Peach Balsamic Barbecue Sauce (vg, gf)
Berry Chia Seed Jam (vg, gf) 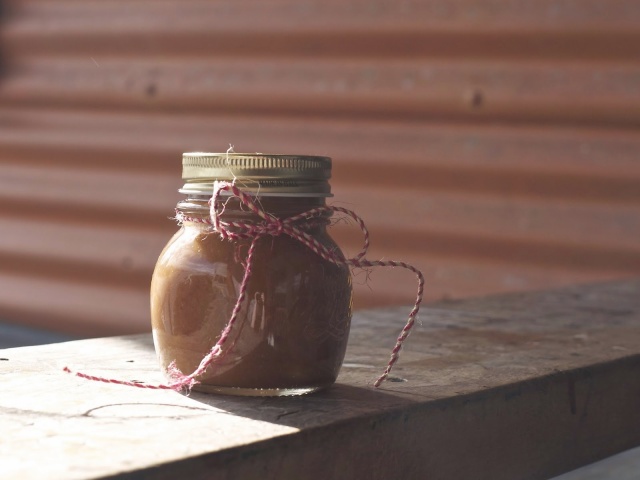 Peach Balsamic Barbecue Sauce: give a fusspot a pot of fussy stuff. And if anyone makes any calls about barbecues being the domain of men, kick them to the curb and enjoy some chargrilled goods in peace with this delicious sauce.

Make your house smell glorious, eat some cake batter, wrap the baked things you haven’t eaten in rustic-looking brown paper and tie it all up with string, then toast to your own productivity and excellence.

First of all, my Christmas Cake is amazing. It just is: deal with my lack of coyness. Even if you decide at the last minute to make it on Christmas Day itself, it will still taste so great.
Christmas-Spiced Chocolate Cake (Also a good xmas-day pudding) (gf)
Chocolate Orange Loaf Cake
Vegan Chocolate Cake (It’s good! It’s easy!) (vg)
Chocolate Chunk Oatmeal Cookies
Cheese Stars (make twelve times the amount you think you need because these are addictive and also great to serve alongside the inevitable copious liquor that happens this time of year)
Coconut Macaroons (gf)
Chocolate Macaroons (gf)
Gingerbread Cut-out Cookies (vg)
Coconut Condensed Milk Brownies
Salted Caramel Slice (hello again Salted Caramel! Your persistence is as admirable as your deliciousness!)
Fancy Tea Cookies
Chocolate Olive Oil Cake
Cinnamon Bars
Coffee Caramel Slice
Also, if you click on the link to the Orange Confit above, you’ll see a recipe for the easiest, fastest fruitcake loaf. It makes an excellent present, for the sort of person who’d like to receive fruitcake. And ’tis dairy free.

Mars Bar Cornflake Slice. I have nothing funny to say about this. Its deliciousness requires seriousness.
Category Three: Novelty!
This is mostly either homemade recreations of things you can buy from the corner dairy for fifty cents, or sticky-sweet things where you melt one ready-made thing into another. It’s frankly the best category and you know it.
Moonshine Biffs (like homemade Milk Bottles!) (gf)
Raw Vegan Chocolate Cookie Dough Truffles Candy (vg, gf)
Lolly Cake
Peppermint Schnapps (vg, gf) (this is some harsh moonshine but also SO FUN. Weirdly, more fun the more you drink of it?)
Candy Cane Chocolate Bark (No effort, vegan – well, I think candy canes are vegan – gluten free, amazingly delicious, just store it carefully so it doesn’t melt)
White Chocolate Coco Pops Slice
Homemade Cherry Ripe
Mars Bar Cornflake Slice
Chocolate Cookie Dough Pretzel Things

Chocolate Cookie Dough Pretzel Things: I ain’t delivering them to you anymore so make your own! Everyone will love you eternally, and buying peoples’ love with gifts is what Christmas is all about.
Because I am an actual darling, I also give you a bonus recipe which I made for myself on the hop when some plans I’d had fell through and I’d also had two large craft beers. I had more or less nothing with which to scrape together a meal, and then was all What Would I Do? in that same way that people might ask what Beyonce would do. After all, I wrote a cookbook with a chapter full of food you can make yourself when it’s getting late and you’re feeling seedy. And thus, with only three ingredients, was born the following:

Spaghetti with Buttery Breadcrumbs.
Cook as much dried spaghetti as you wish to eat in a large pot of boiling water till tender. Meanwhile, take three slices of white bread from the packet and kind of crumble and rough them up in your hands till they have all broken up into irregularly sized crumbs and bits and general bready rubble. Melt around 50g butter in a large pan and once it’s sizzling, throw in the breadcrumbs and stir them around till golden and crisp and fried. Drain the spaghetti, stir in the crumbs, eat.

I’ve heard of a similar method of topping your pasta dish with breadcrumbs referred to as Poor Man’s Parmesan but that is both ickily classist and misleading. Crunchy, butter-soaked breadcrumbs don’t need to be hidden by pretending to be something else. They’ll make your pasta taste utterly fantastic and so that’s why I’m calling them what they are. Plus all those carbs will both act as blotting paper to anything you’ve had to drink and will zap you into a calming, mellow stupor. Which is so necessary at this time of year and also always. Happy holidays to you all, but also just, like, happiness to ya too.
__________________________________________________________
title from: the splendid Regina Spector and her song Ne Me Quitte Pas. It’s French, for don’t leave me!
__________________________________________________________
music lately:
Turkey Lurkey Time. DUDE. No wonder I wasn’t feeling Christmassy, I forgot to watch this! It’s a scene from the 60s musical Promises Promises and features a spectacularly rubber-limbed Donna McKechnie and also just the most stupid lyrics you’ll ever hear. But the dancing is incredible and I don’t quite know why but the end makes me all gaspy and faster of heartbeat every single time.
Beyonce, XO. It’s a full year since Queen B simultaneously blessed us and messed with the music industry by dropping her actually perfect self-titled visual album. It has been the soundtrack of my year in many ways and this song still gives me that headrush feeling of giddy happiness that it did upon first listen.
Oh Land, Sleepy Town. I’ve been listening to so much Oh Land lately, her music is so dreamy and yearning and poppy.
Tove Lo, Habits (Stay High). It just gets to me.
__________________________________________________________
next time: I don’t know what I’m gonna make but I will be blogging again before Christmas for sure. Fa la la la la!

One thought on “if you are the ghost of christmas past then won’t you stay the night?”