pop, pop, pop that thing
Kinda considered opening with an apology for both (a) popcorn being barely a recipe and (b) not having blogged for a lil while now, but have you considered this: Popcorn? It’s so great! Also I’ve been really busy and have only just had time to sit down and blog and even then I don’t actually have time to sit down and blog which is why I’m propped up in bed at 6am trying to make this happen. If you’re after an apology, I’m sorry, really truly sorry, but it’s not going to happen.
Mate, what a week though. I flew up to Auckland last Sunday to go to the Laneway music festival the following day, staying with my little brother in the spare room in his impressively central apartment (seriously, I was like, I cannot reciprocate this generosity. I have a patch of floor in the hallway for you, at best.) I caught up with some friends on Sunday night, filling an hour or so wait for a table at the Federal Deli with a drink at the casino across the road – I’d never been to one before and it was kinda weird, I couldn’t tell whether I was going to be sucked into a new life sitting at a slot machine or if George Clooney was going to leap out from behind a croupier to impel me to commit a heist – in the end all that happened was I drank a house pinot gris. The company was rad though and it was fun being all Out And About In Auckland which I generally get to do about one and a half times per year.

bright lights big city
Laneway though! As soon as I got there I was hit with feelings of wait, I don’t like crowds unless they’re in front of me and I have a microphone and carte blanche to ad-lib; I immediately fry in the sun like a kernel of popcorn over a skillet; I am cranky and short and what am I doing here…Fortunately the universe smiled benevolently and it was to be a singularly perfect day full of good fortune and friendly vibes and beautiful gal pals and incredible music. Let me just briefly say, FKA Twigs separating every molecule of her body while she danced and St Vincent snarling and yelping while dancing with brittle angularity and Angel Olsen and Courtney Barnett and Jungle and heck, even Belle and Sebastian, whose audience we were adjacent to while waiting for FKA Twigs. I’m only really a fan of one or two of their songs but they were so affable and we were so full of anticipation that it was all wonderful, in a very ‘getting there is part of the journey’ kind of way.

I’m not even there yet, there being the point where I ate this popcorn. Because the day following Laneway, I went and stayed with my parents for a few days, which, having not been home since September, it would’ve been way remiss of me not to do. I had a very good time hanging with Roger the cat, who had had an operation on his leg and needed constant head pats; seeing family that it had Been Too Long since I’d last seen; being with Dad on his birthday for the first time in ages and getting to make him a birthday cake; picking up some treasures from the Waiuku op shop; watching well made British period dramas with Mum, running into wonderful ex-teachers of mine, and all those other being-home type activities.

And then I came back to Wellington and Kate and Jason and I threw a truly excellent housewarming party (okay, they own the house and I just parasitically lodge there! But it was also something of a ‘bye Laura’ party since I’m moving around the corner soon.) There was dancing, there was glamorous rum punch, there was raucousness, there was gazing at the (truculently hidden by clouds, but still) stars on a blanket on the lawn; there were so many glorious friends there and amazing snacks and ugh, I just love having parties so much. The next day there was an abundance of $5 Pizza Hut pizza (I typed in Pizza Hug by mistake into Google and could’ve almost cried with how appropriate that was and also I was a bit hungover) and coffee and Broad City and sluggishly snuggling. 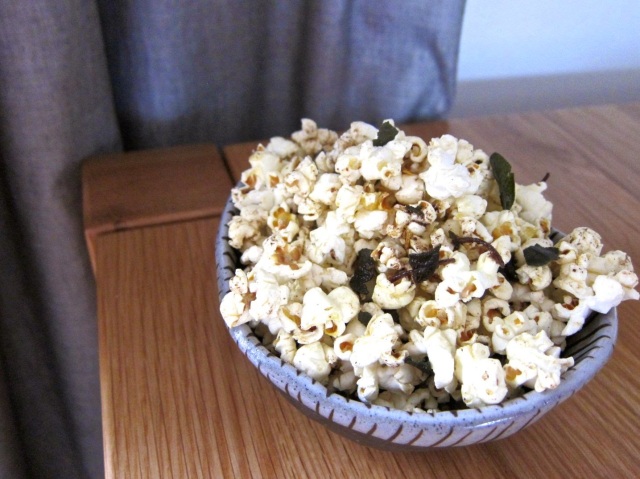 gonna talk about how amazing this popcorn is, any second now

So finally, this brings me to this popcorn. Getting there is part of the journey! Instead of, you know, feeding myself on a regular basis with a variety of produce, I tend to go through brief flurries of obsession with a particular foodstuff, followed by a long period of completely forgetting about it. Popcorn is one such foodstuff. For a while I was eating it nonstop, and then suddenly I was a person who went eleven months in possession of three tupperware containers of popcorn kernels and also a half-filled plastic bag of kernels held closed with a twist-tie.

The other day out of nowhere, with absolutely no cool story or provenance, it just happened, I said unto Kate: “I bet fried sage popcorn would be really good”. And then yesterday, I made myself some. And it was amazing. See, aren’t you glad I did all this gallivanting around the country with activities, otherwise this tiny paragraph is all that the blog post would’ve been! I…can also see how that might be preferable to some. If it is, I’m not sure why you’re persisting with my writing though, because this is fairly standard behaviour for me. I can be succinct when I’m dead! But also right now, because this recipe could not be more succinct. A small reward for you after all this rambling, I guess.

a recipe by myself.

Melt the butter in a heavy-based frying pan. Add the sage leaves in a single layer and let them cook in the sizzling butter, till they darken and curl at the edges a little. Remove from the heat while you make the popcorn. Place the olive oil and popcorn kernels in a large saucepan, and put the lid on top. Let it sit over a low heat, till the corn starts to pop – keep an eye on it, shaking the pan occasionally, till as much as possible has popped. Remove from the heat (it might continue to pop for a little longer) and spatula the sage leaves and butter into said popcorn, stirring gently to disperse the crisp leaves throughout. This serves two as a snack.

So this is magnificently delicious, people. Crisp, buttery sage leaves with their resinously herbal flavour and wafer-thin crunch work perfectly with the puffy, porous, pleasingly alliterative popcorn. The flavour of the sage works its way into the butter, and it’s just a salty, textural, vaguely sophisticated yet childish-party-food-like joy to eat. I can’t recommend fried sage leaves enough, frankly. Just fry a pile of them and eat them unadorned on their own, you’re still in for a good time.

PS my hair is now lavender and silver-grey! I feel like it’s my favourite incarnation yet.

I look perturbed, but it’s only because I’m trying to come to grips with how bowl-cut my hair has become. I’m talking large practical mixing bowl here. I can’t afford a trim, okay! But will continue to distract myself and us all from this with strange colours.

PS once more, I can’t believe I forgot to mention this in the last blog post, since I love being interviewed so much – I’m in the February issue of Next magazine! I was interviewed as part of a story about teenage ambition and where you actually ended up and how you feel about your life (it’s more positive than it might sound), and it was so fun to participate in. And Angelina Jolie is on the cover! Highly decent company to be keeping.

Marina and the Diamonds’ brand new track, I’m a Ruin. I love this woman, she just keeps on doing her.

Drake and Nicki Minaj, Make Me Proud. OH, DRAKE. Of course I will. I love when these two work together, and also Nicki Minaj talking about how great her life is going is highly inspiring stuff.

Courtney Barnett, Pickles From The Jar. It’s laconically exuberant and I love it. She was so great at Laneway.